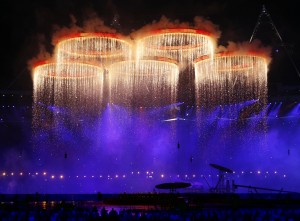 Danny Boyle’s Olympic opening ceremony has set off so much discussion that John Wyver of Illuminations has now posted three blog posts each listing ten different pieces that have appeared in the press looking at the event from different viewpoints. Here’s the third one, but you can find them all by checking back on his blog.

It was a celebration of individuality rather than conformity: no massed ranks of perfectly synchonised bodies, but a gloriously eclectic mix that marked the eccentricity, creativity and achievement of Great Britain.

One of the most influential figures was the unseen but not unheard poet William Blake. His poem Jerusalem (actually the preface to his poem dedicated to John Milton), was put to music by Sir Hubert Parry in 1916 and has since become an unofficial English National Anthem. Not only were his “green and pleasant land”, and “dark satanic mills” physically created in the arena, but the “chariot of fire” and “burning gold” was reflected in the forging of the Olympic rings. Chariots of Fire was adopted as the title of the 1981 film about athletes in the 1924 Olympics: the iconic music was performed live during the ceremony, Rowan Atkinson as Mr Bean imagining himself in the scene where the athletes run along the beach at St Andrews. 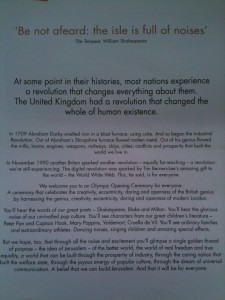 Programme note from the Opening Ceremony

Shakespeare’s part in the opening ceremony was more obvious but actually less important than Blake’s. The title for the whole show, Isles of Wonder is an approximation of words spoken by Caliban about the magical island in The Tempest. A line from this speech is inscribed on the huge bell which was rung at the beginning of the ceremony and Kenneth Branagh, dressed as Isambard Kingdom Brunel, delivered the whole thing.

Blake was a trained engraver who wrote poetry and prose, painted, drew, and took complete control of the books he wrote. Intensely spiritual, he invented his own eccentric mythology and has always been seen as a genuine original, impossible to pigeon-hole or pin down. 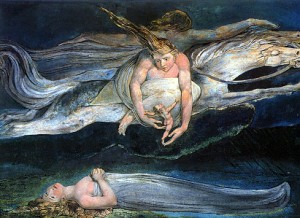 His most direct reference to Shakespeare is the painting Fiery Pegasus, or A spirit vaulting from a cloud to turn and wind a fiery Pegasus, a pen and watercolour picture from 1809 which Siri Vevle spoke about earlier this year at the British Shakespeare Association conference. The quotation that inspired the image is the description of Prince Hal, ready for battle, from Henry IV Part 1: 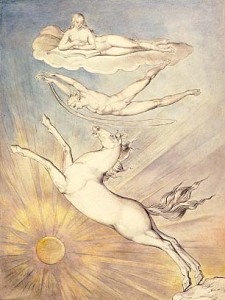 I saw young Harry with his beaver  on,
His cuises on his thighs, gallantly armed,
Rise from the ground like feathered Mercury,
And vaulted with such ease into his seat
As if an angel dropped down from the clouds
To turn and wind a fiery Pegaus,
And witch the world with noble horsemanship.

Blake’s description was “The Horse of Intellect is leaping from the cliffs of Memory: it is a barren Rock: it is also called the Barren Waste of Locke and Newton”, and the painting is a rejection of reason in favour of creativity and imagination. For Blake the most important thing was “the Human Imagination: which is the Divine Vision & Fruition / In which Man liveth eternally”.

With his view that “All things exist in the human imagination” it’s no wonder that Blake, along with Shakespeare, was so central to the Olympic Opening Ceremony with its celebration of humanity. 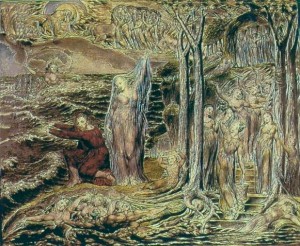 As an aside, I recently came across a Blake painting I’d never seen before, at Arlington   Court in Devon. It was found on top of a cupboard in a pantry in 1948. It was still in its original frame, having been purchased from Blake by the owner of the house in 1821. To add to its mystery it has no fixed title, known as either The Circle of the Life of Man or The Sea of Time and Space. With its prominent male and female figures, on the shore  of a stormy sea, a spirit flying above the waves it immediately reminded me Shakespeare’s The Tempest. You’ll find more images by Blake at the William Blake Archive.