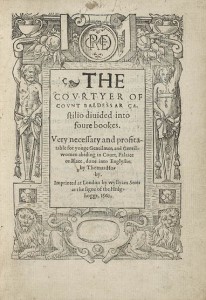 The Book of the Courtier

Earlier this week Amanda Vickery, in her radio programme  On… Men, looked at the concept of the ideal man, defined in Italy in the sixteenth century, which remained a standard for centuries. You can listen again here for a few days.

It was a book published in the Italy of 1528, using the relatively new technology of printing, that caused the spread of this idea throughout Europe. It was written by Baldassarre Castiglione and it was called The Book of the Courtier.

Castiglione was a nobleman who spent many years at the Ducal palace of Urbino, the setting for the book and the most refined and elegant palace in Renaissance Italy.

The Palace of Urbino

The book demanded that noblemen should be more than warriors, with social as well as physical skills, and to be cultivated: to be a musician, to appreciate art, to have beauty of countenance and person, to wear fashionable clothes made of silk, to be graceful but also manly.

The distinguishing feature for a sophisticated gentleman was what was called “sprezzatura”, or nonchalance. A gentleman should never show the effort required to be charming. He needed restraint and strenuous self-control.

Listening to the programme I was reminded of the beginning of Richard III. At the end of a period of vicious civil war, peace is established under the leadership of Richard’s eldest brother. But Richard has none of the attributes that Castiglione suggests a courtier needs.
Grim-visaged war hath smooth’d his wrinkled front;
And now, instead of mounting barbed steeds
To fright the souls of fearful adversaries,
He capers nimbly in a lady’s chamber
To the lascivious pleasing of a lute.
But I, that am not shaped for sportive tricks,
Nor made to court an amorous looking-glass;
I, that am rudely stamp’d, and want love’s majesty
To strut before a wanton ambling nymph;
I, that am curtail’d of this fair proportion,
Cheated of feature by dissembling nature,
Deformed, unfinish’d, sent before my time
Into this breathing world, scarce half made up,
And that so lamely and unfashionable
That dogs bark at me as I halt by them.

As he can’t become a courtier he decides to be a villain, to dissemble, the usual behaviour of the medieval figure called the Vice. Needing a wife he aims to marry the widow of a man he killed during the wars. The wooing of Lady Anne is an extraordinary scene. It isn’t graceful: she spits at him, he offers her his sword for her to kill him. But he finds that even without the smoothness of the courtier he’s able to persuade her using “the plain devil and dissembling looks”.  Her first husband was one of Castiglione’s ideal men:
A sweeter and a lovelier gentleman
Fram’d in the prodigality of Nature,
Young, valiant, wise…

And when she has accepted his ring, he tells the audience that he’s going to become a courtier after all:
I’ll be at charges for a looking-glass,
And entertain a score or two of tailors
To study fashions to adorn my body. 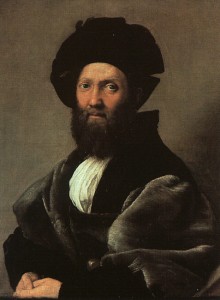 Raphael's portrait of Castiglione which hangs in the Louvre

Castiglione’s book would have been known by many people in Shakespeare’s time. Between 1528 and 1616, 108 editions of the book were published, and it was translated into Spanish, French, German, Polish and English. The English translation was published in 1561, just a few years after the accession of Elizabeth 1, by Sir Thomas Hoby. This is a link to a nineteenth century translation by Leonard Opdyke.

It was read by men of good breeding everywhere. But increasingly people in Elizabethan England who were not landowners were becoming wealthy and aspired to reach the status of gentlemen. They needed advice, and the book enabled them to learn how to behave. After Shakespeare’s day, in the 1630s, another book on the same subject, Peacham’s The Complete Gentleman, was published containing information aimed at the English reader, which was being read by quite humble people by the end of the 1600s.

Shakespeare himself was one of those Elizabethan social climbers who became a gentleman. What comments we have about his personality indicates that he took on board the advice of Castiglione’s book to be charming and self-controlled, to have his own “sprezzatura”.

This entry was posted in Plays and Poems, Shakespeare's World and tagged Amanda Vickery, Castiglione, Richard III, The book of the Courtier, Thomas Peacham, Urbino. Bookmark the permalink.