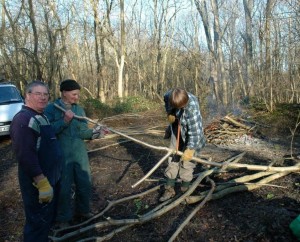 Even during Shakespeare’s lifetime, the ancient Forest of  Arden was in decline, and I’ve always undertood that all remnants of the forest were long gone, cleared in order to make way for the expansion of human habitation and agriculture.

When William Harrison wrote his Description of England in 1587, he commented that both England and Wales, “have sometimes been very well replenished with great woods and groves, although at this time the said commodity be not a little decayed in both”. He attributed the change to the increase in grazing for sheep and cows, the need for firewood, and the building boom.

An article in the latest edition of the magazine of the Warwickshire Wildlife Trust, though, challenges the view that nothing is left of the ancient woodland. It’s written by Steven Falk, an ecologist with twenty years experience of working in Warwickshire.  Surveys and aerial photographs are revealing information about the Warwickshire landscape including the surprising fact that some tree specimens may be over 2000 years old. 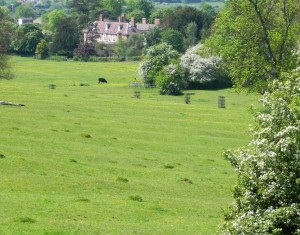 Ridge and furrow markings in the field, Clopton House behind

The River Avon marked the boundary between two distinct areas, the Feldon, cultivated land to the south, and Arden, forested land to the north, including the village of Wilmcote where Shakespeare’s mother came from. Where the forest had been cleared land was used for farming and the typical medieval ridge and furrow ploughing system can still be seen as close to Stratford as the fields surrounding Clopton House.

The area of Warwickshire stretching north of Stratford as far as Warwick and Coventry is still full of ancient features. Hedgerows can now be more accurately dated by finding woodland indicator plants such as native bluebell, primrose and wood anemone and woody species including hazel and small-leaved lime. These show that many of the remaining hedgerows are medieval, some perhaps a thousand years old. When the trees were cleared to make way for the field systems the hedgerows that were left to surround the fields were all that remained of the original Forest of Arden.

There are many indications of the past history of this area. Place-names ending in -ley signified that the settlement originated as a woodland clearing. Henley-in-Arden, Bearley and Oversley are good examples. And other place names such as Packwood and Four Oaks refer to landscape features. 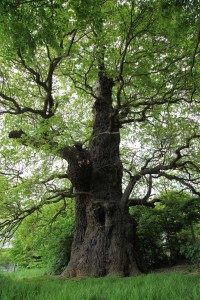 Over 500 old oaks with girths of over 5 metres are still standing in the Arden area  indicating they are around 300 years old. The largest English Oak in the area is at Stoneleigh Abbey near Coventry: with a girth of 9.2 metres it is estimated to be around 1000. Even in Shakespeare’s lifetime this would have been a very old tree,
an oak, whose boughs were moss’d with age,
And high top balk with dry antiquity.

Other ancient oaks are at Baginton, Ullenhall and Ragley Park. Many sweet chestnuts may be just as old but are more difficult to date. 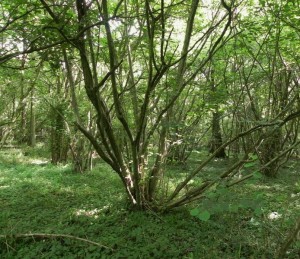 But some of the coppiced small-leaved lime or linden trees in Oversley Wood, between Stratford and Alcester, may well be as old as 2000 years. Coppiced trees have been cut back repeatedly so that instead of having a single trunk the tree develops a stool from which many branches grow. The wood was in effect a crop that could be regularly harvested with many uses including fuel and the making of cups and bowls. Other parts of the branches had their own uses: the  under-bark could be used to make rope and the leaves were fed to animals.

Coppicing is still carried out in some places for the benefit of wildlife, and the photograph shows a group of Warwickshire Wildlife Trust volunteers who have been coppicing at Snitterfield Bushes, another area of managed woodland near Stratford-upon-Avon.

See here for Steven Falk’s 2011 report on The Veteran Trees of Warwickshire.

These findings indicate that there are vestiges of the ancient countryside in Warwickshire, some very close to his own town. You might not be able to wander through the forest that Shakespeare knew, but individual oaks, hedgerows and coppiced trees are still a powerful link to the past.