Shakespeare for women: from Henry V to Julius Caesar 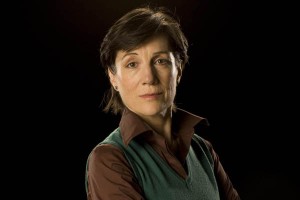 The announcement that an all-female Julius Caesar production is to be staged at the Donmar Warehouse in London from November to February has been greeted with excitement. Here’s Lyn Gardner’s Guardian piece. The production will be directed by Phyllida Lloyd and star Harriet Walter as Brutus and Frances Barber as Caesar.

We’re used to all-male productions by Propeller, and there have been a couple of all-male As You Like Its, one at the National, one by Cheek by Jowl. And there have been productions in which women take the lead, such as Fiona Shaw’s Richard II, and Helen Mirren as Prospera in a recent film of The Tempest. But all-female productions? One correspondent has mentioned an all-female student production of Titus Andronicus at LAMDA in the 1990s, but in the UK they are few and far between.

So you might be surprised to read this announcement which appeared in  the Stratford Herald on 12 August 1921. “A female Hamlet is not a novelty. We have had Sarah Bernhardt, Miss Marriott and Mrs Bandmann-Palmer as the Prince of Denmark, but a Shakespearean production played entirely by women is rare. The Memorial Theatre, Stratford-on-Avon, will, therefore, on Tuesday afternoon next be the scene of an interesting experiment, when King Henry the Fifth will be played by Miss Marie Slade’s Company…[when] every speaking and non-speaking part will be essayed by ladies”.

The performance itself on 16 August evinced much interest, in spite of being a matinee, and remains, as far as I’m aware, the only all-woman performance of Shakespeare in Stratford.  The Birmingham Post, writing the next day, called it “a very bold thing to do: …Miss Slade and her henchwomen, however, went into the adventure with remarkable vigour and came out of it with outstanding credit”. Marie Slade played Henry V. Hers “stood alone as a performance practically devoid of artificiality…Never coarse, never forced, her counterfeit masculinity sat lightly as a cloak of gossamer upon her, arming her capable to brave it among the manliest men that ever existed. Firm, resonant voice, measured tread, imperiously handsome features…yet modified just sufficiently to remind us of the women’s presence beneath the sex-disguise”.

Marie Slade’s Company had performed the play before in London: in June 1916 at The Queen’s Theatre and on 26 April 1921 at the Strand. It was conceived as a tribute to Lewis Waller, the most successful Henry V of his time, who had died in 1915. Slade’s production appeared under the auspices of Arthur Bourchier who had managed Waller’s production.

There had previously been comments that the play could only be performed by men, but the Stratford Herald commented “This belief has now been dispelled by a performance which fairly surprised everyone”. All the more unfortunate then that this production was not followed by others. I’ve not found any further mentions of Marie Slade, though one of her “henchwomen” was Fabia Drake playing the Earl of Cambridge and Mountjoy, who played leading roles in Shakespeare, including Lady Macbeth, a few years later.

In the 1970s The Women’s Theatre Group was founded, relaunching itself in 1974 as The Sphinx. Although this group mostly concentrates on women’s writing and directing it did include three women specialising in Shakespeare: Marilyn French, Dorothy Tutin and Janet Suzman, and Harriet Walter took part in Hamlet workshops. In her book Other People’s Shoes, Harriet Walter commented on women playing male roles: “We may occasionally take on the great roles, but until the practice becomes widespread, it is bound to be more about the player than the play”.

All-women Shakespeare companies are much less rare in the USA, where they tend to use Shakespeare in order to help give social and educational opportunities to women. Here are a few: 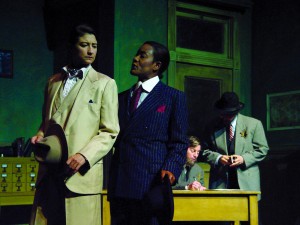 A scene from a LASWC production

Canadian Adaptations of Shakespeare: information about a 1986 production of Julius Caesar

I’ve also been told about other productions that have featured gender reversal including the Richmond Shakespeare Festival,Virginia’s Macbeth in 2010.

I’ve been asked to mention a special project being undertaken by one of these Women’s Companies, the Manhattan Shakespeare project, which has put their own work on hold in order to concentrate on Shakespeare For a New World: The Palestinian Voice. If you’d like to find out more, and perhaps contribute, here’s the website.

The project aims to use Shakespeare to create lines of communication between culturally diverse communities. Shakespeare really is the world’s playwright.

5 Responses to Shakespeare for women: from Henry V to Julius Caesar