Posted on September 7, 2012 by Sylvia Morris 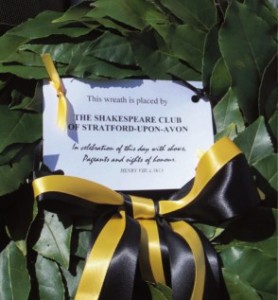 Shakespeare has been celebrated in his home town of Stratford-upon-Avon for centuries. David Garrick’s Jubilee in 1769 was the first major festival, but although it put Stratford on the map it had no lasting legacy. It was another fifty-five years before an townspeople themselves created an organisation devoted to preserving the memory of William Shakespeare.

This was the Shakespearean Club, founded in April 1824 at the Falcon Inn. The laws of the Club, created early in its history, still exist as do many of the Club’s early records. The aim of the Club was principally to arrange Shakespearian festivals, following the example of the Garrick Jubilee. Initially it was criticised for not being serious. One commentator described it in 1826 as “composed chiefly of the younger tradesmen of the town”, but the following year the Club ran a successful celebration of Shakespeare’s birthday, including a grand procession and the laying of the foundation stone for the Shakespearian Theatre which opened in Chapel Lane in December 1827.  It took responsibility for a regular celebration of Shakespeare’s birthday every three years, and by 1830 the Club had four hundred members and the patronage of the King. It was a mark of its success that a rival Club, the True Blue Club, was founded based at the Golden Lion Inn, though the two were never in serious competition. The celebrations in 1830 included a masquerade held in a special pavilion and in 1833 there was a ball and fireworks. Records of the early days of the Club include The Shakespearian Club Catch, sung at the Falcon Inn, as well as songs sung by the True Blues.

As well as jollifications the Shakespeare Club had a more serious purpose: it was the earliest organisation to take an  interested in the preservation of buildings associated with Shakespeare. It promoted and supported the 1847 purchase of the Birthplace which led to the formation of the Shakespeare Birthplace Trust and was responsible for the Tercentenary celebration of 1864, complete with specially-built pavilion. Along with King Edward VI Grammar School the Club inaugurated the annual processions to Holy Trinity Church.

By 1879  the Club lacked the financial resources to make more than a small contribution to the building of the Shakespeare Memorial Theatre, and the Club’s activities became restricted to two areas: the laying of a wreath on Shakespeare’s grave on his birthday and social events including the presentation of lectures given by distinguished speakers. The Victoria County History includes a full history of the theatres in the town, including the Club’s contribution, and the History page of the Club’s website includes more up to date information. 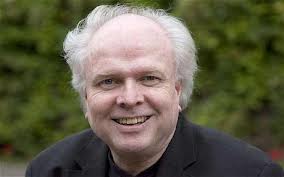 The new season of lectures begins on 11 September with a lecture entitled Putting a Girdle Round the Earth, on the history of Shakespeare societies around the world, by Dr Nick Walton. Later in the season this year’s President of the Club, the distinguished director Michael Attenborough, will talk about directing Shakespeare. Michael is the Artistic Director of the Almeida Theatre whose production of King Lear starring Jonathan Pryce is currently in preview.

Full details of these and the other lectures in the season are now up on the Club’s website. Visitors are welcome for individual lectures at £3 a time, and membership for a year is only £15, a real bargain. I have to admit an interest here as I’m on the Club’s committee, and we’re trying to increase the amount of information about past lectures that is on the website. The keeping of records about its own activities has been a feature of the Club for many years and with speakers of the calibre of John Gielgud, Jonathan Miller and Lilian Baylis the summaries of the lectures are of interest in their own right. The records of the Club are kept at the Shakespeare Centre Library and Archive where they can be freely consulted.

This entry was posted in Legacy, Stratford-upon-Avon and tagged Michael Attenborough, Shakespeare Club. Bookmark the permalink.