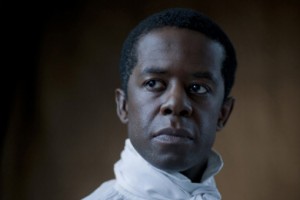 Until only a few years ago the nineteenth-century actor Ira Aldridge was a little-known curiosity in the long history of the theatre. He was the first (probably the only) “gentleman of colour” of any note to appear on the English or European stage until the early twentieth century.

His extraordinary life story has been told in several biographies published in the last 20 years or so, culminating in a two-volume study by Bernth Lindfors.  Now a new play, called Red Velvet, has been written and starring Adrian Lester is currently in preview at the Tricycle Theatre, London.  There’s an interview with Lester here.

During his lifetime Aldridge was a controversial figure. Battling against prejudice, he concealed his real origins from a poor family in the USA, spreading the story that he was originally from an African royal family. His reputation stands on his work with Shakespeare, one of the few playwrights whose roles gave black actors the opportunity to prove themselves. As Othello some praised him for his dignity, acting skill and the quality of his voice. Pictures certainly emphasised his nobility in the role. 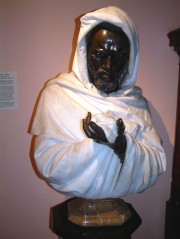 Images of him were popular: I’m indebted to Amelia Mariette, Collections and Exhibitions Curator,  for sending me a photograph of a bust of Aldridge as Othello by Italian sculptor Pietro Calvi which is part of the Torre Abbey collection in Torquay.

But others criticised him for being uncivilised, and he didn’t help his case by failing to deny rumours that he had murdered one of his Desdemonas during a performance of Othello. Although this was a tactic to increase ticket sales there is a report from one Desdemona confirming that he was violent on stage. The contrast of his full-on acting with the formality of W C Macready and Charles Kean must have been significant.

Aldridge couldn’t make his living in Shakespearian roles, and he succumbed to the contemporary typecasting of black characters as low comedians, villains and minstrels.  These roles sustained him in many of his provincial tours. 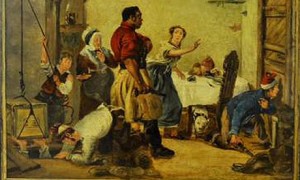 A fascinating oil painting has recently come to light, found in a garage in Birmingham, thought to show Aldridge. The focus is on the powerful and confident figure of Aldridge, dressed as a brigand. One man keeps a look out at the door, others hurriedly lower a crate of contraband through a hatch, and the two women in the centre look panic-stricken while a dog cowers under the table. Aldridge, bearing a gun, advances on the door.

Nobody has yet been able to identify the play in which he’s performing: it’s one of the difficulties of tracing nineteenth-century entertainments, especially in the provinces, that many texts have not survived. Some have: his most famous black role was the West Indian slave, Mungo, in The Padlock. This was already a well-known pantomime in which a white actor had played the lazy, drunken and greedy Mungo, beaten by his master and made to sing and dance on command. Aldridge made it a more serious role, showing his versatility by performing Othello and Mungo on the same evening.

Another of his roles was Zanga in The Revenge.  With a Spanish setting it’s a bloodthirsty play in which the wronged Zanga eventually gets his revenge on the man who has turned him into a slave: 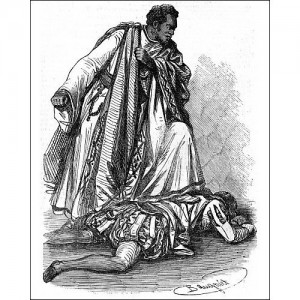 Look on me. Who am I? I know, thou sayst,
The moor, a slave, an abject, beaten slave:
(Eternal woes to him that made me so!)
But look again. Has six years cruel bondage
Extinguish’d majesty so far, that nought
Shines here to give an awe of one above thee?

Three Fingered Jack was originally a pantomime, rewritten as a melodrama in which Aldridge starred. It was based on the real story of an escaped Jamaican slave who becomes the leader of a rebel group before being captured and killed.

None of these sound quite like the play that’s portrayed in the picture. I’ve found a reference to The Black Brigand of Jamaica  and another play called The Robbers, but haven’t found a text or description of either that might confirm it.

In the mean time, Adrian Lester will portray this complex man on stage. Press night at the Tricycle is on the 16th October: look out for the reviews.