Macbeth from stage to film 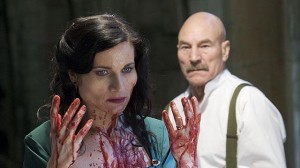 Kate Fleetwood and Patrick Stewart as the Macbeths

Macbeth is one of the most-filmed of Shakespeare’s plays, and no wonder. According to  Daniel Rosenthal in his book Shakespeare on Screen, “From its supernatural opening to its gruesome climax, Macbeth is the Shakespeare play that reads most like a film script”.

So it seems a contradiction that some of the most successful films of Macbeth are actually based on stage productions. I’ve only just caught up with Patrick Stewart’s film, shot in 2010 by the company Illuminations which had already produced the film of Hamlet starring David Tennant. Rupert Goold’s production began life at the Chichester Festival Theatre before a sell-out run in the West End and on Broadway. Goold won Best Director and Patrick Stewart won Best Actor in the Evening Standard Theatre Awards, and both Patrick Stewart and Kate Fleetwood were nominated for Tony Awards for their roles as the Macbeths. The actual filming, following months during which the cast had developed their performances to perfection, took a mere three weeks.

After a couple of TV showings the film has just received what’s thought to be its first cinema screening as part of the first Shakespeare Film Festival co-produced by the Shakespeare Birthplace Trust and Stratford Picturehouse. I took part in a pre-screening discussion with Elizabeth Dollimore, Outreach and Informal Learning Development Manager for the SBT.

One of the subjects we talked about was the setting of the film, Welbeck Abbey in Nottinghamshire, a stately home built by a nineteenth-century recluse. The underground network of tunnels, corridors, kitchens and even a ballroom with no windows are perfect for building up the sense of claustrophobia which they had created in the theatre.  This unsettling atmosphere also helped when it came to illustrating the changes in the world of the Macbeths.

Lady Macbeth and the witches turn the idea of the woman as nurturer upside down. As Lady Macbeth Kate Fleetwood chillingly scorns her husband’s reservations:
I have given suck, and know
How tender ’tis to love the babe that milks me:
I would, while it was smiling in my face,
Have pluck’d my nipple from his boneless gums,
And dash’d the brains out, had I so sworn
As you have done to this. 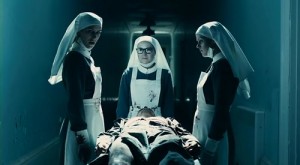 And the weird sisters extend the idea of women behaving unnaturally. First as nurses, then preparing food in the kitchen, then serving it at the ill-fated banquet, all these normally caring activities become threatening, even deadly. Bringing the witches into the castle, they invade what should be a safe and secure space, and their evil presence makes the film continually unsettling.

Other stage versions that have been made into films include that directed by Trevor Nunn in the 1970s starring Ian McKellen and Judi Dench and Greg Doran’s version starring Antony Sher and Harriet Walter,  in which the witches also appeared in the castle, erupting from beneath the table on which the banquet had been set. There, though, they were invaders: in the Goold film they are part of the household: the evil they represent is always there if we decide to invite it in.

The Macbeths are Shakespeare’s closest couple, sharing their thoughts and ambitions. But the evil they invite in drives them apart and sets them on the road to madness and disaster.

Daniel Rosenthal statement confirms that the play offers a film director many opportunities for action sequences and special effects, whether it’s the appearance and disappearance of the witches, apparitions, battles or murders. The 1971 Roman Polanski film starred Jon Finch and Francesca Annis as a young, beautiful and successful couple. Polanski took advantage of the cinematic possibilities of the play, revelling in location shots of moors, mountains and the castles of Lindisfarne and Bamburgh. Every murder was graphically filmed, including those only described in the text, and the apparition scene turned into a drug-induced orgy. With the emphasis on the visual, inevitably the text was heavily cut.

Goold’s film focuses on the psychological side of the play. The fear of violence is more unsettling than graphic bloodshed: one courtier’s hand trembles, another discovers that a room is bugged, and another character watches a newsreel of a huge, unstoppable military parade. One of the most impressive filmed versions, it’s definitely worth chasing up on DVD.

According to organiser Marion Morgan next year’s Festival is already being finalised, so keep a look out for this next fortnight of Shakespeare on film.

3 Responses to Macbeth from stage to film