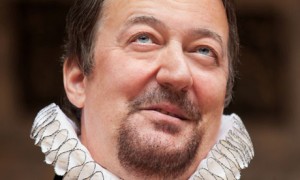 It seems Stephen Fry can do no wrong. Whether he’s fronting his comedy series QI, writing both fiction and factual books, tweeting, creating radio and TV documentaries or acting, his status as national treasure is assured. Speaking openly about the mental problems which triggered his much-publicised walkout of Simon Grey’s play Cell Mates in 1995 has only endeared him to audiences even more. Stage acting has been off his substantial menu ever since, but now he’s back.

Fry is playing Malvolio in Shakespeare’s Globe’s Twelfth Night, a revival of the original practices production staged 10 years ago in 2002. It’s a complete sell-out at the Globe, and the press night won’t be for several weeks, after it has transferred to the Apollo Theatre. There, in the centre of London’s theatreland from November 2 it will be seen in tandem with Richard III. 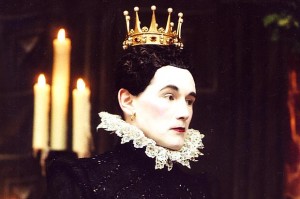 Reprising their roles from the original production is Mark Rylance playing Olivia (for which he was nominated for an Olivier award) and Paul Chahidi as Maria, and among the rest of the high-profile cast is Roger Lloyd Pack as Sir Andrew Aguecheek. Twelfth Night is one of Shakespeare’s most popular comedies and Malvolio, Olivia’s uptight steward who is tricked into believing his employer is in love with her, a gift for an actor as popular as Fry.

In spite of the lack of a press night, a few reviews have crept out, from the Daily Telegraph, the Guardian online, and Bardathon. I thought the original production was heavily weighted towards Mark Rylance, easily the most high-profile actor in the cast. It sounds as if the current production is better balanced between the different elements of the play, though nothing I’ve read suggests that the Viola/Sebastian plot gets much of a look in. The delirious audience reception seems to be well-deserved.

Fry is well known for his encyclopaedic interests and his love of Shakespeare. Earlier this year he recorded a piece in the series My Own Shakespeare for Radio 4.

I’d like to thank Peter Kirwan, who also is responsible for Bardathon, for reminding me of the Shakespeare Masterclass which Fry performed with his great friend Hugh Laurie as part of the Cambridge Footlights back in 1981. Hopefully his rehearsals for Twelfth Night weren’t like this.

The sketch remained in the pair’s repertoire for several years: a version performed at the Nether Wallop fete in 1984 has also been  posted on YouTube.

One Response to Stephen Fry’s Shakespeare: from Cambridge Footlights to Twelfth Night at Shakespeare’s Globe