Chaos, Jack Cade and the men of Kent

But then are we in order when we are most out of order. 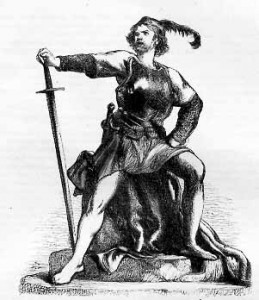 This contradictory line is spoken by the rebel Jack Cade in Shakespeare’s play Henry VI part 2. In his very first history play Shakespeare chose to explore issues of rebellion, authority, and the importance of maintaining order, which would be central to all the later history plays and others.

Last week’s meeting of the Stratford Shakespeare Club was a lecture on Jack Cade by Professor Stuart Hampton-Reeves. His aim was to re-evaluate Cade, who he feels has recently been unfairly demonised. During the nineteenth century, when Shakespeare’s play was rarely staged, Cade was thought of as a political hero, particularly in the US where his revolutionary fervour was admired, and a play as written and staged about him. In the UK one of the foremost artists of the day, John Gilbert, created images of Cade for Howard Staunton’s 1858 edition of Shakespeare. Here is Cade, sword in hand, when he and his mob have arrived victorious in the centre of the City at London Stone. Cade is unkempt, but not barbarous, with more than a hint of Robin Hood about him. 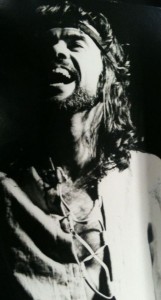 In the past 60 years there have been many productions of the Henry VI plays on stage and television. The three parts of Henry VI have often been conflated into two, resulting in the foregrounding of the violence of the Cade scenes rather than giving him and the scenes of rebellion space to develop. Apart from James Laurenson’s charismatic Cade at the RSC in 1977-8 (a full text version), he has tended to be either apolitically anarchic or a representative of the right wing National Front, as with Michael Pennington’s English Shakespeare Company performance in the 1980s. As indicated by that quote at the start of the post, Cade’s political views are a confused blend of wanting to hold proptery in common, to destroy learning, to abolish the aristocracy and, eventually, to be an autocratic dictator. To Lord Say, who Cade orders to be executed, he declares “I am the besom that must sweep the court clean of such filth as thou art”. But Cade makes his worst threats only after Stafford has proclaimed that his followers will be hanged in their children’s sight. Then 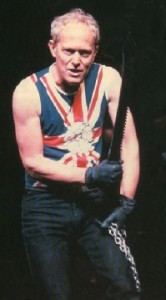 We will not leave one lord, one gentleman;
Spare none but such as go in clouted shoon,
For they are thrifty honest men, and such
As would, but that they dare not, take our parts.

Towards the end of the lecture Stuart Hampton-Reeves talked about Cade’s association with Kent. Shakespeare describes him as “a headstrong Kentishman, John Cade of Ashford”, yet in Halle’s Chronicles which Shakespeare used as his main source, he is described as an Irishman. Why this change, and why was Kent such an important county to Shakespeare?

I took a look at an important book, William Lambarde’s Perambulation of Kent. This book was written in 1570, published in 1576, and was the first county history published. William Dugdale’s History of Warwickshire did not appear until 1656. Lambarde’s book is modest in size and lacks illustrations apart from a fold-out map. He describes the abundance of Kent, rich in pasture, woodlands, fruits, cattle, deer and rabbits, and inhabited by many members of the gentry. It’s also near to the capital ” from which city (as it were from a certaine rich and wealthy seed plot) courtiers, lawyers, and merchants be continually translated, and do become plants among them”.

In Henry VI part 2, Lord Say describes Kent as
the civil’st place of all this isle:
Sweet in the country, because full of riches;
The people liberal, valiant, active, wealthy. 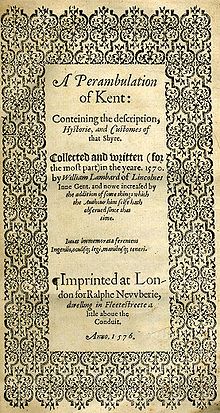 Title page of The Perambulation of Kent

Lambarde suggested that because of this prosperity, “nowhere else in this realme, is the common people more willingly governed”. As a Kentishman himself, he found it difficult to write about the three rebellions that broke out in the county: the 1380 Peasants Revolt, 1450 Cade rebellion, and a rebellion during the reign of Henry VII. “I cannot (without paine and pitie) enter into the consideration of these times and matters”, he writes.

Kent also had its own laws,  which gave inhabitants extra freedoms. The custom of “Gavelkind” prevailed in which men were freeholders rather than tenants, and every man “hath some part of his own to live upon”. Instead of primogeniture, which disinherits all but the eldest son, all the children shared the inheritance of their parents. Stuart Hampton-Reeves pointed out that Kent is also the setting for part of King Lear. Here we see both kinds of inheritance: in the Gloucester family the oldest son is expected to inherit, whereas the King splits his country equally between his three children. As well as being set partly in the county, the main voice of reason, exiled for his plain speaking, is the Duke of Kent. As with Henry VI, the disorder that follows is the responsibility, not of the system, but of the flaws of the monarch.