Shakespeare and the Russians 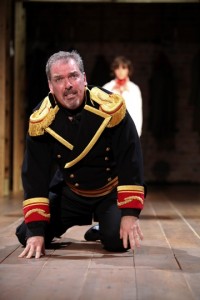 Lloyd Hutchinson as Boris Godunov in the RSC’s current production

17 February is the anniversary of the 1598 election of Boris Godunov to be Tsar of Russia.

Currently playing at Stratford’s Swan Theatre, Michael Boyd’s production of Adrian Mitchell’s version of Pushkin’s play Boris Godunov marks the end of Boyd’s leadership and the beginning of Gregory Doran’s. Boyd has talked many times about how much the year he spent working in Russian theatre in the late 1970s has influenced his directing and leadership style, and it’s fitting that at last he’s directed this version of one of the classics of the Russian stage, even if it is one that has treachery and greed at its heart.

Pushkin’s play was written in 1825, nominally set in Russia between 1598 and 1605. It’s a complex play about power, ambition and murder. Pushkin is as much Russia’s national poet as Shakespeare is England’s, and Pushkin greatly admired the way Shakespeare succeeded in writing about the grand scale of major events without losing sight of the effect of them on individual lives. And like Shakespeare Pushkin dramatised the power struggles of an earlier period while reflecting on the politics of his own age. 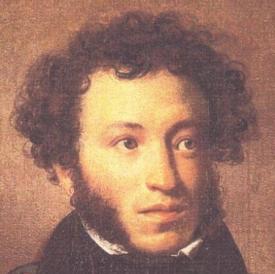 He claimed to have written Boris Godunov “according to the system of our Father Shakespeare” and indeed it owes much to his work. Following the death of Ivan the Terrible, Boris Godunov, seemingly reluctantly, takes the throne, but rumours arise that he has been responsible for the poisoning of the rightful heir, the child Dmitry. Some years later a pretender, Grigory, poses as the lost prince and leads an uprising to overthrow Boris. There is even an ambitious woman in the play. Pushkin makes Godunov a complex figure with both ambition and remorse, similar to Shakespeare’s Macbeth. And from the description of the plot above you can detect elements of Hamlet, Richard III and Henry VI part 2.

Pushkin’s play may have Shakespearean echoes, but one of Shakespeare’s own plays has recently struck a chord with Russians. Last year Gregory Doran’s “African” production of Julius Caesar toured to Moscow, and its warnings about how an established ruler might seek to enlarge his own powers was not lost to Russians uneasy about Putin’s return to the presidency. 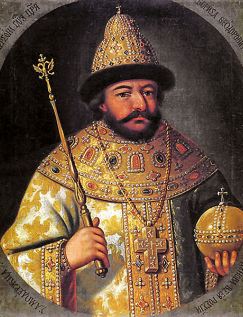 In an extraordinary document written by Sir Thomas Smythe in 1605, entitled Voyage and Entertainments in Russia, there is a comparison of contemporary events in Russia with Shakespeare’s play Hamlet, which Smythe must have encountered as part of the repertoire of the King’s Men in London. It follows Godunov’s sudden death, and the subject of the piece is the new Tsar, Godunov’s son Theodor.

His father’s (Boris Godunov) empire and government was but as the poetical fury in a stage action, complete yet with horrid and woeful tragedie; a first, but no second to any Hamlet; and that now Revenge, just Revenge was coming with his sword drawn against his royal mother, and dearest sister, to fill up those murdering scenes, the embryon whereof was long since modeled, yea digested, (but unlawfully and too, too vively) by his dead self murdering father: such and so many being their fears and demons.

This description is also interesting for what it tells us about how those first audiences reacted to Shakespeare’s plays. Not only did they expected the fictional events performed on stage to be relevant to those in the real world, but both the words and scenes in the plays were vividly remembered long afterwards.