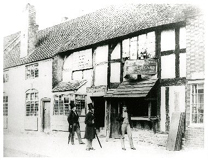 The question of how to celebrate the life and work of Shakespeare in the town of his birth is one that has caused much deliberation over the centuries. In 1847 the Birthplace, that “heart-stirring relic” was purchased for the nation not least to protect it from unscrupulous exploitation: over the previous century every item in the house that might have had a link to Shakespeare had disappeared, including as I mentioned in my last post a plaster panel that had been fixed to the wall. The town is amply provided with statues and other memorials, and in the 1860’s the idea of a permanent theatre devoted to performing his work gained ground, culminating in the Shakespeare Memorial Theatre, and the formation of the Royal Shakespeare Company.

As well as the houses associated with Shakespeare, and the theatres, large number of books, archives and artefacts related to him have been accumulated in the past 150 years or so. These have been available for study and research for many years, but after years of planning an exhibition of items from the vaults of the Shakespeare Centre has become a reality this week. 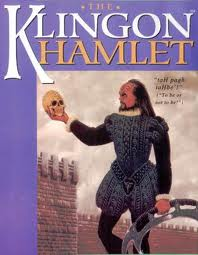 Shakespeare’s Treasures is available to anyone visiting Shakespeare’s Birthplace. It includes items reminding us of Shakespeare’s place in international culture: translations into a number of languages including Klingon (yes, really), and a little fan dating back to 1794 decorated with Shakespeare’s Seven Ages of Man in French. Some objects date from Shakespeare’s own period, and have been acquired for their relevance to life in the period: an impressive jug, a doctor’s travelling medicine chest, some gold coins, and there are documents that Shakespeare knew, preserved among local records almost by chance: the letter written to him by Richard Quiney and the conveyance for his house, New Place which he bought in 1597. Representations of Shakespeare over the years are included: the Ely Palace portrait which for many years hung in the Birthplace itself, the Soest portrait dating from the late seventeenth century, and the newly-acquired Shakespeare Birthplace Trust portrait (previously known as the Ellenborough portrait), a copy of the still-disputed Cobbe portrait, only identified a few years ago.

Other rarities include one of the finest copies of the First Folio from 1623, the Ashburnham, and items relating to the stage history of Shakespeare’s plays: a pair of Sarah Siddons’ slippers, a lantern Henry Irving used in his production of Hamlet, a photograph of Laurence Olivier as Coriolanus at the theatre in Stratford in 1959. It’s a gloriously eclectic mixture of objects, from a huge variety of sources, and a tribute to the many people who have sought to capture something of what has always made Shakespeare special.

But sadly none of his own belongings. And hard though it is for us to believe, his manuscripts, little valued in his own time, were never preserved.

Shakespeare can be elusive, even here in his own town. His plays are performed by the RSC, and as writers from Ben Jonson onwards have commented, it’s in the plays themselves that we find the man. The plays themselves though have only been preserved because of the technology of printing, and the desire to read and collect books in Libraries. 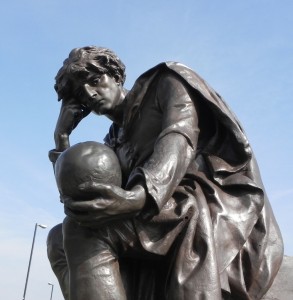 Hamlet from The Gower memorial

Shakespeare’s links with Stratford have been honoured for centuries, and in many ways, whether by creating a statue, holding a celebration, publishing volumes of essays and poetry, or more personally by leaving a lasting impression by scratching a signature on the window of the Birthroom or a quotation in the Birthplace’s visitors’ book. More recently visitors have appeared on the SBT’s website talking about their reasons for visiting the Birthplace. It’s important to recognise that people want to make their mark, however small, and to show people of the present that they are following in the footsteps of others who have done the same to show their love for Shakespeare’s work.

A few weeks ago a company that creates walking tour apps for smartphones asked if I would like to write a personal tour of Shakespeare’s Stratford. It’s now in progress and I hope will be launched within the next few weeks. I’ve tried to link places in Stratford and people he knew with themes and moments from his plays. In writing it I’ve become even more aware of how fragile are some of the points of connection between Shakespeare’s town and Stratford today, and how important it is to remember these connections when faced with constant pressure to build more houses and roads.

The SBT’s website also includes an online gallery including several of the items now actually on display, and a range of SBT items are on the Windows on Warwickshire website, while all the paintings are on the wonderful Your Paintings website.