Prospero’s Costumes on Display: In Stitches with the RSC 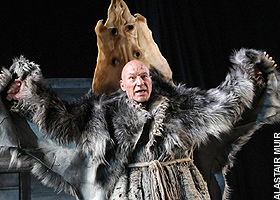 Patrick Stewart in The Tempest, RSC 2006

The RSC’s Costume Exhibition Into the Wild features three costumes for different Prosperos in The Tempest. It’s the play in which the designer can let his imagination run riot as he or she attempts to create a suitable setting for the mysterious, magical island and its inhabitants. Shakespeare seems to be deliberately hazy about the location of the island: he doesn’t want to make it too obvious what sort of world we are in. The costuming of the characters, too, is a challenge, particularly Prospero. Is he a tyrannical usurper, an affectionate father, a magician or a victim seeking revenge? The way in which he’s clothed can help answer this question. 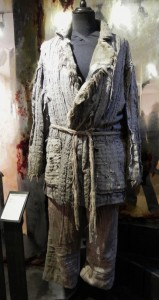 Each of the costumes in the exhibition tells a different story. Two of them are Prospero’s cloaks, the symbols of his magic powers and his most impressive costume. In the exhibition, though, the costume worn by Patrick Stewart in 2006, set in the Arctic, stands out for its plainness. This Prospero seems still to be wearing the clothes he arrived in. His magic cloak, which you can see in the photograph above, enveloped Stewart as he took part in strange, unsettling rituals. The costume designer was Nicky Gillibrand.

The other two costumes are from the 1952 revival of a production originally staged in 1951, completely recast, and from the 1982 production. The first was designed by the Australian Loudon Sainthill, the second by Maria Bjornson.

Sainthill originally had in mind Michael Redgrave as Prospero, a tall and imposing man. Reviews suggested his Prospero was dressed as a cross between a Druid and an old-testament Prophet, and photographs suggest his costume, like much of the rest of the production, was highly-decorated. 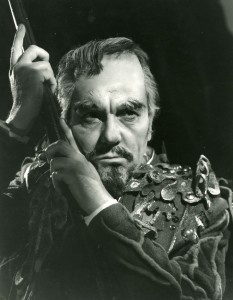 In 1952 Prospero was played by Ralph Richardson, a smaller man, and the costume was accordingly simplified. The original design still exists in the Shakespeare Centre Library and Archive, and shows a very plain garment. But photographs of Richardson confirm that the upper part of the costume as worn on stage was decorated with coloured stones, and with what appear to be seaweed fronds.

Looking closely at the costume itself you can see how crudely-made these are. Whereas the original costume emphasised the magical qualities of Redgrave’s Prospero, Richardson’s more down to earth Prospero was, according to the Spectator, “though human and likeable…dangerously deficient both in power and in the quality of wonder”. 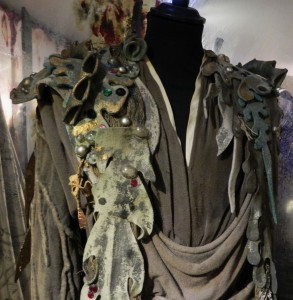 This was a pity: Sainthill’s designs were extraordinarily imaginative, conjuring up an exotic, eerie, underwater world. Roger Howells saw the play in 1951 and the design made a great impact on him. You can hear  about it below, just click on the orange arrow. (Anyone receiving this by email will need to go to the blog itself – the link is at the end of the mail)

Next to the costume worn by Richardson in 1952 is that made for Derek Jacobi in 1982. 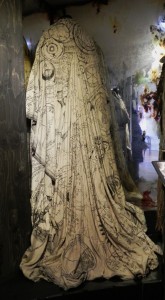 The cloak, decorated with magical symbols, left the audience in no doubt that his magic was of vital importance to this angry Prospero. The Daily Mail review commented “This is no grizzled wizard whiling away his twilight years on an enchanted island. He is a man who has clearly been deposed in his prime and is willing every demon in nature to extract his revenge”. 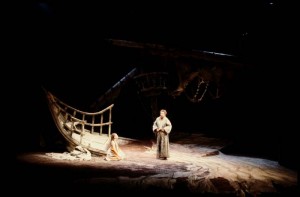 The Tempest 1982. Photograph by Donald Cooper

Bjornson’s set consisted of the skeleton of the boat in which they had arrived on the island, a constant reminder of the cruelty with which Prospero and Miranda were exiled from Milan twelve years before and which he was determined to revenge. It was a spectacular production, and Roger Howells, who was the Production Manager at the time, recalls some of the details of the design here.

I’m indebted for the quotations from reviews to David Lindley’s excellent book on The Tempest in the Shakespeare at Stratford series, published by The Arden Shakespeare in 2003.

This entry was posted in Shakespeare on Stage and tagged costume, Derek Jacobi, Into the Wild, Loudon Sainthill, Maria Bjornson, Patrick Stewart, Ralph Richardson, The Tempest. Bookmark the permalink.