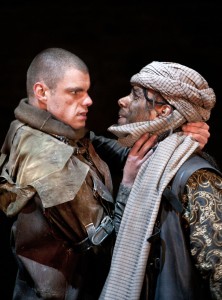 At the end of last week I wrote about the RSC’s current production of Titus Andronicus and the blogging event to which I was fortunate enough to be invited.

In that first post I put up a few clips I made at the Q&A with the director and some of the leading actors, talking about different areas of the play and rehearsal period. Much of the discussion was about the key issue of violence in the play, on which this post is going to concentrate.  Again, I apologise for the quality of the recordings, made at the Q&A. Mark Neal, another of the bloggers present has written his own review of the production and summary of the event.

Most commentators agree with the RSC’s description of it as “Shakespeare’s bloodiest and most violent play” : popular in Shakespeare’s own lifetime but thereafter neglected. Samuel Johnson could not believe that Shakespeare wrote any part of it, and declared that “the barbarity of the spectacles, and the general massacre which are here exhibited, can scarcely be conceived tolerable to any audience”.  With the magnificent black actor Ira Aldridge looking for suitable roles the play was revived in the nineteenth century, but heavily rewritten to make Aaron heroic rather than evil. Then the 1923 revival at the Old Vic, the first for many years, seemed to confirm Johnson’s view, the audience laughing at the final bloodbath. It took another 32 years and the casting of the greatest heroic actor of his time, Laurence Olivier, before the play was given another showing, this time in Stratford-upon-Avon.  The director Peter Brook defused the potential for unwanted laughter by ritualising the violence of the play. 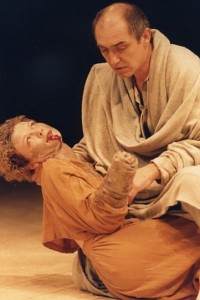 Since then there have been several productions at Stratford, including one featuring Patrick Stewart, directed by John Barton, which added a framing device to distance the play being performed by a band of travelling players. My favourite production was that in 1987, at the newly-opened Swan Theatre, directed by Deborah Warner (see photo to right).  I remember the simple but bold staging and costuming and the raw emotional power of the play. As a member of the audience I felt involved and drawn into the world of the play in spite of its obvious theatricality.

In this clip Michael Fentiman, the director of the current production, talks about staging the violence of the play, and the sense of austerity he has tried to maintain despite the expectations raised by the show’s video trailer.

Although the actual violence of the play tends to overshadow it, the subject matter of the play is very political. It expresses the anxiety of Elizabethans about the hottest subject of the day: what happens when the succession is unclear, or there are conflicting claims to the throne. The memory of the years after the death of Henry VIII would have been strong. And brutality was part of life, with bear-baiting for entertainment, public executions and the heads of traitors on display on London Bridge. In the Q&A, Stephen Boxer who is playing Titus talked about how Shakespeare discusses the dangers of tribalism and reminds us of the violence that is in all of us. 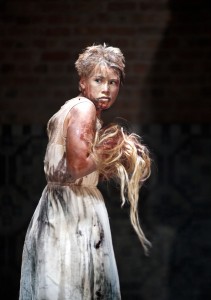 I’m uneasy at being expected to find violence entertaining, and I found the mixture of styles of costume and set in the current production distracting.  But after the wildness of the bloodbath in the final scene I enjoyed the quiet sense of ambiguity of the final moments of the play, when Young Lucius, surrounded by bodies, cradles Aaron and Tamora’s baby in one arm, a knife in the other hand. In this last clip the director talks about the three different endings which they rehearsed, which encapsulate the alternatives offered by the play.  Will one or both of these children fall prey to the violence of Rome, the “wilderness of tigers” or will they be the instruments of peaceful reconciliation, as Marcus hopes:
You sad-faced men, people and sons of Rome,
By uproar severed, as a flight of fowl
scattered by winds and high tempestuous gusts,
O, let me teach you how to knit again
This scattered corn into one mutual sheaf,
These broken limbs into one body.

For any of you receiving this post by email, you may need to click on the link to the blog itself at the end of the email then click on the orange circles to play the sound clips. Both the photos from the current production are by Simon Annand. And many thanks again to the RSC Press Office for organising and managing the evening and the actors and director for their performances and insights during the Q&A.

This entry was posted in Plays and Poems, Shakespeare on Stage and tagged blog, Royal Shakespeare Company, Titus Andronicus, violence. Bookmark the permalink.