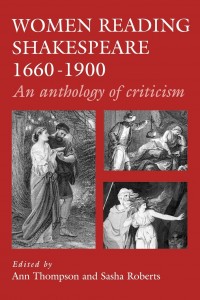 Margaret Cavendish, Duchess of Newcastle, is one of the less well-known early commentators on Shakespeare, yet her “Sociable Letter” on Shakespeare, published in 1664, is “the first critical essay ever to be published on Shakespeare”. This judgement appears in Women Reading Shakespeare, 1660-1900, edited by Ann Thompson and Sasha Roberts.

Others such as Ben Jonson and Thomas Fuller had written in general terms about his abilities and life, but Margaret’s letter, (probably in fact a fictional letter written as if from one woman to another), shows that she knows many of Shakespeare’s plays well, probably from reading them rather than seeing them performed on stage.

In the letter she defends Shakespeare’s plays from the charge that they  “were made up onely with Clowns, Fools, Watchmen and the like”. She continues “Shakespeare did not want Wit, to Express to the Life all Sorts of Persons, of what Quality, Profession, Degree, Breeding, or Birth soever”.

She perceptively observes that “to Express Naturally, to the Life, a Mean Country Wench, as a Great Lady, a Courtesan, as a Chast Woman, a Mad man, as a man in his right Reason and Senses, a Drunkard, as a Sober man, a Knave, as an Honest man,… nay, it Expresses and Declares a Greater Wit, to Express, and  Deliver to Posterity, the Extravagancies of Madness, the Subtilty of Knaves, the Ignorance of Clowns, and the Simplicity of Naturals, or the Craft of Feigned Fools, than to Express Regularities, Plain Honesty, Courtly Garbs, or Sensible Discourse.” 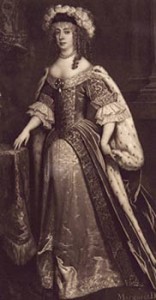 I wasn’t aware what an interesting life she led. Margaret was born in 1623, the daughter of a wealthy gentleman, and as a girl spent her life between Colchester and London. Inevitably her life was disrupted by the civil war, during which she became a maid of honour to the Queen, Henrietta Maria, going with her into exile in Paris where she met and married her husband.

William Cavendish was thirty years older than his wife, and recently widowed when they met. A staunch royalist, he had already been a courtier, close to Prince Henry, the heir to the throne who had died young. He had commissioned work by Ben Jonson and was a patron to both John Ford and James Shirley. Both William and Margaret were writers of drama, and were interested in science. Writing on the subjects of natural philosophy, Margaret commented on the writings of Rene Descartes and  Thomas Hobbes, and after the Restoration of the monarchy she attended scientific demonstrations by Robert Boyle and Robert Hooke. William wrote a number of songs, and plays performed in London in the 1660s, collaborating with Dryden and Thomas Shadwell. 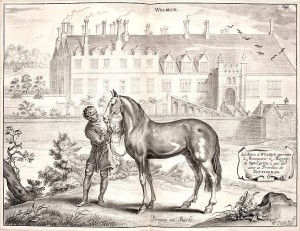 Welbeck Abbey in the 17th century

Though well-connected at court they spent most of their time at Welbeck Abbey in Nottinghamshire, at which they entertained lavishly. The University of Nottingham holds several archive collections relating to the family and this web page contains lots of interesting information about them.

There’s another tantalising Shakespeare connection. It’s known that in 1643 during the Civil War, the Queen, Henrietta Maria stayed in Stratford-upon-Avon on her way to Oxford, where the court in exile was held. King Charles I’s love of Shakespeare was well known and by tradition it is thought that she stayed at Shakespeare’s house, New Place, one of the largest houses in the town and still lived in by his daughter Susanna. 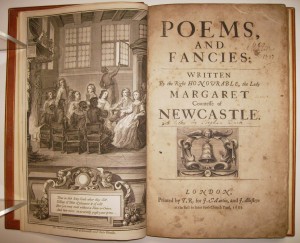 Poems and Fancies, one of Margaret Cavendish’s publications

Margaret Cavendish is thought to have become a lady in waiting to Henrietta Maria after her return to Oxford, just after this visit to Shakespeare’s home, so it’s unlikely she was there. And even more frustratingly William, who Margaret was to marry a couple of years later, had been accompanying the queen from the North of England to Oxford in May-June 1643, but was forced to remain in the North to combat Parliamentarian forces. Otherwise he would have been with her when she stayed in Stratford too. Knowing that both Margaret and William were admirers of Shakespeare it’s a pity that both missed the chance to meet his daughter and stay in his house, and to write about the experience.

Margaret was a women of extraordinary talent, though known as an eccentric. When she died in 1673, several years before her much older husband, she was buried in Westminster Abbey after a funeral procession that wound through the streets of London. And William gathered together and published her writings, Letters and Poems in Honour of the Incomparable Princess, Margaret, Duchess of Newcastle, work which is gradually receiving the attention it deserves.