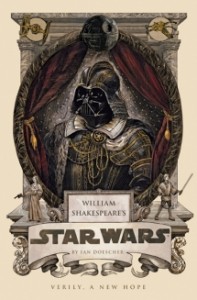 It’s only a month since I wrote a round-up covering some of the new developments and forthcoming events, but, well, it’s been a busy month.

First off, and probably the publication that’s got the most attention, is the new book published at the beginning of July, Shakespeare’s Star Wars, by Ian Doescher. This book is a retelling of the story of Star Wars in the style of Shakespeare, that is in iambic pentameter.

Its target audience is children for whom it might be a gateway into Shakespeare, the premise being that “they already know the storyline so they won’t have trouble following what’s happening.”

Phrases in the book include “Alas, poor stormtrooper, I knew ye not” and “Friends, rebels, starfighters, lend me your ears, while Han Solo at one point enquires “Is this an ast’roid field I see before me?”

I have to confess I haven’t read this book yet, but I can see that Shakespeare fans will  enjoy recognising the quotations, and as they say, “the chance to read about duelling with light-sabres  while trading lines in verse” should be a winner. There’s an informative review here.

Looking at the lighter side of the Shakespeare world, anyone who’s had enough of reading about anti-Stratfordian theories of who else might have written Shakespeare’s plays other than Shakespeare might enjoy Grace Tiffany’s latest post, Shakespeare in Fiction and Fact. She lets her imagination run riot with the idea that Shakespeare writes everybody else’s plays including Jonson, Marlowe and many others.

Another approach to helping young people enjoy Shakespeare’s plays is being created by Shakespeare At Play, a company that produced video performances of Shakespeare’s plays embedded within a fully annotated and uncut version of the text. “Readers can scroll along with the text as they watch the action unfold, so that they can experience Shakespeare’s plays the way they were intended: in performance, brought to life by the human voice, loaded as it is with tone, nuance and subtlety. Shakespeare At Play’s productions are simple and easy-to-follow, with a focus put on the clarity of text and the ease of the story. The actors are in simple, modern dress with few set pieces, props or other modern theatrical embellishments to muddy up the storytelling.”

The people behind the company are all alumni of the University of Toronto Drama Program, committed to finding ways of using technology in education. As well as the performances each scene is introduced with an audio clip providing a synopsis of the scene as well as things to look out for.

So far Romeo and Juliet and Macbeth are available in the Apple iBooks store  and Hamlet  will be released in mid-October.  The Shakespeare at PlayApp is also due for release soon and there’s more information on the website. 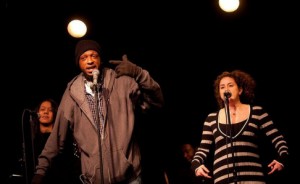 With his manager Arje Shaw he’s now looking for support so that he can reach more students worldwide, and is running a Kickstarter campaign. Do take a look and help out if you can. 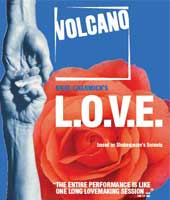 Another project based on the Sonnets is the show called L.O.V.E. This production by the Swansea-based theatre company Volcano is being performed at the Edinburgh Fringe during August. The company is celebrating its 25th anniversary by reviving this, one of the most successful of its productions, with a totally new cast.

It’s described as “an exuberant, sensual and violently passionate piece of landmark theatre” which has won a number of awards. Using verse, song and dance its style is raw, energetic physical theatre. Sounds great, and here’s the link. Let’s hope they have a wonderful time in Edinburgh. 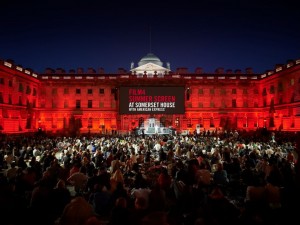 One of the most powerful Shakespeare films ever made is Akira Kurosawa’s Throne of Blood, a version of Macbeth in which a samurai warrier and his scheming wife plot murder, with the inevitable consequences. Even after fifty years it’s still greatly admired, and on 15 August it’s being screened outdoors  in the glorious surroundings of Somerset House in London. On the same day there is also a lecture about the film, and details can be found here. 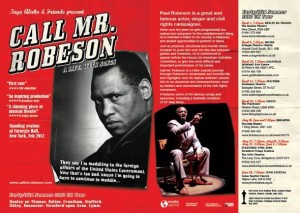 Looking forward a little further, Tayo Aluko is performing his one-man show Call Mr Robeson. It’s based on the true story of one of the most famous Othellos of all time, Paul Robeson, and Mr Aluko has not only secured a four week run for his play at the Tristan Bates Theatre in London’s Covent Garden during October, he’s also organising a festival in London called Art is a Weapon. This will bring in acts from Canada, South Africa, Nigeria and the UK during Black History Month. Look up the link for more information about this great event.