Warwickshire witchcraft: Macbeth and the mystery of Meon Hill

Posted on September 5, 2013 by Sylvia Morris 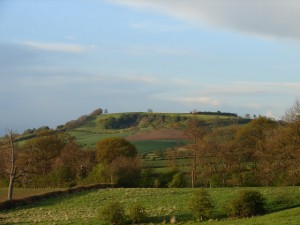 “And over there, the hill with the flat top, that’s Meon Hill”. The guide at the top of the RSC’s tower didn’t need to say more, knowing we were locals. With our guest for the weekend we were admiring the way that from the tower you can see how Stratford nestles in the valley below many hills: the Cotswolds, Bredon Hill, the Welcombe Hills and, yes, Meon Hill above the villages of Mickleton and Lower Quinton.

For many people Meon Hill is still a mysterious, threatening, spot. In spite of its ancient history as the site of an Iron Age hill-fort, and its visibility, there is no public access to the top. Its modern reputation was ensured when on St Valentine’s Day 1945 a farm labourer from this sleepy area was killed on the hill in what became known as The Pitchfork Murder. The morning after we’d been up the tower, a programme came on the radio in which comedian Steve Punt investigated this very event. Even though the case was investigated by one of the top detectives of the day, the murder remains unsolved. Fabian of the Yard encountered a wall of silence when he arrived to interview locals. With no obvious suspect or motive suspicion fell first on Italian prisoners of war incarcerated in the area, then on witchcraft. Was this some sort of magic rite? Punt followed up leads in the local newspapers held at the Shakespeare Centre Library and Archive (quite right too), and interviewed local historian Betty Smith as well as an expert on murder who pointed out that although people are quick to blame external factors such as foreigners or witchcraft, most murders are committed by people well known to the victim. 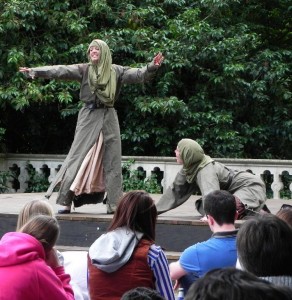 And so it is with Shakespeare, in particular the play that deals most with the twin subjects of murder and witchcraft, Macbeth. Although Macbeth commits the murder of Duncan, is he really responsible or should the blame be laid at the feet of the Weird Sisters, or even Lady Macbeth? On the same day as the radio programme about events at Meon Hill we attended TitianRep’s production of Macbeth being performed at the Dell in Stratford.

As we walked down to these leafy gardens in the afternoon sunshine, I wondered how the actors would manage to conjure up the Weird Sisters, the ghost of the murdered Banquo and Lady Macbeth’s night-time sleepwalking. 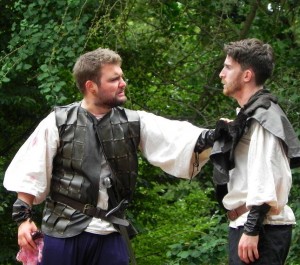 Creating the atmosphere is a real challenge even with lighting, sound effects and the four walls of the auditorium ensuring the audience don’t have anything else to look at. But the eight actors did a terrific job, getting the most out of the minimum of props, a carefully-cut text and much intelligent doubling. Their concentration, together with Shakespeare’s words, created a sense of evil and darkness, ensuring that the audience were drawn in. It was noticeable that we all fell silent during  Lady Macbeth’s sleepwalking and the scene in which Macduff hears of the murder of his family.

We can be pretty sure that many people who attended the play in Shakespeare’s lifetime would have believed in the hauntings and spells conjured up in the play. A new book by Tracy Borman, Witches: A Tale of Sorcery, Scandal and Seduction, examines the case of Margaret and Philippa Flowers who were executed for witchcraft in Lincoln in 1619. The writer of the Guardian’s review of the book, David Wootton, explains that although witchcraft has been widely believed in, it is difficult if not impossible to prove that witches ever really existed. One theory is that witchcraft exists to explain inexplicable or uncomfortable events. Shakespeare is, as usual, ambiguous. The weird sisters cast their spells, but both Macbeth and his Lady are capable of plotting murder 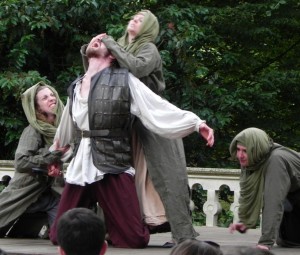 without their predictions. Where does the dagger, that appears to Macbeth as he prepared to murder Duncan, come from?
Art thou not, fatal vision, sensible
To feeling, as to sight? Or art thou but
A dagger of the mind, a false creation,
Proceeding from the heat-oppressed brain?…
Mine eyes are made the fools o’th’other senses,
Or else worth all the rest: I see thee still,
…There’s no such thing.
It is the bloody business which informs
Thus to mine eyes.

And the witches’ predictions, that sound so impossible, come true in the most direct of ways. Want to make a forest move? Just cut down some branches and walk with them!

Even if we don’t take the supernatural very seriously these days there is no shortage of people feeding our interest in it. Stratford has its own museum of the supernatural, The Creaky Cauldron and there are no fewer than three Ghost Walks of Stratford on offer to evening visitors: there’s the one offered by Stratford Town Walks, another by The Falstaff Experience and that organised by The Creaky Cauldron itself. 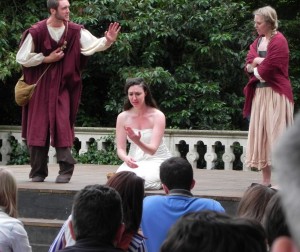 Even the RSC have caught the bug, with a page on their website devoted to paranormal events in their theatres and a call for people to send in their own stories.

Finally on a more serious note, for those in Stratford-upon-Avon the Shakespeare Institute Library have just announced an exhibition displaying some of their holdings on the subject of witchcraft. Among other things it features material from two productions of Macbeth, that at the Open Air Theatre in Regent’s Park in 1991 and Shakespeare’s Globe’s in 2001. Go along and see how some modern productions have interpreted the spooky moments in Shakespeare’s most haunted play.