Richard II at the RSC 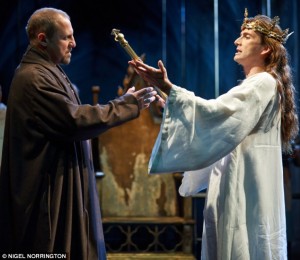 The RSC’s Richard II is onstage at last, and I’ve got to one of the performances. I’ve seen quite a few past productions of the play onstage, some extremely memorable. Like Hamlet, it’s often judged by its central performance, but both plays need a really strong company to be successful.  In Hamlet Doran fielded the strongest RSC team for some years, and in Richard II  he’s done it again.

David Tennant had his greatest RSC success with Hamlet, but Richard II is a different kettle of fish. Richard is more interested in himself than anyone else, and can be hard to like. This makes him a challenge for any actor, and I was interested to see how David Tennant, an actor who thrives on communicating with the audience, would play the role. 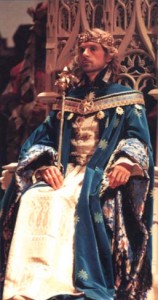 I’ve seen many notable productions with strong central performances. To begin with Tennant often reminded me of Jeremy Irons in 1986, both glamorous, physically alike and both exhibiting boredom when faced with quarrelling nobles. Michael Kitchen was a down to earth Bolingbroke who seemed to inhabit a different England from the gorgeously illuminated medieval book of hours that Irons lived in. But whereas Irons never managed to escape the limitations of this setting Tennant brought his usual nervous energy to bear throughout the king’s decline and fall. 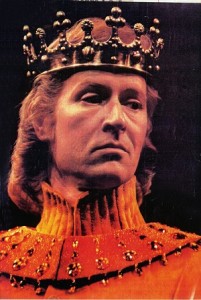 Alan Howard’s golden Richard, in 1980, was described by Michael Billington as “peacock-proud”, with “star presence”, making his decline painfully humiliating. I remember it as a richly-spoken production with David Suchet as a striking, emotional Bolingbroke.

The difference in style between Richard and Bolingbroke was also apparent in The Other Place production in 2000, in which Sam West’s intellectual, self-aware king was contrasted with David Troughton’s bullish, angry Bolingbroke. The production presented different versions of modern England, with football chants played as the audience assembled and a pile of freshly-dug earth on the stage floor. For me one of the most striking images of the play was Troughton, when banished, picking up a handful of earth, dropping it only when he arrived back in England. 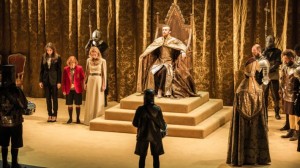 Another memorable production, also staged in a small auditorium, was that at Bristol’s Tobacco Factory in 2011. John Heffernan’s King was immature rather than bad, a victim who did not deserve his tragic end. Heffernan is currently playing Edward II in Christopher Marlowe’s play at the National Theatre. The King’s desperate need for personal relationships drives Marlowe’s play, and this eccentric but enjoyable production moves between the period of the play and today, and between the onstage and the backstage world. This link is to a post that compares it with the RSC’s Richard II, and this link is to a interview about the play with the director and Heffernan.

The current production is full of ritual, formality and sophistication. The seemingly-simple,  elegant set features projected backdrops, a smoothly-gliding stage bridge and an understage setting for Richard’s dungeon. The religious imagery is insistent and appropriate. Three sopranos sing sumptuous heavenly music written by Paul Englishby. The projections place us in English cathedrals, and Tennant’s costumes and long hair are reminiscent of paintings of Christ. The poetry of the play is beautifully spoken by a cast including experienced Shakespeareans Michael Pennington, Jane Lapotaire and Oliver Ford-Davies, who all make it look easy. David Tennant isn’t afraid of being unlikeable, particularly at the start, though here and there I would have liked him to resist the temptation to make the audience laugh.

As the first production in the six-year cycle of all Shakespeare’s plays announced by Doran when he took over as Artistic Director of the RSC, Richard II lays down a marker. Above all, it illustrates his determination to strive for quality above quantity, and bodes well for the next few years.

If you’d like to find out more about this striking production, here are some links:

Wyver’s thoughts about Richard II, and ten things he likes about it.

An article from 2011 by Michael Dobson about Richard II, calling it “A play for today”

6 Responses to Richard II at the RSC