In memory of Reg Foakes 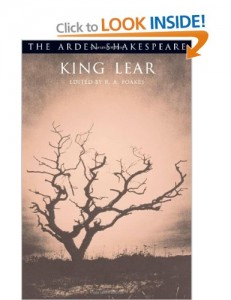 Arden 3 edition of King Lear, edited by R A Foakes

I’m sitting here with my Arden Edition of King Lear, probably the most authoritative edition of the play ever published. Its editor, Reg Foakes (R A Foakes on the title page) died over Christmas at his home in Stratford-upon-Avon aged 90.

Over the next few weeks many of Reg’s professional academic colleagues will be sure to write about his huge contribution to Shakespeare studies. Just one of his lasting scholarly achievements is his edition of Henslowe’s Diary, first published in 1961, reprinted in 2002 and still the standard work on the subject, helping to uncover much about theatre in Shakespeare’s time including the controversial topic, collaborative writing. He was a member of the Advisory Board for the ongoing Henslowe-Alleyn Digitisation Project and contributed several essays to the website, listed here.

I knew Reg for many years, and although we often discussed Shakespeare, that isn’t what makes me so sad to hear of his death. He was a man of great modesty: it doesn’t surprise me that his Wikepedia entry is brief and out of date, nor that Google fails to find a single picture of him. 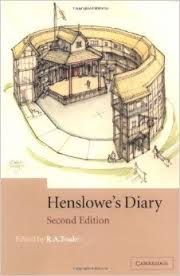 The second edition of Henslowe’s Diary, edited by R A Foakes

We met while I was working at the Shakespeare Centre Library in Stratford. Although he was a highly-respected academic his unassuming personality and willingness to discuss his work made him popular as a reader. I remember discussing the size and orientation of the restored Globe (Reg’s opinion was that it was too big). While he was working on his book Hamlet versus Lear we discussed the relative merits of the two plays (King Lear, in Reg’s opinion, is by far the better play). But most of my memories relate to the Arden edition of King Lear which he prepared over several years. He researched part of the text and sourced many of the production photographs for its introduction using the Library’s performance collections. One of the difficulties with the play is that the two editions, the 1608 Quarto and the 1623 Folio, are very different from each other. Reg wanted to signify this by using different typefaces for each text so it would be immediately obvious to the reader which was which. Perhaps inevitably he lost this argument, and in the Arden edition the texts are signified by a subtle Q or F that does not detract from the elegance of the page.

Reg’s edition of King Lear came out in 1997, the year after his second wife, Mary, died. When I joined the staff at the Shakespeare Centre Library in 1979 she had already been working there for six years. She became my dearest friend. We shared an office and the day to day running of the Library for the next fourteen years, until she married Reg and joined him in California. Mary had a Shakespeare quote for every occasion so their collaboration on a book of Shakespeare quotations, categorised by subject, was a happy one after they married.

Mary was the sweetest-natured person I’ve ever known, so it seemed particularly cruel that some years before she married Reg she developed a mental illness. It was only after Mary’s death that he realised the severity of her illness, which she had managed to conceal from him. It must have been terrible for him to have to continue thinking about his edition of King Lear after her death.  He dedicated the book “For my beloved Mary” and quoted Lear’s words after the death of Cordelia:
Thou’lt come no more,
Never, never, never, never, never.

His first wife, Barbara, had also died in tragic circumstances and in the last years of his life he wrote several books of poetry and a memoir, Imagined Places, in which he talked frankly about the loss of both women, and about the importance to him of his four children and their families. The final sentence of the memoir deliberately echoes the end of King Lear: ” Now I see that achievement, the goal of youth, is not what matters most in life, but rather love, generosity, acceptance, and the ability to endure with patience suffering that can not be avoided.”

And his last collection, Just Watch Your Step contains this sensitive poem, Loving.
It must be your presence enriching the path,
Moving beside me as in a vital dream,
Speaking in your unforgettable voice
So many ways of loving. Time bends
Around us in the ever-changing light,
And we always keep our fingers intertwined
As long as I can remember, ever since first
We followed the unmapped trail that brought us
Through grateful years to unexpected places,
Crowded city streets, woods coming into leaf,
Quiet paths of autumn, at the sea’s verge,
Dodging the surf on exhilarating beaches,
Or at home, wherever it was we found ourselves,
Over and over while the days held us together,
Always as if for the first time and for ever;
So though your ashes are buried you remain,
My shadowy partner until I reach the end,
Unafraid of whatever lies in wait, having
Your image to grace all possible exits.

5 Responses to In memory of Reg Foakes