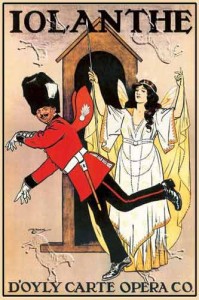 WS Gilbert is universally known for his partnership with Sullivan, creating the operas staged at the Savoy Theatre in London by the D’Oyly Carte Opera Company. G&S’s light, mostly comic operas such as The Mikado, The Pirates of Penzance, Iolanthe and many others have been performed over the past 130 years or so to the delight of audiences around the world.

But Gilbert only got together with Sullivan in the mid 1870s. Both men already had flourishing careers, Sullivan as a composer and Gilbert as a successful playwright. A lot of information about him is to be found on the W S Gilbert Society website.

I’ve only recently become aware of  Gilbert’s Hamlet spoof Rosencrantz and Guildenstern, which he wrote in 1874 just before the partnership really began. Now there is a chance to see this rarity performed at the Shakespeare Institute on Sunday 16 February at 4pm. RSC actors past and present are going to be giving a rehearsed reading of the play, as well as other delights, assisted by the Shakespeare Institute Players. 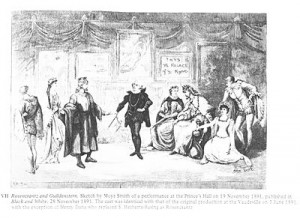 As is apparent in the G&S operas, Gilbert had a tremendous love of wordplay and comedy, which he exploits in this delightfully funny burlesque. In one of the most famous scenes in Shakespeare’s Hamlet, the prince gives his advice to the players who come to perform in Elsinore, and in Rosencrantz and Guildenstern Gilbert can’t resist giving his Hamlet a similar speech about successful comic acting technique: “I hold that there is no such antick fellow as your bombastical hero who doth so earnestly spout forth his folly as to make his hearers believe that he is unconscious of all incongruity.”  Most actors and comedians today would agree with Gilbert’s analysis.

Rosencrantz and Guildenstern was considered for performance by Henry Irving, the leading Shakespearean actor of the day, but the play wasn’t actually performed until 1891. Its first performance was as a benefit matinee and a successful production followed, as did a production in New York City. WS Gilbert himself performed Claudius in several benefits, and the play has often been put on in support of charity.

This is the case, too, with the performance on 16 February. The serious purpose behind it is the aim to help raise money to help Jami Rogers, PhD (from the Shakespeare Institute), a US citizen, in her legal battle to remain in the UK. Her application was refused at the end of 2013 and she is now launching an appeal. The benefit performance will help demonstrate support for her as well as raising much needed funds. Admission to the event has been pitched at the low level of £10, for which, remember, you will have the pleasure of watching actors of the calibre of Edward Bennett, Katy Stephens and Claire Price. Even if you aren’t able to be there, please give whatever you can to help Jami’s appeal. Details of the performance, and of how to make a donation, are here.

It promises to be a delightful Sunday-afternoon treat, so I hope people will come along. Full details are on the Gilbert Benefit page of this blog.