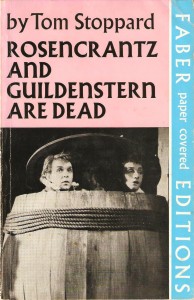 The best-known play based on Shakespeare’s play Hamlet is Tom Stoppard’s brilliant 1966 play Rosencrantz and Guildenstern are Dead. It follows the plot of Hamlet from the  point of view of the pair of hapless and confused courtiers, owing much to Samuel Becket’s Waiting for Godot and his characters Vladimir and Estragon. Dating from the exuberant 1960s it has its own existence independent of both the plays that inspired it. With the recurrent idea that every exit is an entrance somewhere else, Stoppard gives us the conversations between Rosencrantz and Guildenstern after they’ve first met Claudius and Hamlet, where they reveal themselves to be completely out of their depth. In Shakespeare’s play there’s little sympathy for the pair, but Stoppard’s characters are little people who have no control over the situation they find themselves in. 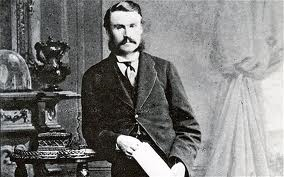 W S Gilbert’s spoof Rosencrantz and Guildenstern is a much frothier story containing many of the elements of Victorian comic romance with a hint of melodrama. It’s based much more loosely on Hamlet, without the murders. Ophelia, betrothed to Hamlet, meets Rosencrantz and the pair fall in love. In order to get Hamlet out of the way of their love, Rosencrantz, Guildenstern and Ophelia plan to trick him into performing a play written years before by Claudius which was so disastrous that even mentioning it is banned. Hamlet is held responsible for the performance, but execution is averted by the alternative suggestion that he should be exiled to “Engle-land” instead. At one stage, Hamlet tries to deliver the “To be or not to be” soliloquy, constantly interrupted by Rosencrantz and Guildenstern. Exasperated, he exclaims “Gentlemen,/ It must be patent to the merest dunce/ Three persons can’t soliloquize at once!” The play was written in 1874, staged in 1891, and has since received a number of performances.

Last Sunday’s event was a great opportunity to hear a rehearsed reading of this rarely-performed Hamlet spoof, but for me the most interesting of the offerings was a rehearsed reading of an even rarer play that had been performed only once before in Yasumi Prisoner of War Camp, Japan, on 3 June 1944. The play, entitled Shamlet, was written by David Piper, imprisoned in the PoW camp from 1942-1945. The play typescript, and Piper’s notebook, are both kept at the National Army Museum. PoW camps were usually grim places, but Piper records that the prisoners held monthly concerts. These are the notes Piper wrote after the performance:
We put on “Shamlet” on Saturday, side-splitting success. Stage is 4 platforms in the open outside the hospital, and some curtains; costumes odds and ends, mostly odds. I was Laertes with a white D.J (off-white at least), a pair of Blue Nip trousers, bare feet and a huge sunflower as a buttonhole. Brian France who is a gaunt cadaverous man known as “Golgotha”, was Hamlet in a shirt and a pair of long woollen issue underpants. Ophelia in bathing trunks and bogus bosom etc. It’s good fun while it lasts, but afterwards it makes you so homesick, that everything bears strange associations, and turn where you may, all that you see makes you sick with nostalgia…

The play has a chorus figure, the Commentator. This is part of his introduction:
We have chosen to present you – Hamlet. Not without some difficulty, of course – William takes 31/2 hours over it, deploying X characters (not including alarms and excursions) – 31/2 hours to disentangle the very simple case of our hero, who, however, complicates the whole thing by going all introspective (broody). So we had to change it a bit, & I hope you’ll agree it peps the whole thing up…

The Commentator is joined by the Little Man, who is ignorant of Shakespeare’s play. In the play Hamlet turns out to be a keen and robust golfer (Polonius is killed with a golf club). Piper himself played Laertes, a coward who faints at the sight of blood.

The home-sickness of the prisoners is apparent in the script, with its golfing terms, mentions of popular film stars such as Mae West and the longing for female company. In this play too Hamlet is constantly interrupted while trying to soliloquize, here the key line is “Frailty, thy name is woman”:
Hamlet: O woman, thy name is… thy name is…
Commentator: Mary Anne? Hypatia? Jane?
Hamlet: Shut up! You’ve got me all boxed up.. ah!
Woman, thy name is frailty.
Commentator: Nope. Haven’t met her.
Little Man: But what is woman?
Commentator: Well, well. Where’ve you been all these years? Woman? Well, now: it’s hard to explain..  Like you and me, but different (makes appropriate gesture). See?
Little Man. O yes. I remember now.. a long, long time ago.  Nice. 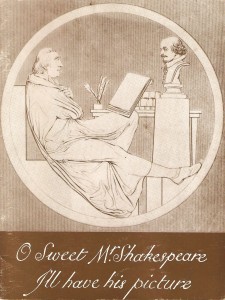 After being freed from the PoW camp David Piper went on to  have a distinguished career not as a playwright or actor, but as an art historian, who became in turn Director of the National Portrait Gallery, the Ashmolean Museum in Oxford and the Fitzwilliam Museum in Cambridge.  In 1964 while at the NPG, he wrote O Sweet Mr Shakespeare! I’ll have his picture“, a highly-illustrated popular 40-page booklet about images of Shakespeare.  His play, though, remained unknown and unperformed until now.