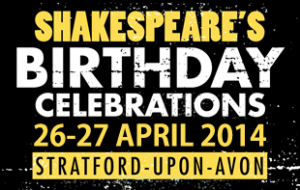 With less than a month to go, celebrations for the 450th anniversary of Shakespeare’s birth are getting into gear, and will continue right into the summer. A special website pulls together all the activities going on in Stratford over the weekend of 26/27 April, the nearest weekend to the actual day, 23 April. After a slightly low-key couple of years, several of the traditional elements are re-appearing including the use of New Place Garden for the procession to assemble and the return of the great marquee for the luncheon which will feature speeches from, among others, novelist Hilary Mantel and the retiring head of the National Theatre, Sir Nicholas Hytner. Quoting from the site,
Crowds will be lining the streets of this Elizabethan market town to see actors, foreign diplomats and civic dignitaries lead the 1,000-strong grand Birthday Procession from 10:30am on Saturday 26 April. They will be followed by a lively community pageant, street entertainers and the Stratford Morris Men.  Local people and visitors can join in too and walk with the pageant through the town to lay flowers on Shakespeare’s grave in the Holy Trinity Church.

But even before the birthday several big academic events are taking place. After several days celebrating Othello, on 10 April the British Institute of Florence is organising the 6th edition of the Shakespeare Graduate Conference on the theme  Forms of Nationhood, in collaboration with the Italian Association of Shakespeare and Early Modern Studies and the University of Florence

At the same time, from 10-12 April the annual meeting of the Shakespeare Association of America, a great gathering of Shakespearians not just from North America, takes place in St Louis. Here’s the program.

Not an academic conference, but for light relief you might like to read about another event, or even to enter it. The St Paul Pioneer Press is holding a contest to celebrate Shakespeare’s 450th birthday. This will take place in April and it’s the 45-second Shakespeare Film Festival Contest. There’s a video here to explain   and here is the website where you can enter and watch the videos.

After the birthday itself, conferences continue. Not actually Shakespeare-focused, the Malone Society conference is sure to attract Shakespeare scholars. It will take place on 17 May at Oxford University. The Society was established in 1906 for the  unfashionable purpose of producing accurate copies of the best editions of early plays. It’s rather wonderful that the Society is now finding that having spent years publishing and discussing the most obscure of texts its work is becoming mainstream as collaboration becomes more and more popular as a topic. This year they’re going to be looking at the anonymous play The Fair Maid of the Exchange.

On 3 June there will be a one-day symposium at De Montfort University, in Leicester, entitled Reforming Shakespeare: 1593 and After. This will look at “the kinds of alteration that have occurred  to Shakespeare’s writing as it has made its journey from author to readers and playgoers. ‘Reforming’ may take the sense of being given new shape as authorial or non-authorial adaptation, rewriting, borrowing or allusion and arguments about any of these processes… ‘Reforming’ can also suggest correction and improvement, including censorship, editing, and tidying up of text to make it conform to new conditions of reception.” There’s more on the flyer.

From 5-7 June attention shifts back to Stratford-upon-Avon for the Annual BritGrad conference taking place at the Shakespeare Institute. This covers many areas of Shakespeare and Renaissance studies. There’s lots more information here.

Then the British Shakespeare Association Conference will be taking place at the University of Stirling from 3-6 July 2014. Full details haven’t been released yet, but the conference will centre on questions of authority in Shakespeare. Here’s the website.

NEWS!
Since I first sent out this post I’ve been contacted by the Victoria and Albert Museum to remind me of their very extensive 450 celebrations. The information that follows gives details, and some links. Do enjoy these great events!

Our festivities will run throughout April – May, with special emphasis on the Festival Fortnight, 21 April – 4 May. The programme will include a huge range of talks, performances, screenings, tours, workshops, special activities and themed events for all ages. Most activities are free of charge. A full programme can be found here:  some highlights include:Conducting ShakespeareScenes from Shakespeare, with a twist. The programme will be ‘conducted’ in direct response to the emotional responses of volunteers from the audience (detected by a series of bio-sensors monitoring brainwaves, heart-rate, perspiration and muscle tension). Propeller Professional Development WorkshopsSet design, 3 May:  Sound, 28 April: Performance, 28 April: The Bookshop Band2 May, 19.30 and 20.45Folk trio perform new songs inspired by the BardIn addition, the V&A has produced a special Shakespeare Trail map, showing a journey through the Museum, visiting a range of objects related to Shakespeare. The exhibition Shakespeare: Greatest Living Playwright is also on display in the Theatre and Performance galleries until 28 September 2014.

This entry was posted in Legacy and tagged anniversary, Birthday, Conferences, Shakespeare 450. Bookmark the permalink.

2 Responses to Celebrating Shakespeare at 450 – updated