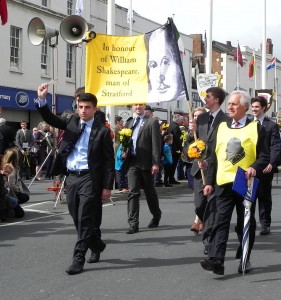 The parading of “Shakespeare’s Quill” in the 2014 Birthday Procession

As I write, we’re reaching the end of the celebrations for Shakespeare’s 450th anniversary. It’s an extraordinary record, and academic Jonathan Bate has recently written about Shakespeare’s status as universal cultural icon.

Bate suggests that although the 1964 celebrations were large, they were not as all-pervading as the 450 anniversary is. In spite of all the hullaballoo this year, I’m still not sure he’s right. In 1964 the SBT issued a handsomely-illustrated 56 page pamphlet called Celebrating Shakespeare including photos of many events and commemorative souvenirs, but didn’t attempt to be anything like inclusive. The Shakespeare Birthplace Trust welcomed material documenting celebrations from around the world. The many that were received were carefully filed away in boxes and stored in strong rooms: maybe the difference between now and 50 years ago is not that more happens, but that we know more about it. 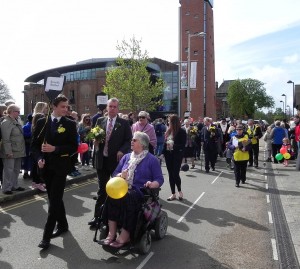 Parading past the Royal Shakespeare Theatre, 2014

I can’t resist one example of a tribute to Shakespeare which children’s writer Michael Rosen delivered on Radio 4’s PM programme on the 22nd. Rosen has a bit of a dig at current education policy, and it’s a subject that Jonathan Bate also covers. In his position on an advisory body, he has resisted the proposal that all 16-year olds should have to study not one but two Shakespeare plays: “It cannot be in Shakespeare’s interest for teenagers to associate him with compulsion” .

Bate salutes changes in attitude over the last 50 years that mean academics and theatre professionals no longer see themselves in opposition.  “Much of the best modern scholarship has focused on the practicalities of performance in the Elizabethan and Jacobean theatre, while the history of Shakespeare on stage and screen has become a thriving sub-discipline in its own right.” Theatre education departments are getting teachers and pupils to bring the plays to life by “speaking the lines aloud and fitting the word to the action.” 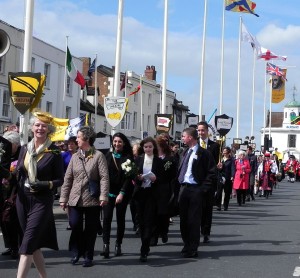 Part of the 2014 Birthday Procession

He suggests, “The crucial next step will be the adaptation of Shakespeare to the digitised classroom of the future. By the time the 500th anniversary is celebrated in 2064, textbooks will have been replaced by some version of the tablet computer” and he cites a project ” in which the plays can be simultaneously read and seen, with all sorts of contextual and explanatory information reachable at a click. ” Food for thought indeed.

In 2014 questions about how to celebrate proliferate. The new exhibition at Shakespeare’s Birthplace, Famous Beyond Words, focuses on how Shakespeare has for centuries inspired other artworks such as paintings as well as the celebrations themselves. On display is a perfect celebratory object, the 1623 First Folio: its publication was the first big memorial to its author’s achievement, combining Shakespeare’s work itself with poems and essays by people who knew him. 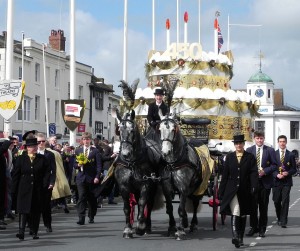 An unconventional addition for 2014: a 450th birthday cake

But the exhibition also begs the question “What are we celebrating?”  Somehow we seem to be celebrating Shakespeare’s fame, rather than the work or the circumstances that help to explain it. But maybe that’s OK, particularly for a birthday party.

The Birthday celebrations in Stratford still follow the pattern established in the early nineteenth century with parades, banners, dinners, speeches and fireworks. The performance of one of his plays on the day of his birth was a late addition, first occurring in 1879 when the Shakespeare Memorial Theatre was opened with Much Ado About Nothing. 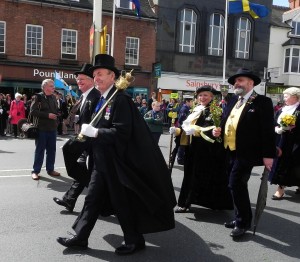 Macebearers and Stratford’s Mayor in the procession, 2014

It remains both a national (nowadays international) event and a locally-organised one, the procession on a very human scale as people walk through the streets Shakespeare knew, giving an opportunity for those who already care for  Shakespeare to show their respect. It’s also an opportunity for those who make their livings through Shakespeare, whether they be academics, shopkeepers or actors, to acknowledge their gratitude. As Bate says, “almost all countries in the world pay homage to William Shakespeare. His works are our most enduring cultural export.”