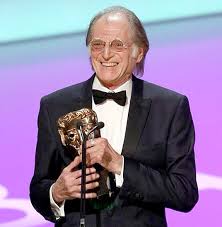 It’s truly wonderful news that actor David Bradley has won a BAFTA after a forty-year career that has spanned theatre, TV and film. Not surprisingly, the award he won is Best Supporting Actor in the hit TV drama Broadchurch. David has very often played what are usually called supporting roles, brilliantly.

In recent years David has been best-known as the sinister caretaker at Hogwarts,  Mr Filch, in the Harry Potter films, but in between he’s continued to appear onstage, for instance at the National Theatre where he played the title role in Shakespeare’s Henry IV plays with fellow Harry Potter actor Michael Gambon, a role for which he was nominated for an Olivier Award in 2006. Other recent theatre credits include Pinter’s No Man’s Land (for which he was again nominated for an Olivier Award) and Beckett’s Endgame. This link is to an interview he gave in 2011 where he describes  playing “people on the edge, or outsiders” as “interesting territory”.

Online biographies tend to focus on screen work but much of his best work has been in Shakespeare. Writing for a company of skilled actors, Shakespeare wrote roles for all of them which I don’t like to call “supporting” because they are rewarding in their own right and sometimes have their own existence outside of the main strand of the play. Many of these are parts which David made his own, but rather than being typecast the range of roles he has successfully taken on is amazing. 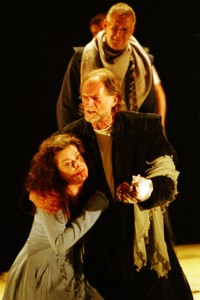 These are some of the roles he’s played for the RSC: in Shakespeare as Sir Andrew Aguecheek in Twelfth Night, the title roles in Cymbeline and Titus Andronicus, Gloucester in King Lear, Polonius in Hamlet, Shallow in Henry IV Part 2, Dr Caius in The Merry Wives of Windsor and the first (which I was lucky enough to see when it was performed in London), Antonio in The Merchant of Venice. In non-Shakespeare he’s played Subtle in The Alchemist, Mephistopheles in Doctor Faustus, and Fistula in Vaclav Havel’s play Temptation. It shows an extraordinary range: from the silliness of Aguecheek to the violent tragedy of Titus Andronicus. He has a wonderful talent for comedy which isn’t often seen in his screen work. And these are only a small selection: he features over 100 times in the RSC Performance Database. And this doesn’t include his equally distinguished work at the National Theatre: the Olivier award he won was for his Fool to Brian Cox’s King Lear. In a previous blog I talked about this performance.  He’s also appeared in the a translation of Racine’s classical drama Phedre and Chekhov’s Three Sisters and Uncle Vanya. 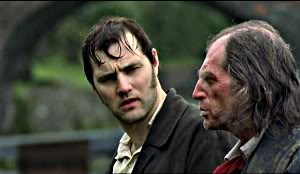 David Morrissey and David Bradley in Our Mutual Friend

On TV I’ve particularly enjoyed seeing him in Our Friends in the North, in the serialisation of Dickens’ novel Our Mutual Friend, and just last year he appeared as the first Doctor Who, William Hartnoll in a drama about his life. He has of course also appeared in an episode of Doctor Who.

Here’s a link to his agent’s site which includes a complete run-down of his extraordinary career. 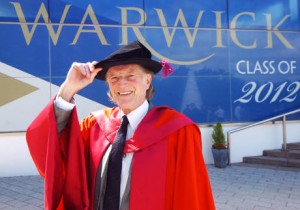 David Bradley receiving his Doctorate from the University of Warwick, 2012

But those of us living in the Stratford area have another reason for being thrilled about his success. David has lived locally for more than twenty years (though often absent because of work), and has generously given support to a number of local organisations. Without a theatrical background David first acted as an amateur in his home town of York, and he retains the link with amateur acting by being President of Stratford’s Second Thoughts drama group. He is a patron of the Shakespeare Hospice, in Stratford-upon-Avon, and  in 2010-2011 he was President of the Stratford Shakespeare Club. In 2012 he was granted an honorary doctorate by the University of Warwick.  Here’s a link to a page where you can hear a podcast of David Bradley being interviewed at the time of this award.

I can’t be alone in hoping we’ll see him back onstage performing some Shakespeare soon!