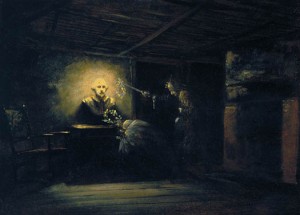 Thomas Nast’s study for The Immortal Light of Genius, at the Folger Shakespeare Library

Browsing Julia Thomas’s book Shakespeare’s Shrine recently, I came across a reference to a painting created at the height of Shakespeare worship. By Thomas Nast, it was entitled “The Immortal Light of Genius”, commissioned by the great actor Henry Irving in the 1890s. Julia Thomas’s description reads “Set in the birthroom, it shows the bust of Shakespeare radiating with a supernatural glow as the figures of comedy and tragedy present laurel wreaths. The genius will never be extinguished: it lives on in the light that emanates from the bust and shines on the bare walls and floorboards of the birthplace”. For more information she cites William L Pressly’s 1993 Catalogue of Paintings in the Folger Shakespeare Library.

Who, I wondered, was Thomas Nast, and why did Irving commission the painting from him? Why is the subject treated is such a mysterious way? I checked the Folger’s website and Pressley’s book for the full story. Here’s the catalogue entry. 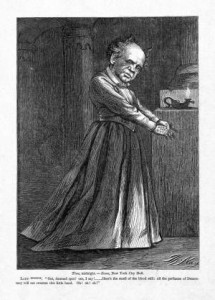 Thomas Nast was born in Germany in 1840 but as a child his family moved to New York. His talent as an artist was recognised early and his political cartoons became a popular feature in Harper’s Weekly from 1862. He was a great admirer of Shakespeare. According to a biography site, ” Nast introduced the donkey to typify the Democratic party, the elephant to typify the Republican party, and the tiger to typify Tammany Hall, and introduced into American cartoons the practice of modernizing scenes from Shakespeare for a political purpose.” In one example from 1868 the Democratic presidential nominee Horatio Seymour is shown as Lady Macbeth guiltily trying to wash the blood from her hands. Seymour had been responsible for a violent conflict during the Civil War. Princeton University’s Digital Library contains hundreds of cartoons by Nast.

So how did it come about that Nast painted this religiously devotional picture of Shakespeare’s Birthplace? Pressly notes “A pilgrimage to Stratford-upon-Avon on a trip to Europe in 1878 produced an image published in Harper’s Weekly showing the ghost of the Bard himself haunting the artist’s imagination”. This visit to Shakespeare’s Birthplace clearly had a profound effect on Nast. He travelled in Europe in 1894 in search of work and had become friendly with Henry Irving who commissioned the work. In 1895 he completed a preliminary sketch followed by an oil study, both of which were acquired by Mr Folger in 1906 and 1908.

The actual painting was completed on 23 April 1896 and presented to Henry Irving. But rather oddly, Irving determined to present it to the Arthur Winter Memorial Library of the Staten Island Academy on the occasion of its dedication on 15 and 16 June. This may be explained by the fact that the President of the Trustees was William Winter, drama critic of the New York Tribune and author of a book on Irving. Pressly explains “Nast, however, was unhappy with the disposition of his painting, feeling Irving should have it rather than the Academy. The painting was returned to him almost immediately after the dedication, but Irving must have persuaded his friend to acquiesce. After slight alterations, Nast sent the picture back to the academy” Pressly notes that the painting “appears to have been destroyed in a fire”.

Nast subsequently painted a second copy of the painting which was presented by his widow after his death, in 1903 (Nast died in 1902), to the Shakespeare Memorial in Stratford-upon-Avon. Pressly notes “The present whereabouts of both pictures are not known”.  Another reference comments that it does not appear in the 1970 Catalogue of Paintings held by the RSC, and it is suggested it was destroyed in the first World War. But I checked, and it appears in the catalogues date 1956.   “The Immortal Light of Genius”, reads the entry. “A room in Shakespeare’s Birthplace. A bust of Shakespeare, illuminated by a supernatural radiance, is approached by ghostly figures of Tragedy and Comedy in attitudes of reverence. Oil on canvas. 28″ x 41”. So something happened to this painting between 1956 and 1970. 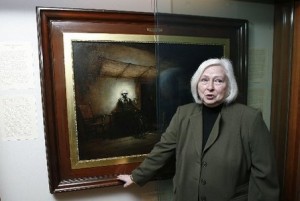 The plot thickens again with this article dating from 2008, reporting that the painting had been donated to the Library at Morristown New Jersey, where Nast lived for most of his adult life. It had been purchased at a “country auction” in 1976 and spent thirty-five years in a cupboard. It had required extensive restoration work before being put on public display. The assumption must be that this is the original painting which was not after all destroyed by fire. Although the image isn’t clear, it seems to differ from the Folger’s study. But is it just possible that it’s the Stratford painting that disappeared in the 1960s?  Either way it’s great that a rare painting by a renowned American artist has at last found its way to a place where it is valued: the Morristown Library contains much of Nast’s work and is the home of the Thomas Nast Society.

Here again is Pressly’s description of the Folger’s oil study:” Nast introduced the figures of Tragedy and Comedy paying homage to the Bard as they offer laurel wreaths to his statue. It is a conception that could easily slip into the ridiculous, but the dramatic lighting helps it bridge the realms of reality and fantasy. An intense yellow light, without a natural source, radiates from the dome of Shakespeare’s head, firing the wall behind him and sending a few flickering highlights throughout the darkened room… The viewer, like the statue, witnesses the scene as in a trance. It is in the mind’s eye that the action takes place.”

His treatment of the subject may now deeply unfashionable, but it’s a wonderful example of the way in which Shakespeare-worship linked cultures on both sides of the Atlantic.