Shakespeare in Love – the play 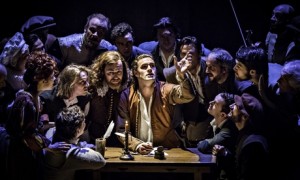 A scene from the stage version of Shakespeare In Love

This evening, 23 July, is the official opening of the new London West End play Shakespeare in Love, Lee Hall’s new version of the much-loved 1998 film of the same name. Rumours have been circulating about this play ever since it began in preview a couple of weeks ago and the Daily Telegraph and a couple of others have got their reviews in already. The reviews are great – the Telegraph called it “the best British comedy since One Man, Two Guvnors and deserves equal success” and gave it five stars. Here’s the trailer. 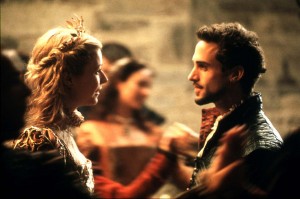 A still from the film Shakespeare In Love, with Gwyneth Paltrow and Joseph Fiennes

Shakespeare in Love is one of my all-time favourite films, with a great cast and brilliant screenplay by Tom Stoppard, one of the cleverest writers around. This article from the New York Times explains how a few years ago Tom Stoppard was persuaded to rewrite the film as a play, that was subsequently scrapped, and looks at how they approached the adaptation of such a successful movie.

Despite the departure of the man who wrote the screenplay, the stage version remains a faithful adaptation: About 90 percent of the film script — full of witty banter and words of love — has been retained, Mr. Hall said. (The dialogue-heavy play is a relatively rare instance of a recent movie adaptation that isn’t a musical.) But in other ways the play feels a world apart from the film. Not only are there 30 minutes of added dialogue, lifted from Shakespeare,  written by Mr. Hall (a Tony winner for the book for “Billy Elliot the Musical,” another screen-to-stage work), but also an abundance of imaginative staging choices by the director, Declan Donnellan.

Lee Hall’s adaptation was created by closely working with Declan Donnellan and  designer Nick Ormerod, the great Cheek by Jowl partnership. The original film was very much about the business of getting a play into the theatre and they’ve carried this idea even further. Here’s a link to a video about designing the play, and another to an interview with the director about staging it.

It’s probably a sign of confidence that they’re opening the play in the West End without a provincial run first, and with a cast of twenty-eight, an almost unheard-of number in recent years. The cast is led by Lucy Briggs-Owen as Viola De Lesseps and Tom Bateman as Shakespeare. Anna Carteret plays Queen Elizabeth. Taking a cue from the film there is even a dog called Spot.

Booking is now open until 25 October. I’ve got my tickets already but a word of warning: if you want to buy tickets, get them from the official Delfont Mackintosh site rather than the very expensive ticket agency.

And if, like me, you’re a great fan of the film, here’s a link to the information about it on the Internet Movie Database. Whatever the stage play is like, there will always be the film to enjoy.