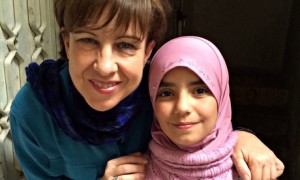 Lyse Doucet with Daad, one of the children she followed

Lyse Doucet’s recent BBC2 documentary, Children of Syria made gruelling viewing. She had spent six months following several displaced children in Syria. The children spoke with dignity and maturity beyond their years: all were aware that their childhoods have been lost, their lives changed forever by the country’s civil war. This was the Guardian’s review of the programme.

Maybe the timing of the documentary, just a week before the commemoration of the outbreak of WW1, was deliberate: close enough to provide food for thought without detracting from the centenary itself. When they scheduled it though they couldn’t have known how the conflict in Gaza would intensify, with United Nations-run schools being bombed, greatly increasing the number of civilian casualties especially children.

Children are always casualties of war.  In WW1 some children signed up (I believe the youngest was 13), but at least in the UK those who were affected were indirect casualties, mostly the children of servicemen who were killed or injured. On the continent children must have been displaced when their towns became war zones. 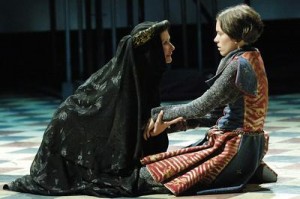 Shakespeare shows us many children affected by war. In King John, Arthur is a pawn of the conflicts between warring adults, his life threatened because he is politically useful –  he could be put on the throne by the faction against the King. He’s an indirect casualty of the adult conflict, and his mother Constance speaks of her loss:
…therefore never, never
Must I behold my pretty Arthur more.

In the final part of Shakespeare’s great trilogy about civil war, Henry VI Part 3, two children are used in a tit for tat battle. In revenge for his father’s death at the hands of York, Clifford in turn kills York’s youngest son, Rutland. When York is captured and brought before Queen Margaret, in one of the cruellest scenes of this desolate play she taunts him with a cloth soaked in the blood of his son:
And if thine eyes can water for his death,
I give thee this to dry thy cheeks withal.

York responds:
O tiger’s heart wrapp’d in a woman’s hide!
How could thou drain the life-blood of the child,
To bid the father wipe his eyes withal,
And yet be seen to bear a woman’s face?

Later, in retaliation for her action, Margaret’s son Prince Edward is stabbed to death before her eyes. She accuses his killers:
Butchers and villains! bloody cannibals!
How sweet a plant have you untimely cropp’d!
You have no children, butchers; if you had,
The thought of them would have stirr’d up remorse:
But if you ever chance to have a child,
Look in his youth to have him so cut off
As, deathsmen, you have rid this sweet young prince!
The cycle of violence continues.

And in Henry V, amid the battles, the non-combatant boys are brought into the conflict. During the battle of Agincourt the French attack the English camp and kill the boys. Fluellen, always one for playing strictly by the rules, is outraged: “Kill the boys and the luggage! ‘Tis expressly against the law of arms”.

Unlike the other boys killed in war, who hardly have time to establish themselves as characters, the boy in Henry V has become familiar to the audience. Back in London he had announced the Falstaff’s final illness, and he’s associated with Mistress Quickly and the other low-life characters.  In France he shows himself to be more grown-up than Bardolph, Pistol and Nym who he serves, and like the children of Syria, adult before his time: “As young as I am, I have observed these three swaggerers. I am boy to them all three, but all they three, though they would serve me, could not be man to me, for indeed three such antics do not amount to a man”. They encourage him to steal “which makes much against my manhood”.

Doucet’s documentary is heartbreaking, and a worthy contribution to the  current commemorations of war. While we honour those who gave their lives and fought for what they hoped was a noble cause, we should also remember that war continues to bring tragedy to the lives of civilians and children. If you want to see her documentary, it is still available on IPlayer until the end of Monday 4 August.

2 Responses to Children at war