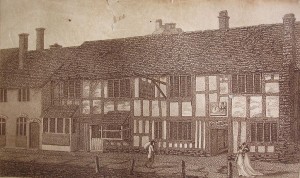 The birthplace in the early nineteenth century

Americans have visited Stratford on the Shakespeare trail since the very earliest days. Many thousands visited in the years between the Garrick Jubilee that began the popularisation of Stratford and the purchase of Shakespeare’s Birthplace in 1847. Between 7 and 11 April 1786 two men who were to become presidents of the USA, John Adams and Thomas Jefferson, made a journey together from London to the Midlands, passing through Oxford and Blenheim before reaching Stratford. According to his wife, Mr Adams fell on the ground and kissed it when he reached the Birthplace: Jefferson, always careful with his money, thought the entrance fee to the Birthplace too high.

Jefferson and Adams were both in Europe on diplomatic and trade business. Adams was well known for his interest in Shakespeare and passed it on to his son, another future president, John Quincy Adams. The Folger Shakespeare library’s website contains a fascinating page detailing the many links between American presidents and Shakespeare.

Another famous early American visitor was writer Washington Irving, feted on both sides of the Atlantic. He lived in Europe from 1815 to 1832, publishing The Sketch Book of Geoffrey Crayon, Gent. between 1819 and 1820. In these essays he paid tribute to Shakespeare, and described his visits to Stratford where he stayed at the Red Horse Hotel (Marks and Spencer retains its frontage).

During this period, between 1769 and about 1850, there were no permanent organisations to care for the town’s Shakespearean heritage. The Shakespearean Club set up in 1824 began to change this, originally formed to arrange celebrations of Shakespeare’s birthday, within a few years it took on more responsibilities and looked to attract funds to pay for improvements. The Birthday celebrations needed to bring in acts and personalities to attract a wider audience. Expensive costumes were hired from London theatres, and high-profile entertainers were brought in. The first American to take part in Birthday celebrations was “Mr Blackmore (the American) of the Royal Gardens, Vauxhall” who in 1830 was to “perform an astonishing ascent to the enormous height of near 80 feet, on the Tight Rope”. 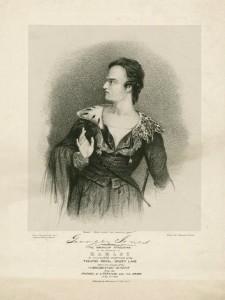 In 1835 the young American actor George Jones, always known as “The American Tragedian” attended the dinner celebrating Shakespeare’s Birthday. A toast was proposed to him as a representative of the American theatre. His response, reported in the Warwick Advertiser, was pretty pedestrian stuff, but Jones must have impressed because in 1836 he was invited to deliver the First Annual Jubilee Oration. The speech went on for two hours, the published text being fifty-two pages long. It was delivered at the Theatre in Chapel Lane, the boxes being reserved for Ladies,  followed by dinner at Shakespeare’s Hall (at which Ladies were not allowed).

In his speech Jones suggested that America’s greatest asset is the language of Shakespeare, inherited from England: she “hath within  her heart a secret pride, which she would not exchange for any, in visionary thought, or stern reality: – it is a pride posterity will find within her laws; penned within her archives; and traced upon the tablet of her fame. – It is a pride breathing through her very language”.

The high-profile aim of the Club was to raise funds to repair the chancel of Holy Trinity Church and its memorials to the Shakespeare family, for which is set up the Shakespearean Monumental Committee, with a London counterpart. For Jones’s oration, the National Standard of the United States flew above the stage alongside the Union Jack, and Jones donated the American flag to Stratford for it to be flown in future at the Birthday. There must have been a hope that this would encourage donations from the United States. As far as I’ve found, this was the first time the American flag was flown in Stratford: it was not until 1907 that foreign flags were flown on Shakespeare’s birthday, though in 1896 the US Ambassador attended the Birthday luncheon.

The 1836 poem The Pilgrim of Avon (written by Jones under the pseudonym Leigh Cliffe) imagines a pilgrim falling asleep in the birthroom. A footnote to the poem reads “my valued and enthusiastic friend, Mr George Jones, actually passed the night of the 25th of April 1835, on the oaken floor of the room in which the Bard was born; being, I believe, the first person that has ever done so since the room has been shewn”. The custodian seems to have thought it unusual, but not irregular, and presumably Jones paid well for the privilege. Just a couple of nights before, Jones had taken part in that dinner at Shakespeare’s Hall. 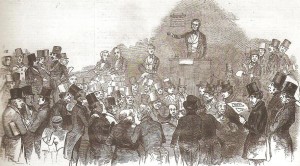 The auction for the Birthplace. Jones is the tall man near the back on the left

George Jones liked to be provocative, and was not a reliable friend to Stratford. The story above is told in Julia Thomas’s book Shakespeare’s Shrine, as is the story that at  the time of the sale of the Birthplace in 1847 Jones organised a “People’s Central Committee ” to raise money to buy the house. His attempt to raise funds by appealing to the working classes was mocked, and Jones was seen as a showman. He formed an alliance with American circus-owner P T Barnum who proposed taking the Birthplace to the USA, though it is never clear whether this was a serious challenge. At the auction of the house in September 1847 Jones retaliated, attempting to disrupt proceedings by calling on the auctioneer to prove that Shakespeare had been born in the house.

In spite of Jones’s tactlessness, Americans have always been welcome and generous visitors. Over the next couple of weeks I’m going to be looking at other contributions made by Americans to Shakespeare’s Stratford.