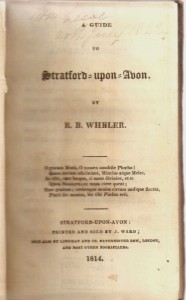 2014 is being celebrated as the 450th anniversary of Shakespeare’s birth, but in Stratford there is also another significant anniversary this year. It is just 200 years since Robert Bell Wheler published his Guide to Stratford-upon-Avon. Aged 21, Wheler had already, in 1806, written another book on the town, his History and Antiquities of Stratford-upon-Avon, comprising a Description of the Collegiate Church, the Life of Shakespeare, and Copies of several documents relating to him and his Family, never before printed. The guide was abridged from the earlier book with the addition of extra material and both were printed locally, by J Ward. They are both important as they contain, as the title page of the History suggests, transcripts of documents not at the time generally known, Wheler and fellow-antiquarian Captain James Saunders having been allowed access to the records of the town. 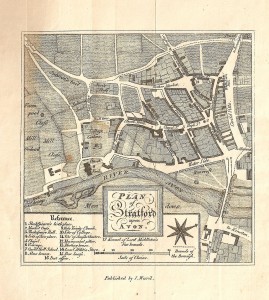 The map of Stratford from Wheler’s 1814 Guide

The History also contains eight engravings of views of the town, biographical sketches of other “eminent characters”, and an account of the Garrick Jubilee from 1769. The Guide contains a map of the town, though one had been published several decades earlier, and enhanced biographical material as well as an additional chapter on “Shakespeare’s Ring”, which had been found near the church in 1810 and had been immediately acquired by Wheler “I purchased it upon the same day for thirty-six shillings, (the current value of the gold)”.

His chapters cover most of the sights included in modern guide books: a historical account of the town, the Birthplace, New Place, the Guild Chapel, the Church. Some buildings are known by a different name now (Shakespeare’s Hall is the Town Hall), and some, like the College, have been pulled down, their existence now only remembered in street names (College Street and College Lane are both near the Church and the College itself was situated very roughly where the Parish Hall is today). There is, quite rightly, a section on the Great Stone Bridge (Clopton Bridge), though I doubt if anybody would give two pages to the footbridge now known as Lucy’s Mill Bridge, which he calls simply Mill Bridge.

Here is Wheler’s account of the geographical location of the town:
Stratford is pleasantly situated upon the south-west border of the county of Warwick, on a gentle ascent from the banks of the Avon; which derives its source from a spring called Avon Well, in the village of Naseby, in Northamptonshire; and continuing its meandering course in a South-west direction approaches Stratford in a broad and proudly swelling stream, unequaled in any other part of this beautiful river. The name of Stratford is undoubtedly derived from its situation on the Great North road leading from London to Birmingham, Shrewsbury, and Holyhead; straete or stret, signifying in the Saxon language a street or highway; and the word ford, alluding to the passage through the Avon parallel with the great bridge.

Robert Bell Wheler was born and lived all his at the home of his father, Robert Wheler who died in 1819. With him lived his sisters Anne and Elizabeth, none of whom married. He went to the local grammar school and was articled to his father, a solicitor. Becoming a solicitor himself gave him the knowledge to examine and understand the documents relating to the history of the town. He seems hardly ever to have left Stratford except in 1812 when he was obliged to spend a month in London for his formal admission as a solicitor.

Shakespearean research, though, was Wheler’s passion. His Guide to Stratford contained, as well as information about places, biographies of both Shakespeare and his illustrious son-in-law, Doctor John Hall. He contributed articles on Shakespearian subjects to the Gentleman’s Magazine, and corresponded frequently with the influential London antiquary John Britton. Much of his correspondence, as well as other manuscript material still exists at the Shakespeare Centre Library and Archive where they are a major source of information about the history of the town. He was secretary to the committee organising the 1816 celebrations marking the bicentenary of Shakespeare’s death, and was involved in the drive from 1820-23 to raise money for a mausoleum to be erected to the memory of Shakespeare, which eventually came to nothing. 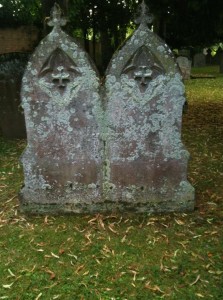 After Wheler’s death on 15 July 1857 he was buried beside his father in the Churchyard of Holy Trinity. Buried in the same double grave are his two sisters, Elizabeth who died in 1852 and Anne who died in 1870. This grave is prominently positioned just to the left as you enter the graveyard: from the gravestones the house in which they all lived in Old Town can  be seen. As historians and solicitors father and son must have given much thought to their own ends.

When I was researching the American windows in Holy Trinity Church I was surprised to find that there is a window dedicated to Wheler which is positioned, appropriately, almost opposite the monument to Shakespeare. 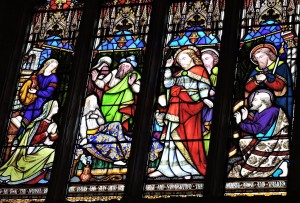 They are the four upper lights in the second window from the east end, and they depict the raising of Jairus’s daughter. The brass plaque below the window reads: “The above four compartments of this window were enriched by stained glass in memory of Robert Bell Wheler the historian of Stratford who deceased 1857 aged 72 years”.