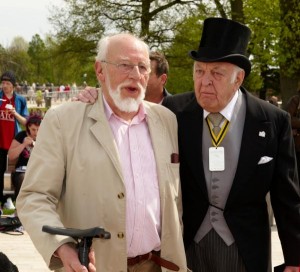 I was sorry to hear of the death on 11 September 2014 of Donald Sinden, like Jeffery Dench who died in March an actor who had made a considerable contribution to productions of Shakespeare’s plays in Stratford-upon-Avon. Both men will be fondly remembered for their outstanding performances in comedy, history and tragedy, though personally I remember them both best in comic roles. As the photograph shows, they both also took part enthusiastically in the annual Shakespeare Birthday Celebrations that honour Shakespeare in his home town.

Donald Sinden acquired national and international fame through acting in films and television, but as well as starting his professional work on stage he remained closely involved in theatre and its history. He was the longest-standing president of the Royal Theatrical Fund and as recently as 2013 presented a documentary series on Great West End Theatres for Sky Arts. Always in demand, he claimed to have been unemployed for just five weeks between 1942 and 2008. Here are links to obituaries from the BBC, the Daily Telegraph and The Stage. 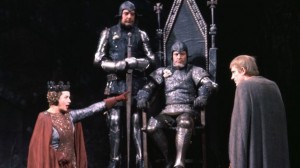 His career at Stratford started in 1946 when his roles included Le Beau in As You Like It, Arviragus in Cymbeline and Dumain in the iconoclastic director Peter Brook’s production of Love’s Labour’s Lost. He played the Duke of York in The Wars of the Roses, the 1963 trilogy that defined the RSC in its early years. Later he played both Henry VIII and Malvolio in 1969, and pulled off another unlikely doubling with Benedick and King Lear in 1976.

After a long gap he made welcome returns to the Stratford stage in John Barton’s programme The Hollow Crown in 2002 and 2005 in performances that were part of international and national tours. Other participants included Derek Jacobi, Ian Richardson, Janet Suzman, Clive Francis, Alan Howard, Harriet Walter and Richard Johnson.

Jeffery Dench’s contribution was lower-key, but no less important. In his tribute, the Company’s Artistic Director Gregory Doran said “Jeffery was the kind of actor that made the RSC what it is: he did not necessarily always play the leading roles, but proved by his presence that the company’s vitality lies in its strength on depth”. His loss has been very deeply felt by Stratfordians amongst whom he lived, to whose charitable causes he gave time and energy. During a career that stretched over four decades he appeared in dozens of productions for the RSC, several of which also featured Donald Sinden. They first worked together in The Wars of the Roses, then later in Henry VIII, in the hugely successful revival of London Assurance, performed in London in the seventies, and in the 1979 Othello.

On Sunday 5 October a concert and reading to commemorate Jeffery Dench is being held by English Serenata, a music group consisting largely of professional musicians who work or worked with the RSC in Stratford. Gabrielle Leese, director and player, writes: “We chose the Shakespeare Garland because of all the work we have shared with Jeffery, this programme epitomises him and his career most. Not only is it a tribute to a fine actor, but it reflects the interest which the then full-time RSC band felt in their heritage of music for Shakespeare. However, principally it is English Serenata’s memorial to Jeffery, as our much loved patron, who toured with us many times and with the former English Serenata Youth Choir”.

Jeffery Dench and Ian Hughes in Merry Wives the Musical, 2006-7

She continues “no-one has evoked the atmosphere or Stratford, that busy little market town, more effectively than Jeffery…. The programme traces the story of Shakespeare and music inspired by his plays, as performed in Stratford-upon-Avon, from the time of Shakespeare’s death to Jeffery’s last performance at the RST in Merry Wives the Musical in 2007.” It will include music by distinguished composers including Ralph Vaughan Williams, Guy Woolfenden, Richard Rodney Bennett, James Walker, John Gardner, Howard Blake, Jeremy Sams and Nigel Hess, as well as personal reminiscences by friends and family.

Performers on the 5th will include RSC actors Katy Stephens, Sam Alexander and Oliver Dench (who is also Jeffery’s grandson), and soprano Lois Murray. The performance will take place at The Barn, in Bidford-on-Avon at 7.30pm and full information is available on English Serenata’s website.

This entry was posted in Shakespeare on Stage, Stratford-upon-Avon and tagged Donald Sinden, English Serenata, Jeffery Dench. Bookmark the permalink.