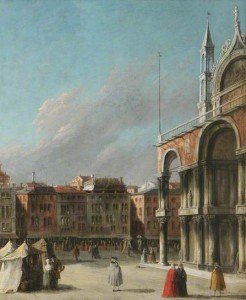 The RSC recently announced its Summer 2015 season, beginning in March. They’ll be focusing on the Italian city Venice, with three plays that are fully or partly set there: The Merchant of Venice, Othello, and Ben Jonson’s Volpone. It’s sure to be interesting to take a look at the city through the eyes of two English renaissance writers. In his piece written for the RSC Members News, Artistic Director Greg Doran suggests “Venice to the Elizabethan mind was a mixture of Wall Street and the red light district of Amsterdam. It was a hub of international trade, and seedy corruption”.

Today Venice retains its air of glamour and sophistication, if not the seedy corruption. It was recently chosen as the venue for the lavish three-day celebration of George Clooney’s wedding to Amal Alamuddin, and described by George Clooney’s father in his speech as “The loveliest, most intriguing city on the planet”.

Shakespeare’s plays set in the city are also among his most controversial. Productions of The Merchant of Venice, along with The Taming of the Shrew (also set in Italy but not in Venice), regularly generate demands that they should not be performed. The three plays often offend modern sensibilities, raising issues regarding gender, race and religion and the rights of all people for equality and respect.  In the sixteenth century Venice and London were both thriving trading centres and using Venice as a location allowed both Shakespeare and Jonson to examine the same hot issues from a safe distance. 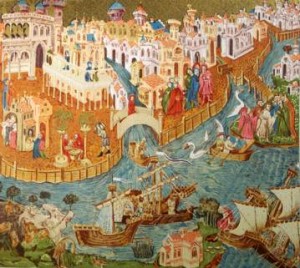 An early view of Venice

The 2012 British Museum exhibition Shakespeare: Staging the World devoted a whole section to Venice. In the book of the exhibition Jonathan Bate writes that it was “a fair city, an open society grown rich on maritime trade, a multicultural population, a place of fashionable innovation and questionable morals: in Venice Londoners saw an image of their own desires and fears, their own future”.  Many travellers wrote descriptions of this city. John Florio, in his Florio his First Fruites, published in 1578, wrote “You shal see a fayre citie, riche, sumptuous, strong, wel furnished, adorned with fayre women, populated of many people, abundant, and plentiful of al good things”. 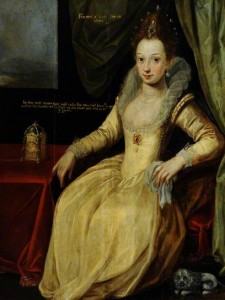 Venice’s sexual sophistication  was certainly controversial. Venetian women were famed for their beauty, but prostitutes operated much more openly than in England. A catalogue printed in 1570 gave the names of 215 available women in Venice, complete with prices. The list included women ranking from courtesans downwards, only omitting prostitutes who worked within brothels. In such a setting it was possible for Othello to be persuaded by Iago to think that his wife was licentious:
In Venice they do let heaven see the pranks
They dare not show their husbands: their best conscience
Is not to leave’t undone, but kept unknown.

An English visitor, Thomas Coryate, was so impressed by the appearance and behaviour of women in Venice that he wrote about it, and other travellers recorded their fashions in records they kept of their experiences. Their extravagance was encouraged by the prosperity of the city.

Venice was above all a great city of international trade, as Shakespeare comments in The Merchant of Venice: “the trade and profit of the city/ Consisteth of all nations”. Setting his plays in this exotic location Shakespeare was able to examine the uncomfortable relationship between foreigners and the resident population. In London in the 1590s tension was high between English workers and immigrants, and Jews were a traditional target.

Neither Shakespeare nor Jonson paint a particularly attractive picture of Venice, but Jonson’s city is full of and corrupt parasites, whereas Shakespeare’s Venetians are human, for all their weaknesses. Jonson’s leading character, Volpone, is a con man who pretends to be at death’s door in order to get lavish gifts from those who hope to inherit his wealth. In this moral fable the plot is turned back on himself as he’s betrayed by his servant Mosca. The idea of Venice, you feel, held little fascination for Jonson. 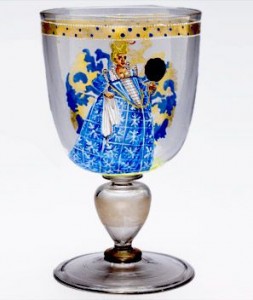 In his book Shakespeare’s Restless World, British Museum Director Neil MacGregor chose to represent Shakespeare’s Venice with a luxurious glass goblet. Venetian glass, beautifully-decorated, was expensive and in demand all over Europe. As the goblet is made up of ingredients from many countries it represents the city’s trading links. Dora Thornton of the British Museum explains “The striking cobalt blue is likely to come from the Erzgebirge region on the German-Czech border. The white, which is made from tin oxide, is made using tin that has probably come from Cornwall or Britanny. And the gold, heavily used all over the rim and for touching up details and for the arms,  is probably from Africa”. On one side the glass is decorated with a glamorous Venetian lady, perhaps a courtesan, while the other side features a coat of arms that is almost certainly German. There was a large market in Germany for Venetian drinking glasses: indeed in The Merchant of Venice Portia’s German suitor is characterised as being a heavy drinker. The goblet then represents the preoccupations of Shakespeare and Jonson regarding Venice where beauty, indulgence, wealth and sensuality come together. We’ll have to wait to see how these qualities manifest themselves on the RSC’s stages in 2015.

This entry was posted in Shakespeare on Stage, Shakespeare's World and tagged Ben Jonson, British Museum, Othello, The Merchant of Venice, Venice, Volpone. Bookmark the permalink.