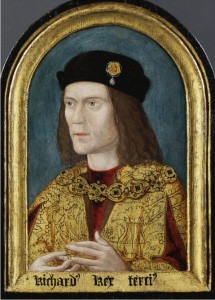 It’s almost two years since it was announced live on national TV that the skeleton discovered under a car park in Leicester was indeed that of King Richard III, killed at the Battle of Bosworth in 1485. I watched the whole of the press conference at which a series of experts gave their evidence. It is one of the most exciting of recent stories relating to any period of history, and has been a triumph for academics from a number of disciplines including archaeology, forensic science and DNA analysis. It’s unusual for medieval historians and scientists to receive so much public attention but this “missing persons case” combines our love of detective stories with the fascination with Richard III himself.

In December 2014 additional information was released based on the DNA analysis.  This page includes links to a 12-minute video summarising the findings and a one-hour podcast including a discussion between some of those most intimately involved.

Last year the University of Leicester, which had carried out the investigation, put together a MOOC (a free online course) on the subject of England in the time of Richard III, which is now being re-run by FutureLearn.  Deirdre O’Sullivan, Lecturer in Medieval Archaeology at the University, who is in charge of the course, explains “To mark these new events in Richard’s story, we have updated the course to reflect the latest research… The next run of the course starts on 16 February, and most excitingly, during the final week of the course Richard III will be reinterred within Leicester Cathedral. I will be attending the burial service [on Thursday 26 March 2015] and I’ve managed to get exclusive interviews with the Dean and others involved: plus you’ll be able to follow events live, as they build up to the service within the Cathedral.”

All the information you might want to know about the reinterral can be found here. The DNA analysis suggests that Richard had fair hair and blue eyes, and although the evidence that the skeleton is Richard III’s is overwhelming, the video and podcast explain that there are breaks in the DNA chain, “a false-paternity event”, which questions the legitimacy of perhaps the Plantagenet or Tudor monarchs.

Here’s a link to the full journal article published in Nature Communications, and this is the abstract:
In 2012, a skeleton was excavated at the presumed site of the Grey Friars friary in Leicester, the last-known resting place of King Richard III. Archaeological, osteological and radiocarbon dating data were consistent with these being his remains. Here we report DNA analyses of both the skeletal remains and living relatives of Richard III. We find a perfect mitochondrial DNA match between the sequence obtained from the remains and one living relative, and a single-base substitution when compared with a second relative. Y-chromosome haplotypes from male-line relatives and the remains do not match, which could be attributed to a false-paternity event occurring in any of the intervening generations. DNA-predicted hair and eye colour are consistent with Richard’s appearance in an early portrait. We calculate likelihood ratios for the non-genetic and genetic data separately, and combined, and conclude that the evidence for the remains being those of Richard III is overwhelming. 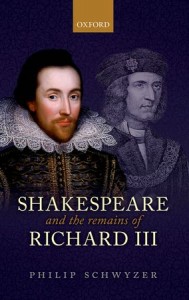 Like it or not, the huge interest in Richard III would not be so great without Shakespeare’s great play and its exciting protagonist. Philip Schwyzer’s book Shakespeare and the remains of Richard III was published in 2013 and is about to be released in paperback. It too looks at the subject from a variety of viewpoints, considering where Shakespeare found his information, the intellectual history of the period, and the discoveries in Leicester. According to the publishers “The final emphasis is not only on what Shakespeare does with the traces of Richard’s reign but also on what those traces do through Shakespeare – the play, in spite of its own pessimistic assumptions about history, has become the medium whereby certain fragments and remains of a long-lost world live on into the present day.”

With King Richard III finally being found some of the questions  surrounding him have been answered. But even if it is proved that he was not the murderer portrayed by Shakespeare, it seems unlikely that the play Richard III will lose its hold on public imagination.

This entry was posted in Legacy, Shakespeare's World, Sources and tagged burial, FutureLearn, MOOC, Philip Schwyzer, Richard III, The King in the Car Park, University of Leicester. Bookmark the permalink.