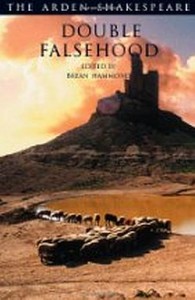 The Arden edition of Double Falsehood

A few days ago I read the announcement that a new play by Shakespeare had been discovered. Well don’t get too excited because this is another bit of research looking at the Cardenio/Double Falsehood issue. I wrote a summary of the evidence for this back in January 2014, and you’ll also find descriptions of the whole intriguing story if you follow some of the links below.  The new study does, however, claim to break new ground by being based on a scientific analysis by the University of Texas.

“The authors of this research, Ryan Boyd and James Pennebaker, used computer software to analyse the text of the play to recognise linguistic patterns and signatures common to Shakespeare’s widely recognised works. These include the use of pronouns and prepositions, and words that fall into certain thematic categories, including emotion, family and religion.”

Using computers to do this kind of statistical research is nothing new: Stylometry has been around for decades and is notoriously unreliable, at least with identifying early modern writers. This post for instance suggests that stylometry has been used to prove that Marlowe and Shakespeare’s work is indistinguishable and therefore Marlowe was Shakespeare. I can’t help feeling a little sceptical about all these results, though I’m sure the tools developed by the University of Texas are advanced, and the attempts are genuine. This article explains a little more:

“University of Texas researchers have unveiled a sophisticated new study of Double Falsehood that used text-analysing software that helped create a ‘psychological signature of the playwright.”

“I am quite confident that Shakespeare had a direct hand in writing Double Falsehood. Put me down for 97 per cent confident,” University of Texas social psychologist James Pennebaker, co-author of the study published in the journal Psychological Science, said on Friday.”

It’s a play that Michael Billington suggested “is as full of echoes as a whispering gallery”. And traditional scholars can see the point of using computers to analyse data. In 2011 Gary Taylor wrote a piece explaining that what was needed to get back to Shakespeare in this play was “a lot of painstaking (read: boring) work with databases, a bit like paleontologists slowly brushing away the stone that surrounds dinosaur bones.”

Gary Taylor has spent years looking at the play and concludes that if you’ve read or seen a version of it you’ve almost certainly been disappointed “because what you have seen has contained a lot of Lewis Theobald, and Theobald will never satisfy anyone’s expectations of Shakespeare or Cervantes. The first thing we need to do is get rid of Theobald.” 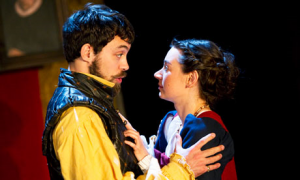 Alex Hassell and Pippa Nixon in the RSC production of Cardenio, 2011

And in his introduction of the version of Cardenio staged by the RSC in 2011, Gregory Doran notes that Theobald admitted he had adapted the play for the tastes and sensibilities of the London audience of his time.

Theobald had edited Shakespeare’s plays and was immersed in his writing, so it would be no surprise if he was able to imitate Shakespeare’s style. And there would have been no shame in doing so. His plays had been rewritten to suit the fashions of the time ever since the Restoration period of the 1660s. Indeed most of the versions of Shakespeare’s plays that were seen at the time Double Falsehood was staged, in 1727, had been substantially rewritten.

What’s most surprising is the suggestion (again) that this is a new discovery. With a complete edition for the Arden in 2009, edited by Brean Hammond, a republishing of the play in the RSC’s collection of Collaborative Plays in 2013, and several productions of a variety of texts, Double Falsehood/Cardenio is not exactly news.

The Independent at least credits Brean Hammond, and quotes his generous view:

“In 2010 scholarly discussion was reignited when Professor Brean Hammond of the University of Nottingham published the play in its fully annotated form claiming that he believed it to be a collaboration between Shakespeare and the dramatist John Fletcher.

He hailed the Texan researchers for having “a more objective view” than some literary scholars but suggested their work might “draw suspicion” for its analysis of the words belonging to content categories which are arguably arbitrary.

“I think that Shakespeare’s DNA can be found in the play so anything that supports that view is good in my opinion,” Professor Hammond told the Independent.”

In his own introduction, though, Professor Hammond notes that the play could also have been at least part-authored by James Shirley, Philip Massinger, as well as Fletcher.

Hammond also noted that Double Falsehood “could be substantiated beyond all doubt only by the discovery of an authenticable manuscript or altogether disproved by other equally convincing forms of external evidence”. We’re not there yet.

One Response to Shakespeare’s undiscovered play?