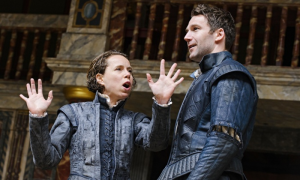 Michelle Terry as Rosalind and Simon Harrison as Orlando at Shakespeare’s Globe 2015. Photo by Tristram Kenton

Michelle Terry is blasting her way through Shakespeare’s forthright heroines. Having spent the winter playing Rosaline in Love’s Labour’s Lost and Beatrice in Much Ado About Nothing, both for the RSC in Stratford, she is now taking on Shakespeare’s most “feisty female protagonist”, Rosalind in As You Like It at Shakespeare’s Globe, to great acclaim.

On paper, As You Like It sounds like a blandly pretty pastoral romance with its shepherds and shepherdesses and comic rustics. It’s true that not a lot happens in the play in the dramatic sense, but I’ve always loved it for what goes on under the skin of the characters, and Arden rises above being just a pretty forest into a place where anything is possible. Susannah Clapp, in her Guardian review, describes the play as “St Crispin’s Day for girls”.

Radio 4’s Front Row on Monday 25 May looked at As You Like It from the viewpoint of three Rosalinds: Michelle Terry, Juliet Stevenson and Niamh Cusack. Stevenson and Cusack played the role for the RSC in Stratford in 1985 and 1996 respectively. Towards the end of the 1980s Carol Rutter interviewed a group of women who between them had played most of Shakespeare’s young women, in her book Clamorous Voices. My favourite chapter is the one about As You Like It, which focuses on that 1985 production, and most of the quotes that follow are from it. Stevenson described Arden as “a metaphor, a landscape of the imagination and a realm of possibility, a place where gender definitions can be turned on their heads”. The Court of the first few scenes is “structured around traditionally male values, …a place where the idea of having a good time is …to watch two men bashing the life out of each other, [where] … violence …characterises many of the relationships”. 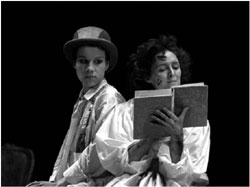 Then the girls, Celia and Rosalind, escape to Arden. “In Shakespeare, whenever you go into the country you’re going into an anarchic territory where social structures don’t apply….Anything can happen there”. In 1985 “Our Arden didn’t have trees or logs. It had mirrors, a clock that didn’t tick – because time is suspended there – and swags of white silk that could be used in many ways, to create many images. It was a place that allowed for chaos”…”almost like the projected imagination”.

In her interview, Stevenson notes that the setting wasn’t always helpful, and I remember the visual metaphors occasionally being a bit strained, but it allowed Stevenson’s cheeky Rosalind, dressed in a baggy white suit, to take off, and for an examination of the core of the play. Juliet Stevenson again: “I’d always suspected that there’s a much more dangerous play in As You Like It. A subversive play, one that challenges notions of gender, that asks questions about the boundaries and qualities of our “male” and “female” natures”. One of the great bonuses was the relationship between Rosalind and Celia (Fiona Shaw). “I had never seen this friendship fully explored”. It’s the “greatest female friendship in all of Shakespeare”. Stanley Wells, in his book Sex and Shakespeare, supposes that “Lesbians might be especially interested in the relationship between Celia and Rosalind in As You Like It“, but there’s no suggestion of an erotic relationship in it or in any of those female friendships: Beatrice and Hero, Helena and Hermia. It’s acutely observed, right down to the way in which Celia feels betrayed by her friend as she falls in love. Carol Rutter’s chapter quotes Sinead Cusack as Celia in 1980. “She’s leaving me; that closeness and that intimacy are going, and I don’t want it to. I’m hurt”. Celia, more dominant at the start of the play, becomes a spectator. In 1985 the two became friends in real life “The only way to do this play was to do it together”, comments Fiona Shaw. 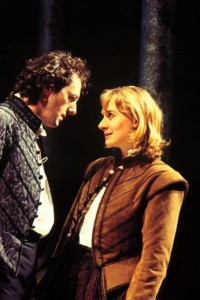 Their relationship is just one of the forms of love within the play. Juliet Stevenson again: “The love of an old shepherd for a young shepherd. The love of one girl for another. The love of a poet for a shepherdess. The love of an old servant for his master, and his master for him. It’s about all those people”. It’s most, though, about the love between Rosalind and Orlando. Both Niamh Cusack and Juliet Stevenson have described Rosalind as their favourite Shakespeare role, and in Front Row they separately picked out the same few lines as the ones they most enjoyed performing:
O coz, coz, coz, my pretty little coz, that thou didst know how many fathom deep I am in love! But it cannot be sounded; my affection hath an unknown bottom, like the Bay of Portugal.

Over at Shakespeare’s Globe, according to the Guardian review, “At its big, beating, skittish heart is Michelle Terry’s winning Rosalind, who walks about in a daze and is lost as soon as Simon Harrison’s Orlando removes his shirt for the wrestling match.” It goes on to describe her Rosalind’s “emotional recklessness” and “unaffected openness”: it sounds like an unmissable performance of this terrific role.

This entry was posted in Legacy, Shakespeare on Stage and tagged As You Like it, Fiona Shaw, Juliet Stevenson, Michelle Terry, Niamh Cusack, Sinead Cusack. Bookmark the permalink.

One Response to Rosalinds in Arden