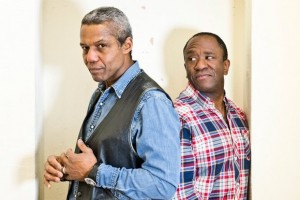 When Hugh Quarshie’s taking of the role of Othello was first announced, it was this casting that drew the media attention. He had, some decades ago, apparently burned this particular boat by declaring, in print, that Othello should not be played by a black actor. This was not, however, to be the production’s only coup: Lucian Msamati was to play Iago, the first black actor to play the role for a major UK theatre company.  In the last few months, the emphasis has shifted to the performing of this role, easily the longest in the play.

Rory Kinnear as Iago, Adrian Lester as Othello at the National Theatre

Recently The Guardian published interviews with three men who have played the role at the National and the RSC. In an article entitled Green-eyed monsters Rory Kinnear, Antony Sher and Richard McCabe all talked about their approach to the role and in particular what they feel makes him tick. For Kinnear it was about jealousy, for Sher a blend of sexual inadequacy and racism, and for McCabe inferiority and sexual jealousy. McCabe also unusually introduced moments of self-doubt into his performance.

Msamati had been asked before about playing Othello, and according to an interview in the Sunday Times on 24 May (not freely available online) he had responded “there is only one role that I am interested in doing [in that play], and that is Iago”. For Msamati, instead of a “holy grail for black actors”, Othello can be “an albatross”. Msamati : “I continue to resent the notion that the height of my ambition or achievement as an actor of a particular persuasion is to one day play the Moor. Umm, excuse me very much!”.

In an online interview published just as the production was opening, Msamati was asked “Why a black Iago?”. He explained: “We did a workshop to explore ideas this summer. It was just about getting actors into a room to see if this will work as a play…. I think the most valuable thing for me was that within a matter of minutes (at) the workshop, it was absolutely clear to everybody that this was going to work.

With both Othello and his trusted second-in-command Iago black, the dynamic changed. From the Sunday Times again: “It opens up so many questions – for starters, blowing up the crusty assumption that a shared skin colour means shared affection. “You don’t even have to go as far back as Hutus versus Tutsis in Rwanda” Quarshie sighs. “It’s been going on for years. ” 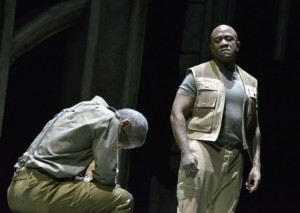 Hugh Quarshie as Othello, Lucian Msamati as Iago in the RSC’s 2015 Othello

And in the Media Diversified interview with Msamati: “[Race] is not an issue at all… And in actual fact, it addresses the character of Iago in a very different way, I think. Because suddenly, it heightens – for me anyway – the sense of betrayal. The sense of broken trust, the sense that you and I – as (Iago) says right at the beginning to Roderigo – we have fought in Rhodes, in Cyprus, on others’ grounds, Christian and heathen, we’ve seen war together, you and I, we are brothers. We’ve done it all together. But you went and chose that guy over me. When the tradition is – he goes on to say to Roderigo – the old tradition was that every second stands heir to the first. If you are the lieutenant, when the general passes over, you automatically take position. But this guy, what does he do? He takes the modern route, he disregards the entire system that has been in place.”

“Regardless of whether Othello’s decision is right or not, it’s the fact that Iago… feels betrayed by that. And that is something which I find has been very, very interesting and challenging as we go through this.”

Both actors feel that they can sympathise with the way Othello is a play about outsiders. Quarshie, in spite of an Oxbridge education and high-profile career on TV, still does not feel part of the mainstream. “You are somewhat marginalised; but also, partly,…after a while you think “Do I really want to be part of their club? And it’s like taking off a pair of shoes that’s been pinching you all day”.

Msamati, anglo-Zimbabwean, feels patronised by the UK’s theatre establishment and is interested in challenging it, suggesting, apparently seriously, that he would like to have a go at Juliet. Neither man sees the production as a gimmick or a politically-correct experiment, but a genuine investigation of the play.

This Sunday, 9 August, you will have the opportunity of hearing the two leading actors, along with Onyeka (historian, writer and lecturer) and Celia R Caputi (writer and Professor of English at Florida State University) discuss whether Othello can be considered a racist play. The debate is to be held at the Royal Shakespeare Theatre in Stratford-upon-Avon at 11am, and will look at the current production as well as examining the broader issue of what a contemporary interpretation of the play actually means. The production itself runs until 28 August 2015. If you’re not able to catch it onstage, it will be live streamed to cinemas on 26 August.

This entry was posted in Shakespeare on Stage and tagged Hugh Quarshie, Iago, Lucian Msamati, Othello, race. Bookmark the permalink.