The legend of Shakespeare’s crabtree 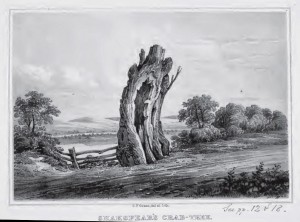 I recently wrote about the doggerel rhyme, alleged to have been written by Shakespeare, naming several of the villages near Stratford. The rhyme relates to Shakespeare’s Crab, an old crab-apple tree under which Shakespeare is supposed to have slept, which subsequently acquired magical powers. The legend can be traced back to the mid eighteenth-century, and is referred to by Garrick. The tree, along the main road to Bidford-on-Avon, became a minor shrine and target of souvenir hunters until what was left of it was rooted up in 1824.

After the tree had disappeared it acquired celebrity status. Charles Frederick Green, a Stratford man educated at Shakespeare’s school, published his 50-page account complete with illustrations, Shakespeare’s Crab Tree, around 1857.

The story was repeated in the June 27 1874 issue of All the Year Round, the popular journal founded by Charles Dickens and continued after his death by his son, also named Charles. It quotes directly from Green’s account. There were said to be two groups of drinkers from the Bidford area, the “Topers” and “Sippers”. “The Topers challenged all comers to a drinking match. “Early one Whit-Monday morning William Shakespeare and a few of his right merry boon companions, who had accepted the Topers’ challenge, started for Bidford, and, arriving there, had the mortification to find that the challengers had that very morning gone to Evesham fair on a similar errand; at this disappointment they resolved to take up with the Sippers, who had remained at home… Upon trial, however, the Stratfordians found themselves unequal to the contest, and were obliged to retire whilst they still retained the partial use of their legs. The poet and his comrades had not retreated more than a mile from the famous hostelrie of the Falcon – at which their capabilities had been tested, ere they lay down and bivouacked for the night, under the wide-spreading boughs of a thickly-blossomed crab-tree.”

“Upon waking in the morning Shakespeare’s companions endeavoured to persuade him to renew the contest; but…he declined, and looking round and pointing to the villages from which his adversaries had assembled, uttered the following epigram:
Piping Pebworth, Dancing Marston,
Haunted Hillboro, Hungry Grafton,
Dodging Exhall, Papist Wixford,
Beggarly Broom and Drunken Bidford. ”

Perhaps even before Green’s book, the well-known writer Douglas Jerrold had written several verses about the tree. Jerrold, a highly-regarded writer and wit who counted Charles Dickens as a good friend, died in 1857. Towards the end of World War 1 Jerrold’s journalist grandson Walter Jerrold wrote a book called Shakespeare-land that quotes the older Jerrold’s poem. Perhaps intending to coax Americans to visit England (the book was published in both the UK and USA) it contains coloured illustrations by E W Haslehurst. As well as Stratford’s beauty spots there are pictures of “Drunken Bidford”, “Papist Wixford” and “Beggarly Broom”, so powerful was the attraction of the rhyme and its legend. 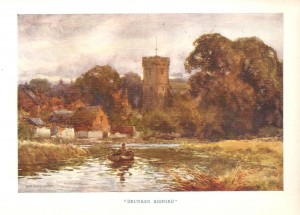 To Shakespeare’s mighty line
Let’s drink with heart and soul;
‘T will give a zest divine,
Though humble be the bowl.
Then drink while I essay,
In slipshod, careless rhyme,
A legendary lay
Of Willy’s golden time.

One balmy summer’s night,
As Stratford yeomen tell,
Our will, the royst’ring wight,
Beneath a crab tree fell;
And, sunk in deep repose,
The tipsy time beguiled,
Till Dan Apollo rose
Upon his greatest child.

Since then all people vowed
The tree had wondrous power:
With sense, with speech endowed,
‘T would prattle by the hour;
Though scattered far about,
Its remnants still would blab:
Mind, ere this fact you doubt, –
It was a female crab.

“I felt,” thus spoke the tree,
“As down the poet lay,
A touch, a thrill, a glee,
Ne’er felt before that day.
Along my verdant blood
A quick’ning sense did shoot,
Expanding every bud,
And rip’ning all my fruit.

“What sounds did move the air,
Around me and above!
The yell of mad despair,
The burning sigh of love!
Ambition, guilt-possessed,
Suspicion on the rack,
The ringing laugh and jest,
Begot by sherris-sack!

Since then, my branches full
Of Shakespeare’s vital heat,
My fruit, once crude and dull
Became, as honey sweet;
And when o’er plain and hill,
Each tree was leafless seen,
My boughs did flourish still
In everlasting green.”

And thus our moral food
Doth Shakespeare leaven still,
Enriching all the good
And less’ning all the ill;-
Thus, by his bounty shed
Like balm from angel’s wing,
Though winter scathe our head,
Our spirits dance with spring”.

The tree received official recognition when the Ordnance Survey map of 1887 marked its position. Today Crabtree Farm is just across the road from where it stood. Until recently Crabtree Garden Centre was next to the farmhouse: it has recently become Bidford-on-Avon Health Centre. The Bidford-on-Avon Wikipedia page claims that a descendant of Shakespeare’s Crab, known locally as Shakespeare’s Tree, still marks the spot. I’m sure that most of those travelling along the B439 (including, until now, me) pass it without any knowledge of this little piece of Shakespeariana.

Postscript: After posting this blog I spotted this entry on the Windows on Warwickshire site relating to a plaster model of Shakespeare asleep under the crab tree contained inside a wooden box. The label reads: ‘Shakespeare Asleep under the Crab Tree – This model was designed by Mr Edw[ard] Grubb of Stratford-upon-Avon, Sculptor, and was given by him to the late Mr Robert Bell Wheler, whose ~ sister, Miss Anne Wheler, gave it to Mr William Oakes Hunt, who, with her concurrence, presented it to the Town of Stratford-upon-Avon, to be ~ preserved in Shakespeare’s House.. 15 July 1861’. Edward Grubb was a well-known local artist and Robert Bell Wheler was a local antiquarian who wrote the first guide to the town as well as a longer book on the History and Antiquities of the town. It is thought to date from the late 1700s, and is now part of the Collections of the Shakespeare Birthplace Trust.