Posted on September 1, 2015 by Sylvia Morris 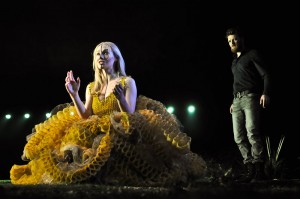 The Bell Shakespeare’s production of Macbeth

It’s easy, living in Stratford-upon-Avon, to get stuck in English and particularly RSC Shakespeare, so I’m indebted to Sally McLean and Elizabeth Schafer for bringing to my attention the vibrancy of Shakespeare on the other side of the planet, in Australia.

Australia has a long history of interest in Shakespeare: there were Shakespeare societies in both Adelaide and Melbourne in the early years of the twentieth century and many Australians have distinguished themselves in Shakespeare: actors Robert Helpmann, Cate Blanchett and Keith Michell, director Gale Edwards and designer Loudon Sainthill, to name just a few.

Many people will have heard of the Bell Shakespeare Company, founded by John Bell in 1990, based in Sydney, and just now performing The Tempest. John Bell, after leading the company for twenty-five years is, at the age of 75, handing over its direction to his co-director Peter Evans. Bell’s is an extraordinary achievement, and it’s to be hoped that the company will continue to thrive under its new leadership.

The Australian Shakespeare Company is based in Melbourne, performing accessible and contemporary productions. They are best known for the outdoor Shakespeare in the Park, but that’s not all they do. Their youth ensemble Bravehearts is for instance engaging young audiences by putting on a version of Romeo and Juliet later in September in Williamstown.

Another Melbourne-based project, just getting under way, is Shakespeare Republic. Their aim is to bring some of Shakespeare’s works to the small screen in a way that shows how relevant he is to modern life. You will find their trailer on their website and on their YouTube channel. They will be building a series of stand-alone episodes, each one featuring one of Shakespeare’s monologues or sonnets, with a slightly modern twist. As it’s all online we can all get a flavour of Shakespeare in Australia. From the look of the trailer it’s going to be a sophisticated twenty-first century series with its own particularly Australian flavour. 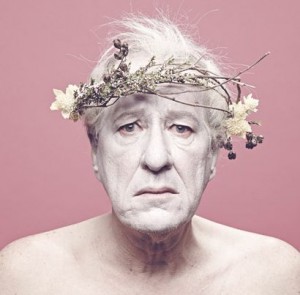 Later this year one of Australia’s best-known actors, Geoffrey Rush (Shakespeare in Love, The King’s Speech), will be playing King Lear with the Sydney Theatre Company from 24 November 2015 to 9 January 2016. It will be, it is claimed, “a King Lear like no other”. He’s no stranger to the play, but has been reading it with fresh eyes. In this interview Rush talks about how he sees the play “Lear… is a brilliant microcosm of a family that has become completely dysfunctional. They just happen to have the head of state as the father… The arrogance of leadership and the unchallengeable sense of authority. Lear is a kind of man who probably has no understanding of himself… The bigger metaphor is quite intriguing….It’s something that echoes the kind of torture and ruthlessness that we’re seeing going on diplomatically around the planet.”

In a piece she wrote for Shakespeare at the Centre back in 2007, Dr Elizabeth Schafer wrote about how what makes Australian Shakespeare distinctive is that it is “haunted by land rights”.

“Because European Settlement of Australia began …when Shakespeare was already a British national icon, Shakespeare, his thinking, his poetry, his politics, can be seen to have contributed to first contact. And this is why Simon Phillips’ production of The Tempest, for the Queensland Theatre Company…was so challenging. Casting Ariel and Caliban as indigenous added a painful poignancy to most of the action. Similarly any play dealing with land can become newly charged in Australia – whether this be King Lear directed by Gale Edwards and John Gaden, where the division of the kingdom begged the question of who actually owned that land, or As You Like It directed by Neil Armfield, with an …indigenous Rosalind, escaping to Arden, just like her dispossessed father. This distinctive take on the plays can serve as a useful reminder that Shakespeare knew about the lure of land ownership, the temptation to dispossess, and to enclose common land.” 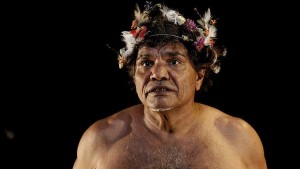 Tom E Lewis as Lear in The Shadow King

In the last couple of years these questions have been brought even more to the fore with The Shadow King, “after William Shakespeare”, based on King Lear. Originally performed at the Melbourne Festival in 2013 it was described in this review as “fascinating, ultimately shattering theatre”.

It has since toured to Sydney, Perth, Adelaide and Brisbane. This was the description when the production reached Adelaide: “Shakespeare’s timeless tragedy King Lear is an unmatched epic of connection, country, land, justice and despair. Now skillfully redefined as The Shadow King, this contemporary retelling speaks to the tangled legacy of Indigenous Australia in a sprawling combination of modern English, Aboriginal languages, Kriol, music and dance. A majestic performance.”

The English Guardian also reviewed it while in Melbourne, commenting on the central theme of land ownership: “After descending into madness and being cast adrift in the wilderness, Lear is reminded by Cordelia that he belongs to the land. As the red dust swirls and Lear dances and sings, the audience journey with him as he becomes healthy and whole again. Juxtaposed with destructive wealth generation and evil plotting, and Lear’s other daughters and Edmund, this scene has great resonance.”

It’s great news that this exciting theatrical event is being brought to the Barbican Theatre in London in 2016. Booking is already open.