Posted on September 5, 2015 by Sylvia Morris 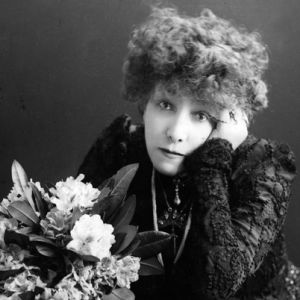 On Radio 4 Francine Stock is currently investigating the concept of charisma. This week in Pinning down the Butterfly: the It Factor, she looked at an actress whose fame spread across Europe and North America, the divine Sarah Bernhardt.

Bernhardt was born in 1844 and made her stage debut in 1862. Although she made her name in her native France playing roles such as Phedre in Racine’s intense drama, she loved Shakespeare and appeared as Cordelia in King Lear and Lady Macbeth. In 1899 she played Hamlet in a French adaptation of the play in twelve scenes. She carried on playing physically demanding roles until 1905 when she damaged a knee onstage, struggling on in increasing pain until having the leg amputated in 1915. Still a great star, the operation made front-page news. When she died in 1923, her funeral procession, seen in this footage, brought Paris to a standstill. [Recipients of the blog by email may need to go to the blog itself to view film clips. A link is at the end of the post.]

The production of Hamlet was brought to the Adelphi Theatre in London during 1899. The duel scene (heavily cut) was specially staged and filmed at the time.

Actress Elizabeth Robins published a full account of Bernhardt’s performance the following year. Even at the age of 55, “Madame Bernhardt’s assumption of masculinity is so cleverly carried out that one loses sight of Hamlet in one’s admiration for the tour de force of the actress… She gives us…a spirited boy; doing it with an impetuosity, a youthfulness, almost childish.” In giving advice to the players she was “a precocious young gentleman, who…thoroughly enjoys laying down the law to plodding professionals”. And in the play scene, “with something a little reminiscent of an urchin swarming over an orchard wall, [Hamlet] crawls up to the throne, till his eyes, not sombre and horror-stricken, but keen and glittering, are on a level with the King’s. When he has surprised the guilty terror there, this Hamlet actually bursts out into peal on peal of laughter. His clever trick has succeeded, his Schadenfreude overflows. ” 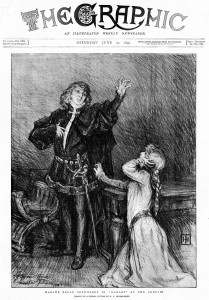 The Graphic, June 17 1899. Bernhardt as Hamlet with Marthe Mellot as Ophelia

After performing in London, Bernhardt and her company gave one performance at the Shakespeare Memorial Theatre in Stratford, a matinee on Thursday 29 June 1899. On 16 June the Stratford Herald reported that she was performing in Stratford “to gratify her desire to play here”, and had made an advance visit. The day of performance was to be most exciting. A special train brought the company up from London, and both the railway station and the principal streets were decorated with flags and streamers. Marie Corelli met the train, presenting Mme Bernhardt with “a magnificent bouquet with tricolour ribbons, bearing greetings in French”. Most of the extensive news coverage concentrated on her reception more than her performance, but the Birmingham Post commented on Bernhardt’s “intense dramatic power” while complaining that the prose of the French version “seemed out of character in the poet’s Birthplace”.

The Birmingham Gazette ventured some criticism: “too short a time the philosopher and too much the man of wrath and vengeance”. “Mme Bernhardt…puts his passion in the foreground, and every monologue becomes a diatribe. Her Hamlet is a man in constant frenzy, possessed with the one thought of avenging his father’s death. He is not mad, but maddened”.

In her book Rosemary for Stratford, Ursula Bloom tells what happened when Sarah Bernhardt visited Shakespeare’s tomb without any prior warning. The appearance of the great star who spoke no English threw some of the staff into a panic. It was my grandfather, William Tompkins, sub-sacristan at the church, who “came to the rescue” with schoolboy French. “The imperturbable Tompkins…stepped forward and bowed deeply to the lady. “Madame, bon apres-midi,” said Tompkins, with an elegant gesture of the hand which he supposed also to be French.”

“Sarah Bernhardt greeted him with an almost embarrassing exuberance. He had not a clue as to what she said, but there seemed to be a great deal of it. He led her up the aisle to the choir stalls, his black cassock brushing the pews as he went. Then, coming to a standstill, again he waved his hands. “A la tombe, a la monument,”, said he.”

Bernhardt’s Hamlet was very different from what English theatregoers were familiar with. In Stratford, earlier in 1899, Frank Benson had given the entire Folio Hamlet, performed over an afternoon and evening in what came to be known as the “eternity” revival. Benson’s Hamlet, performed several times over the previous ten years or so, “had developed acute melancholia”, acted at “a tardy pace”. 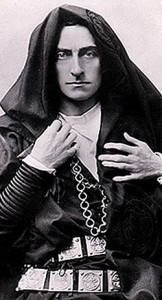 Another famous Hamlet was that given by Henry Irving. Performed in London in 1874 it was triumphantly revived with Ellen Terry as his Ophelia in 1878. Irving’s biographer, Brereton, described his Hamlet as having a “troubled, wearied expression”, a man “of a highly nervous and sensitive disposition; The terrible events which occur have the effect of unhinging the man’s mind, but …nothing can alter the inherent disposition of Hamlet. He must always be a gentleman..”

Londoners of the 1890s would probably have had most in mind Johnston Forbes-Robertson’s “heaven-born Hamlet”. He was a “sweet prince”, “affable” and “genial”, eminently sane but at times filled with a gentle melancholy. Some missed Hamlet’s wildness, but Forbes-Robertson has gone down as one of the greatest of Hamlets, though perhaps without Sarah Bernhardt’s undoubted charisma.