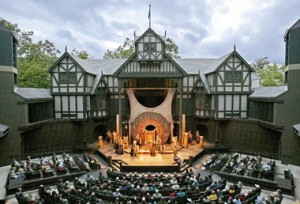 A week or so ago the Oregon Shakespeare Festival, one of the oldest and largest US Shakespeare festivals, announced they have commissioned “translations” of 39 Shakespeare plays into contemporary English in order to make them accessible to the public. I first spotted the argument on the US website SHAKSPER, the Global Elctronic Shakespeare Conference, where a number of comments have been posted, mostly deploring this move.

I wasn’t aware that this story had gone beyond the world of academia until Monday morning when Radio 4’s flagship news programme Today featured it with an interview with Andrew Dickson, author of Worlds Elsewhere: Journeys Around Shakespeare’s Globe, and Greg Doran, Artistic Director of the Royal Shakespeare Company. It begins 2hrs 26 minutes in.

It was an interesting, and rather surprising discussion, Andrew Dickson actually regretting that as he has not experienced Shakespeare in modern English. “I’ve never encountered Shakespeare as a contemporary”, by contrast with people from other countries for whom Shakespeare always speaks with a modern voice.

Doran took a different view, counting himself lucky to be able to read and understand Shakespeare’s language as it was written. Although Shakespeare is “robust enough” to stand up to being translated, Doran is, not surprisingly, unconvinced. “Translation gets the sense and there’s so much more going on” in Shakespeare’s dense language. With translation a choice has to be made between “meaning, pace and poetry” and modern versions are in “flat, banal, everyday English”.

Both men talked about performance: Doran suggested that it was worth taking the trouble to learn Shakespeare’s language, but that many of the difficulties could be erased if the plays were performed by skilled and experienced actors. Dickson suggested that every performance was in its way a translation because of the thousands of choices made by directors when interpreting Shakespeare’s works. 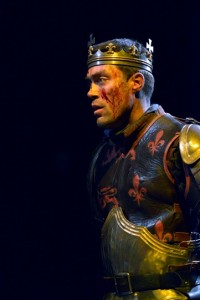 I happened to go to Doran’s production of Henry V later on the same day, and couldn’t help thinking about what had been said. Doran’s productions always put stress on the language rather than the visuals, and this time he’s often chosen to leave his actors alone on stage with nothing but the words, as with Henry’s speech to the Governor of Harfleur. In order to persuade the Governor to submit and admit the besieging English army, Henry usually surrounds himself with his commanders who put on a show of force and back up his threats of violence.

Not this time: Henry, quite alone, has nothing but his words. The audience has to listen to his threats, that don’t sit comfortably with the idea of Henry as a noble leader, and decide what to make of them:
What is’t to me, when you yourselves are cause,
If your pure maidens fall into the hand
Of hot and forcing violation?

The Chorus, Oliver Ford-Davies, ambles on to address us like an elderly academic. His are some of Shakespeare’s finest speeches and as Doran suggests, in Ford-Davies’s hands it’s hard to imagine why anyone would want to substitute modern language for this magnificent stuff:
Suppose within the girdle of these walls
Are now confined two mighty monarchies,
Whose high upreared and abutting fronts
The perilous narrow ocean parts asunder.
Piece out our imperfections with your thoughts.
Into a thousand parts divide one man
And make imaginary puissance.
Think, when we  talk of horses, that you see them
Printing their proud hoofs i’th’ receiving earth.
For ’tis your thoughts that now must deck our kings. 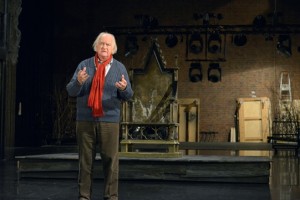 Going back to SHAKSPER, one of the contributors to the debate was none other than James Shapiro, who I can only think must have written his article en route between Stratford and Washington DC.

Shapiro’s diagnosis: “The problem is not the often knotty language; it’s that even the best directors and actors — British as well as American — too frequently offer up Shakespeare’s plays without themselves having a firm enough grasp of what his words mean.” He suggests that translations will be in some ways more difficult for actors to work with: “To understand Shakespeare’s characters, actors have long depended on the hints of meaning and shadings of emphasis that he embedded in his verse. They will search for them in vain in the translation: The music and rhythm of iambic pentameter are gone. Gone, too, are the shifts — which allow actors to register subtle changes in intimacy — between “you” and “thee.” Even classical allusions are scrapped. Shakespeare’s use of resonance and ambiguity, defining features of his language, is also lost in translation.”

Finally, what’s needed is more emphasis on the words: “Shakespeare borrowed almost all his plots and wrote for a theater that required only a handful of props, no scenery and no artificial lighting. The only thing Shakespearean about his plays is the language. I’ll never understand why, when you attend a Shakespeare production these days, you find listed in the program a fight director, a dramaturge, a choreographer and lighting, set and scenery designers — but rarely an expert steeped in Shakespeare’s language and culture.”

If you’d like to read the rest of Shapiro’s case it’s there on the SHAKSPER site,  and for the sake of balance, here’s another view.

2 Responses to Shakespeare lost in translation?