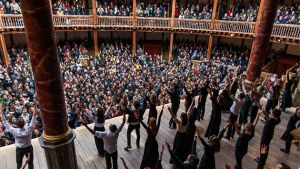 One of the images illustrating the British Council’s new course

Into the new year it’s time for starting something afresh. With this being such a big year for Shakespeare, there are several online courses beginning soon that aim to increase participants’ interest in and knowledge of Shakespeare, and I’ve picked a few to look at.

First of all, because it begins on Monday 11 January, is FutureLearn’s new course Exploring English: Shakespeare and run by the British Council, in association with the Shakespeare Birthplace Trust.  Unlike other MOOCs, this one is aimed at helping to improve English language skills using Shakespeare’s works.

It will “look at the life and works of William Shakespeare and take you from his Birthplace in Stratford-upon-Avon to the Globe Theatre in London, from where he secured his central place in English literature.

“We will look at five of Shakespeare’s plays with the help of actors and experts from around the world. They will explain and explore the universal themes Shakespeare addressed in his work. The plays are: Romeo and Juliet, Hamlet, Much Ado About Nothing, The Tempest and Macbeth. “

The tutor, Anthony Cosgrove, will look at some of the words and expressions that were coined by Shakespeare, which have since become part of the language. The FutureLearn page suggests that the course “is for people who are learning English and interested in the language and legacy of William Shakespeare. The material is designed for non-native English speakers who have studied English to around intermediate level” But don’t be put off if you are a native English speaker: the video on the homepage shows that it’s not just for those learning English, but for anyone who wants to learn more: as the introductory video says:“Shakespeare lives in language”. 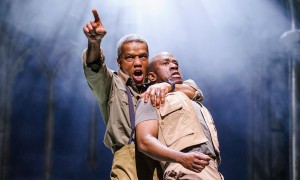 Hugh Quarshie as Othello and Lucien Msamati and Iago, RSC 2015

It’s still a little way off, but the University of Birmingham/RSC collaboration coming up on 22 February is going to be essential viewing. Othello: in Performance is another FutureLearn course running over four-weeks in which “you will discover how the performances and interpretations of Othello have evolved from its first performance in 1604 to the present day. You will find out what influenced performance choices then and now, and how specific themes within the text have been addressed at different moments in history.” It will begin by looking at the play as a whole then focus on three big issues: the significance of race, the role of women, and tragedy as a form. The course will focus on the RSC’s 2015 production of Othello, examining several scenes from that production. The MOOC is designed for A-level learners, but as with many online courses, it will be just as interesting for those who are not in full-time education.

It’s a great privilege to have access to a whole range of educators from the RSC, Shakespeare Birthplace Trust and the University of Birmingham’s Shakespeare Institute who will talk about different aspects of the play and guide learners through the material. 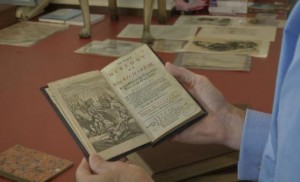 Image for Shakespeare and his World

Incidentally, you can still register your interest in past FutureLearn courses: presumably they will re-run them if it’s going to be popular enough. One of these is the Shakespeare and his World MOOC run by Professor Jonathan Bate of the University of Warwick in collaboration with the Shakespeare Birthplace Trust. I thought this was a terrific course and if you’d like to try it register here.

This last one is a bit different, planned by Allston James of Monterey Peninsula College. It’s a wholly online course that is available for anyone to join regardless of educational status, and launches in early spring. Unlike offerings through FutureLearn, potential students have to register through the college proper, and charges apply. International students also might have problems with the live streaming of video, but this blog gets enough North American readers to make it worth mentioning.

So what’s it about? The aim is to stream three film adaptations of Shakespeare plays and discuss them in an online forum. They’re particularly hoping to pick up people who have already studied Shakespeare and not enjoyed it. As they put it “the fault was not yours. Most teachers have no idea how to teach Shakespeare”. Here’s a summary from the website:

“Macbeth, Hamlet and King Lear are three of the world’s great masterpieces. What do they have in common? For one thing, they each center on family issues (to say the least). Also, the plays all involve deep romantic passion, out-of-control violence, and timeless moral lessons. What’s not to like?”

If you want to follow it up the official title is Shakespeare Visions (Shakespeare on Film) and the course identifier is ENGL 16 (0257). Registration is open at Monterey Peninsula College . Allston James has taught Shakespeare for many years and as a playwright is winner of the 2015 British Theatre Challenge in London.

Plenty to keep anyone interested in Shakespeare occupied for a while: I’m going to be featuring lots of Shakespeare-related events over the next few months.

2 Responses to Shakespeare online for 2016