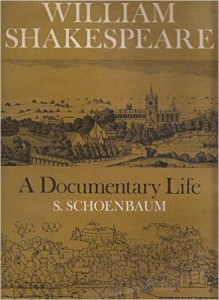 A couple of weeks ago I acquired, from a second hand book dealer, a copy of a book I have long coveted, Samuel Schoenbaum’s William Shakespeare: a Documentary Life. This book was published in 1975 and when I began work at the Shakespeare Centre Library, as it was then, the book already stood in prime position in the Reading Room where over the next 30 years it was probably the most heavily-used volume, always called on when there was any kind of query about Shakespeare’s life. No matter how many other, newer biographies were written, finding out what Schoenbaum had said was essential.

The reason was partly because Schoenbaum managed to be sane, scholarly and entertaining all at the same time, but the glory of the book was the reproduction of the documents. Schoenbaum wasn’t the first biographer to reproduce documents: most included illustrations of a handful at least, but here they were large, sometimes spreading over more than one page and even folding out beyond the edge of the book. The book itself was large, allowing for the documents to be read, not just enjoyed as decoration. It was expensive, and it seemed an unnecessary extravagance to buy one, particularly since the text and some of the illustrations were published in the smaller version William Shakespeare: a compact documentary life. 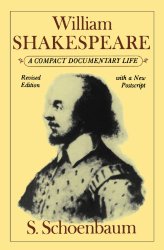 The only drawback to the book was that the documents were not transcribed, though Schoenbaum naturally explained what they said and why they were important. But a transcript would have been a help particularly for those like me who had never mastered secretary hand. With so many illustrations he was able to include both manuscript and printed sources, that often support (and sometimes contradict) each other. For instance, in discussing the Charlecote deer-stealing legend he reproduces, on the same page, two early sources for the story: Nicholas Rowe’s 1709 account of Shakespeare’s life that appeared in his multi-volume edition of the plays, and Richard Davies’s manuscript, known to have been written a few years earlier and now in the Bodleian Library. Schoenbaum goes on to list and reproduce several other versions from the eighteenth century. Bringing them all together and setting them in front of the reader made it possible to straighten out the complex web of stories that gained momentum in the centuries following Shakespeare’s life. 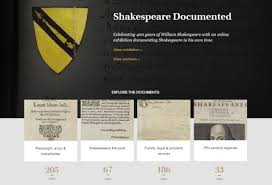 It’s slightly ironic that I’ve finally acquired a copy of Schoenbaum’s book of documents in the same year as a website, Shakespeare Documented, has been launched to make those documents freely available in an online exhibition. This collaborative exercise celebrating the 400th anniversary of Shakespeare’s death is masterminded by the Folger Shakespeare Library in Washington, DC, with the help of the many other institutions who also hold the originals. The main contributors are the Bodleian Library, the British Library, the Shakespeare Birthplace Trust and the National Archives, but a full list of partners is available here.

This is a terrific resource, described on the website as “the largest and most authoritative collection of primary-source materials documenting the life of William Shakespeare (1564-1616), bringing together all known manuscript and print references to Shakespeare, his works, and additional references to his family, in his lifetime and shortly thereafter. Nearly 500 references, found in roughly 400 print and manuscript documents, provide a rich portrait of Shakespeare as a professional playwright, actor, poet, business man, and family man who lived in both London and Stratford-upon-Avon. These documents trace Shakespeare’s path to becoming a household name, from the earliest reference to his father in Stratford-upon-Avon, a bustling market town in Warwickshire, in 1552, to the publication of his collected plays, now known as the “First Folio,” in 1623, to the earliest gossipy references to Shakespeare in the following decades.”

For each items there is an image, which can be examined in close detail, a description and a transcript, made by experts. I notice that the documents contributed by the Shakespeare Birthplace Trust have been transcribed by former Archivist Robert Bearman who has also published his own book on Stratford’s Shakespeare records.  The documents include:

103 manuscripts that refer to William Shakespeare by name in his lifetime (spelled in many different ways, which was typical of the period), including four manuscripts signed by him, and one letter addressed to him

89 printed books and manuscripts from Shakespeare’s lifetime that mention or quote his plays or poems, or that refer to him directly or indirectly as a writer

34 Stationers’ Register entries for Shakespeare’s plays and poems, up to and including the First Folio (1623), five of which name him as author

84 printed editions of Shakespeare’s plays and poems, up to and including the First Folio (1623), 62 of which include his name on the title-page or dedicatory leaf

The Folger Shakespeare Library is to be congratulated on making available material that will assist current and future scholars, students and the curious. For me, it won’t replace Samuel Schoenbaum’s wonderful book, but it will certainly complement and enrich it.