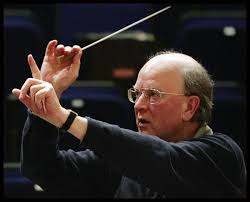 I’ve just heard the sad news that the great Guy Woolfenden died on 15 April. For anyone who attended the Royal Shakespeare Company’s productions from the 1960s to the 1990s Guy’s music was very often the soundtrack to the play. I believe he achieved the distinction of being the only person to have composed music for all of Shakespeare’s plays, some more than once. His website, Ariel Music, contains masses of information about his work. There is a YouTube channel devoted to it. 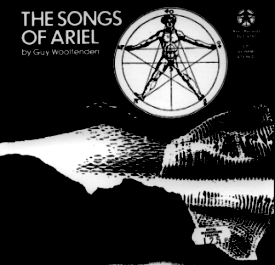 Music for Shakespeare of course includes all those songs that are included in the plays: “It was a lover and his lass” often ends up as a sort of production number, contrasted with quiet, unaccompanied songs like the Welsh song in Henry IV part 1, or Ophelia’s songs in Hamlet. Many of Woolfenden’s songs had lovely melodies, like the luscious Philomel song in A Midsummer Night’s Dream.What a composer writes for a singer in a play depends partly on the abilities of the actor, and he must have been thrilled when a young Ian Charleson was cast as Ariel in The Tempest in 1978. Charleson had the most glorious, ethereal voice, and in response Woolfenden wrote a series of beautiful, and demanding songs that were recorded and sold in the theatre, and have become very well known in their own right. There is an added poignancy to the songs because Ian Charleson, an actor who seemed to have everything, died tragically young. A version is available on YouTube with some photographs of the production. Looking at them just now reminds me that the late Alan Rickman, who died just a couple of months ago, was also in this production. Playing on this recording is another much-loved RSC musician, the wonderful Michael Tubbs, who also died almost a year ago. 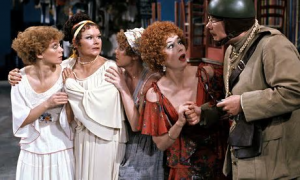 The Comedy of Errors 1976 with Judi Dench and Richard Griffiths

Woolfenden’s work, inevitably, was extremely varied. He must have written dozens of fanfares for entrances and loud pieces to be played during battle scenes, of which there are so many in Shakespeare’s plays, as well as dances for ball scenes in Romeo and Juliet and Much Ado About Nothing. The music he wrote for Trevor Nunn’s musical version of The Comedy of Errors in 1976 was very much of its time, but songs like “Beg thou or borrow” are still fun, and a reminder of the cheeky inventiveness of the whole production. I must have seen it at least half a dozen times (the filmed version does not do justice to it). Even Michael Billington says this is his favourite production of the play, recalling the twin Dromios Nikolas Grace and Michael Williams leading the musical finale “Let’s go hand in hand”.

His music rightly takes its place in a selection Sweet Swan of Avon, consisting of music for Shakespeare written from the eighteenth century onwards. It was recorded in 1995 by English Serenata, a group consisting of musicians who have worked at the RST in Stratford, and conducted by Guy himself.

In May 2015 Guy’s life and achievements was celebrated at a special concert at the Swan Theatre, which he was able to attend, at the end of which he made a touching appearance on stage, blowing kisses. It was a wonderful opportunity, rarely given, to be able to thank an outstanding creative artist for the pleasure he had given.