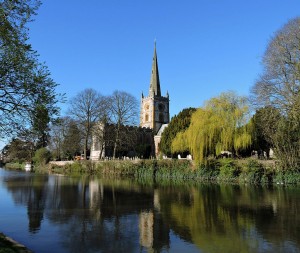 I’m writing this on the eve of the 400th anniversary of Shakespeare’s death and 452nd anniversary of his birth, having just begun the weekend of celebrations in the best possible way with a wonderful concert in the church in which Shakespeare was baptised and buried.

The concert was Shakespeare Odes, by Ex Cathedra. I was most excited about the performance of Garrick’s Ode to Shakespeare, performed on 7 September 1769 in the Jubilee Pavilion Garrick had build rather too close to the banks of the “soft-flowing Avon”. The words of the Ode and the airs that punctuated it were published many times, but much of the music written by Arne, and conducted by him on the day, has been lost so Sally Beamish has written new music to make the concert possible. The performance of the Ode, in particular Garrick’s delivery of the poetry, was the highlight of the Jubilee. For this performance we had one of our finest actors taking the role of Garrick in the shape of Samuel West.

The final lines of the Ode, sung by the Chorus, are particularly appropriate for the celebrations of Shakespeare’s Birthday:
We will his brows with laurel bind,
Who charms to virtue human kind:
Raise the pile, the statue raise,
sing immortal Shakespeare’s praise!
The song will cease, the stone decay,
But his Name,
And undiminsh’d fame,
Shall never, never pass away.

The second half of the evening was an unexpected delight: the world premiere of A Shakespeare Masque, music written by Sally Beamish to words by Carol Ann Duffy, the Poet Laureate. This, delightfully, brought performers to all corners of the church, including schoolchildren from three local primary schools: Wilmcote, Snitterfield and Loxley. A fabulous evening, well deserving of the standing ovation given it by the audience of the packed Holy Trinity Church.

The performances are being repeated at the Town Hall Birmingham, on Sunday 24th April, Hereford Cathedral on 6 May, in Wolverhampton on 7 May, London of 12 May and Southwell Minster on 28 May. The concert was broadcast live on BBC Radio 3, and filmed by BBC Arts where it can be watched on demand, worldwide, at www.bbc.co.uk/shakespearelives, and, in the UK, via the BBC iPlayer.  More information about the other concerts are available on the Ex Cathedra website. 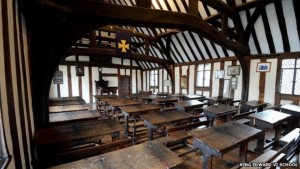 On the 23rd April there is to be complete Shakespeare overload, with BBC Radio 3 and BBC TV broadcasting too many programmes to mention, and many, many events in Stratford. The traditional procession is very well known and the town is expected to be even busier than usual. One series of new events that people might miss is a number of free performances of Unperfect Actors: a 30-minute celebration of sonnets, songs and extracts from the works of Shakespeare, performed by the all-boy theatre company Edward’s Boys, in the newly-restored Shakespeare’s Schoolroom and Guildhall at 1pm, 2pm and 3pm.

I hope you’ll enjoy your day, whatever you are doing, and raise a glass to the Immortal Memory of William Shakespeare.