The Gibraltar Stone: Shakespeare and the Royal Marines 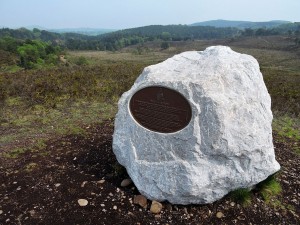 Shakespeare is so pervasive that no matter where you go you are likely to find reference to him or his works. I was surprised, though, to find one on a piece of heathland in Devon, known as Woodbury Common. Here, a white stone is visible on high ground looking over a scrubby valley marked on the map as a disused firing range. Approaching it, I found it was the Gibraltar Stone, dedicated in only 2015. It reads:

This stone commemorates all the Royal Marines, Royal Marine Commandos, and All Arms Commandos who since 1940, have trained here at Woodbury Common and gone on to serve their Crown and Country around the Globe “Per Mare Per Terram”. 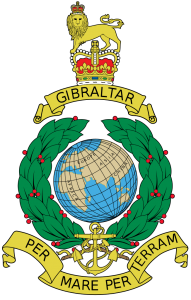 The badge of the Royal Marines

In the valley to your front lies part of the Endurance Course, one of the Commando Tests, and the remains of a World Ward II firing range.

Anyone visiting the eastern side of the Exe estuary will notice the Commando Training Centre Royal Marines at nearby Lympstone  The Royal Marines, the UK’s amphibious light infantry force, were originally the Royal Navy’s infantry troops. 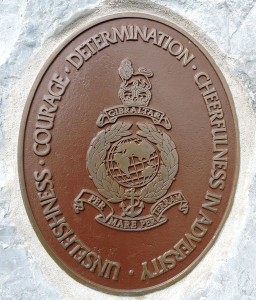 The plaque on the back of the Gibraltar Stone

On the back of the stone is another plaque, showing the badge of the Royal Marines in greater detail. It’s made up of a number of elements, each marking a point in the history of the Royal Marines: the Lion and Crown at the top of the badge denote a Royal regiment, conferred by George III in 1802 ” in consideration of the very meritorious services of the Marines in the late war.” (the War of the Spanish Succession, one of many European wars).  The Laurel wreath honours their gallantry at the capture of Belle Isle in 1761 (a conflict with France). The anchor, incorporated in 1747, shows that the Corps is part of the Naval Service. The motto, Per Mare Per Terram (By Sea By Land) dates from 1775.

The capture of Gibraltar in 1704 was the most famous of many successful campaigns, but was chosen to represent them all, alongside the image of the Globe and the latin motto. Surely, though, the “Great Globe”, with the following word “itself”, is a quotation from Shakespeare’s play The Tempest, where Prospero speaks of “the great globe itself” (Act IV Scene 1, l 153). The dedication records that it was King George IV, in 1827, who awarded the Royal Marines this badge. 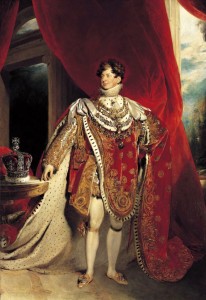 King George was a great lover of Shakespeare, history and pageantry so it isn’t surprising that he came up with a Shakespearean reference in order to recognise their outstanding service. Nothing could be more appropriate or more patriotic than to link them with the words of the national poet. George was interested in regalia and the symbolism relating to it, as can be seen from the coronation portrait he commissioned showing himself magnificent in his furs and jewels, including, very prominently, the Order of the Garter, the oldest and highest order of Chivalry. The Order is celebrated on St George’s Day, 23rd April, which George adopted as his official birthday, and is also Shakespeare’s Birthday. George was often mocked for his love of show, and his ability to spend vast amounts of money on projects like the Royal Pavilion in Brighton, but he was also a cultivated and intelligent man. His love of Shakespeare was sincere, acquiring a copy of the First Folio for the Royal Library at Windsor.

There are probably few Shakespeare fans among the Royal Marines today, but it would be nice to see the connection between the regiment and our greatest writer acknowledged. The virtues taught to every Royal Marine, “courage; determination, unselfishness and cheerfulness in the face of adversity”, are also those displayed by Shakespeare’s King Henry V.