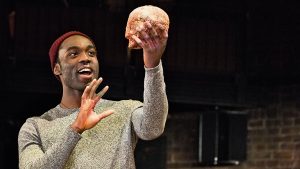 On 13 August it was the last performance of the latest production of Hamlet at the Royal Shakespeare Theatre in Stratford. Every production of this play is notable, but particularly this time because Hamlet was played by a man of Ghanaian parentage, Paapa Essiedu, the first black actor to play the part in an RSC production.

He has been universally praised: the Independent commented that:

Paapa Essiedu, at the comparatively precocious age of 25, is in thrillingly unforced command of the role, radiating the impudent charisma, energy and wounded idealism of youth. 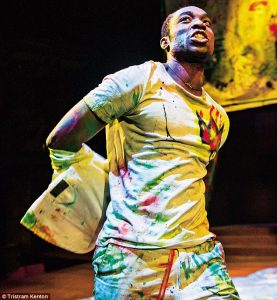 In his pretend madness, this Hamlet swaps funereal garb for a weirdly paint-sprayed, skull-emblazoned white suit.  Jean-Michel Basquiat’s subversive graffiti-art has heavily influenced Paul Wills’s design and Essiedu calmly vandalises the court with his aerosol can.

The Telegraph simply proclaimed “a star is born” and although the Daily Mail used adjectives that would normally be critical: “sulky and surly” and “bolshie”, they judged the production and its leading man a considerable success.

Essiedu has been much-interviewed: the Standard published his views about how important it is for the stage to represent the world we live in, and this extended half-hour interview about the role and the influence of his Ghanaian background was recorded by Heather Neill for Theatre Voice.

Paapa Essiedu isn’t the first black Hamlet in Stratford, however, as in 2006 Janet Suzman’s South African production of the play was performed in the Swan Theatre with Vaneshran Arumugam taking the leading role. 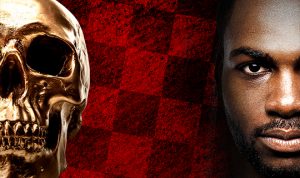 Publicity photo for the all-black Hamlet

And soon the first tour of an all-black Hamlet gets under way from September to November 2016, a co-production by Black Theatre Live in association with Watford Palace Theatre and Stratford Circus Arts Centre (London). The production is being directed by distinguished actor Jeffery Kissoon. Black Theatre Live is a consortium of eight English theatres in Northumberland, Suffolk, Derby, London, Margate, Peterborough and Poole, aiming to transform perceptions. The theatres have been selected to be an eclectic mix, in parts of the country where the population is predominantly white or consists of a mixture of black and asian communities. It was set up “with the simple aim of changing hearts and minds about the intrinsic quality and value of Black, Asian and minority ethnic produced theatre”. 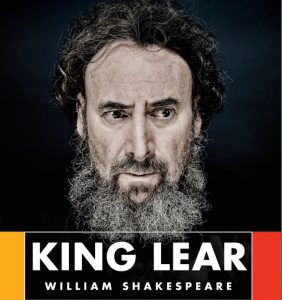 But now, exactly a week after taking his last bow as Hamlet, Essiedu is back on the stage of the Royal Shakespeare Theatre again as the villainous Edmund in King Lear, starring Antony Sher and directed by Gregory Doran. Currently in preview, this production will be in Stratford until 15 October (live streamed to cinemas on 12 October) and will then be seen at the Barbican in London from 10 November to 23 December.

Essiedu understudied the role at the National Theatre when Simon Russell Beale played the lead. During the last preview he had to take over the role mid-performance as Sam Troughton suddenly and completely lost his voice. He had not long left drama school but took over the role with complete composure, and the event was widely reported in the media. Hopefully he will perform during the run without mishap.

If you’re interested in finding out more about the contribution black and asian people have made to Shakespeare in performance in the UK, you should take a look at the British Black and Asian Performance Database. This includes details of 1629 people in 1222 productions of Shakespeare since 1930. It is the most concrete lasting legacy of the University of Warwick’s British Black and Asian Shakespeare project, and largely the work of Dr Jami Rogers. She comments: “Students, teachers and academics will find it a rich resource for this little understood facet of theatre history. The database also tracks casting patterns and will provide a basis for understanding how cultural stereotypes have sometimes inhibited parity in classical theatre for the same performers the Multicultural Shakespeare project celebrates.”