New digital projects for all

Posted on September 1, 2016 by Sylvia Morris 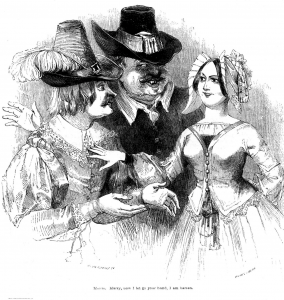 New digital projects relating to Shakespeare keep on being launched, even during the summer break.

I’m particularly interested in Shakespeare illustration, so I love the Victorian Illustrated Shakespeare Archive that features over 3000 illustrations from four major Victorian illustrated editions of Shakespeare. There is a full description of the project in this post by Johann Gregory at Cardiff University. He notes “Michael Goodman, a PhD candidate at Cardiff University, has painstakingly scanned, tagged and prepared these images and made them available under a creative commons license for others to play around with.” Gregory notes how differently the artists concerned have interpreted Shakespeare’s characters and scenes. Given that most people in the nineteenth century encountered Shakespeare as a writer to be read, rather than a playwright, these illustrations must have been influential, giving readers clues about how to interpret characters and scenes. 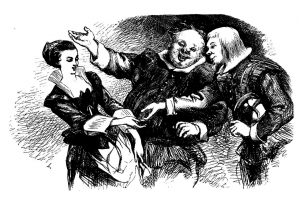 The Dalziel brothers’ version of the scene from Twelfth Night

Take the illustration of Aguecheek, Toby Belch and Maria from Twelfth Night in the 1846 engraving by Kenny Meadows. While Maria looks like a spirited girl who can look after herself, Toby Belch leers at her in a lascivious way that makes me feel uncomfortable. The image of the same trio twenty years later in 1867 by the Dalziel brothers shows Belch sozzled rather than lecherous, and Maria more genteel, cautiously leaning away, a very different interpretation of the same scene.

At about the same time from 1864-68, H C Selous was creating dreamy, almost religious, painterly illustrations like the one of Prospero in The Tempest. You can see how, at around the time of the Shakespeare Tercentenary, the plays and the man himself became more respectable, celebrated up and down the country with elaborate festivities. An interview with Michael Goodman about the archive and why it’s important is at this website. 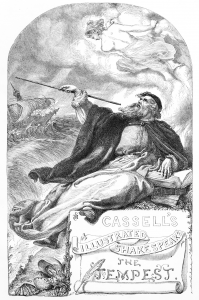 Prospero in The Tempest by Selous

One of the issues for Goodman has been the debate about how far the images, scanned from books over 150 years old, should be manipulated and cleaned up. It’s a question that those digitising historic material have to ask, and one that is worth thinking about for anyone using these online resources. Goodman has strong feelings about it, so if you want to find out more here’s a link to a discussion about the project and its methodology. It’s worth noting that the images that make up the project are available to be freely used though, writing as someone who is happy to follow the rules as long as it’s easy to do so, I wasn’t at all clear what kind of credit was required for the images. I, clearly, aim to give publicity to the site so am including links, but I wish it was easier to understand the Creative Commons licensing system.  Goodman’s archive is designed to bring to light thousands of little-known images, for anyone to use but particularly for the academic community. 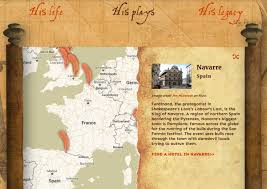 Being from the travel company Expedia it’s only to be expected that after the information about the place you’ll be offered the chance to find out about hotels nearby. So if the maps and information have whetted your appetite you can carry on to book somewhere to stay.

The site is far from exhaustive: where are the references to Paris, a city that features in several plays (All’s Well That Ends Well, Henry V, Hamlet among others), or to Cyprus, the location for much of Othello? Both of these are heaving with places to stay, though Milford Haven, the setting for the end of Cymbeline,is a more understandable omission. There must be dozens of other Shakespeare festivals and locations mentioned in the plays that would be more than happy to be added to the site for the publicity it would bring. Having said all that this is a fun site that those who are looking for somewhere unusual to go with a Shakespeare connection will enjoy.