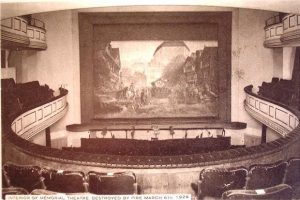 A couple of weeks ago I was browsing the Stratford-upon-Avon Then and Now Facebook page when I spotted an unusual image posted by David Mills. With nearly 2000 members, this group demonstrates the level of interest there is in images of Stratford-upon-Avon and members share a wide range of professional postcards and family snaps.

The image David Mills posted was interesting because it showed a little-remembered feature of old Stratford, the act drop curtain painted for the 1879 Shakespeare Memorial Theatre. In Victorian theatres, the act drop was a painted canvas mounted on a frame that was lowered during scene changes to conceal onstage activity. They were usually decorative, because the audience would have to look at them for several minutes. For the new Memorial Theatre an act drop was commissioned from one of the top scenic artists of the day, William Roxby Beverley (or Beverly). I’m grateful to retired RSC Head of Stage Roger Howells for explaining to me that it would have been  painted on canvas in London, probably at Drury Lane itself where they had the necessary equipment, before being rolled up and brought to Stratford and nailed to its frame. 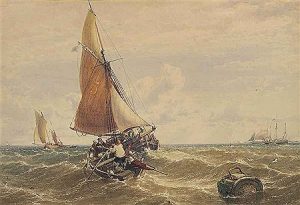 Beverley came from a theatrical family. His father was a well-known actor-manager and all his five children worked in the theatre at some time. William, born around 1810, was the youngest son. Like his brother Henry, William acted onstage but in July 1831 he began painting scenes for the Theatre Royal in Manchester which his father managed. Many of the backdrops required for the theatre were scenes, and when he wasn’t painting for theatres William painted atmospheric land and sea-scapes, often shown at the Royal Academy. While, as far as I can tell, none of his theatre work still exists, and little of it was ever photographed, existing paintings can be found here.

By the 1840s and 1850s his work was being compared favourably with that of the great theatrical artist Planche, and in 1854 he began an association with Drury Lane Theatre that was to last twenty years. As well as painting spectacular scenery, particularly for pantomimes, he worked on a number of Shakespeare revivals including King John, Henry IV part 1, Macbeth, Antony and Cleopatra and Richard III, but apart from the scene-drop he seems not to have worked for the Shakespeare Memorial Theatre. 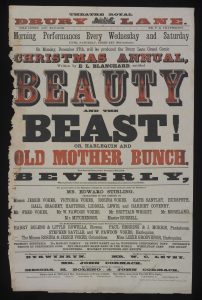 This playbill, for a Christmas pantomime Beauty and the Beast, at Drury Lane Theatre in 1869, boasts “with new and characteristic scenery by William Beverly whose personal services are now exclusively devoted to illustrating the productions of this Theatre”. His name is on the bill in letters much larger than those for the author and actors. It is now kept at the Victoria and Albert Museum.

On his death in 1899 the Daily Telegraph obituary described him as the ‘long acknowledged chief and doyen of English scenic artists’, also praising his ‘noble water-colours done in leisure hours.’ Ironically it’s on these, rather than the painting that made him famous, that his reputation now depends. But we do, too, have images of the act-drop he painted for the Stratford theatre. It appears on photographs, and, in colour, on a postcard, rather oddly as a portrait rather than landscape-shaped image. Strangely his entry in the Dictionary of National Biography does not mention the Stratford act-drop. 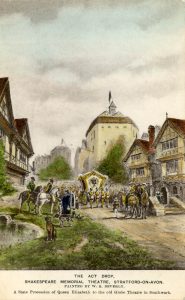 Painting used as drop between acts at the Shakespeare Memorial Theatre, showing a state procession of Queen Elizabeth to the old Globe theatre in Southwark. CC-BY-NC-ND Image Courtesy of the Shakespeare Birthplace Trust

It shows the imaginary scene of a state procession of Queen Elizabeth to the old Globe Theatre in Southwark. On its first appearance during the opening performance the act drop was applauded. The Stratford Herald  described it “In the foreground is Alleyn, a great friend of the Bard, who is talking to the Earl of Leicester and standing near him is the Earl of Southampton. They are supposed to be having a chat respecting the play, before leaving their horses with their pages and entering the theatre”. The Daily News said “the scene is animated, the composition picturesque, and the colouring brilliantly harmonious”. A postcard of the act drop, printed in colour, is held at the SBT Library and Archive (SC67/46).  Repaired in 1895 and partially repainted in 1903, it met its end during the fire that destroyed the Memorial Theatre in 1926.

Photographs of the interior of the 1879 building show that its decoration was austere and it has often been compared to a non-conformist chapel, misleadingly implying that it was uncomfortable and probably cheaply furnished. In fact Charles Flower’s intention was always that the building would be a fitting tribute to Shakespeare, decorated with high-quality materials. Details that still exist in the newly-restored “Swan wing” like the stained glass windows, oak panelling and stone-carved fireplace illustrate how this aim was achieved. The act drop, by a leading artist of the day, was another beautiful feature, designed to impress but sadly now forgotten.