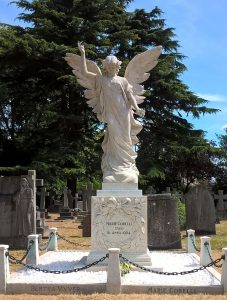 The monument to Shakespeare in Holy Trinity Church was put in place by 1623, and has been visited by tourists almost ever since. Over the past four centuries it has occasionally suffered damage, and has been restored several times. At least, though, its location high on the wall in the chancel has protected it. Back in 2012 another statue to a famous writer who died in Stratford-upon-Avon was not so lucky. Marie Corelli’s memorial, a large statue of The Angel of the Resurrection, was positioned near the entrance to the town’s modern cemetery where it could be seen from the road, and during the night vandals climbed over the railings, pulling the statue off its plinth and causing it severe damage.

With the romantic novelist no longer the celebrity she had been during her lifetime (she died in 1924), it might have been difficult to raise the money to restore the statue. But she has a local champion in the shape of Nick Birch. One of Corelli’s flights of fancy was to import from Italy a gondola, complete with Italian gondolier, that she took out on the Avon on summer days. Lost for many years, this is now owned by Nick Birch who runs Avon Boating, a company that hires boats on the river, and occasionally puts it on show. He runs a website dedicated to the writer and I’ve written a piece about the story of the gondola. 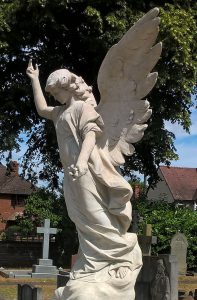 Birch took the lead and received a grant from Stratford Town Trust to ensure the restoration could take place. Although it had been badly damaged, with one of its wings broken off, the statue is now returned to its full beauty and on 7 July 2017, a ceremony took place returning it to its original spot. Carried out as the result of local enthusiasms, it’s also satisfying that the old firm of local masons Clifford and Sons put the statue back in place. The story is told here.

In order to celebrate the statue’s return, and to inform people of the town’s link with Marie Corelli, Nick Birch is giving a free lecture at 6.30pm on 19 July 2017 at Stratford-upon-Avon Town Hall entitled Marie Corelli, the Life Literature and Legacy of Stratford’s “Great Little Lady”. His talk will be illustrated with photographs, illustrations and extracts and there will be a reception at the end with an opportunity to buy books and biographies about her. 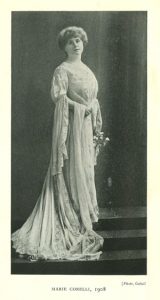 On her arrival in the town Marie Corelli was celebrated as the most famous author of her day. She had chosen to make her home in Stratford because of its Shakespeare connections, and took part in the activities of a number of organisations, including its Shakespeare Club. The recently-published book The Story of the Shakespeare Club of Stratford-upon-Avon 1824-2016: Long life to the Club call’d Shakspearean, notes her involvement:

Corelli was one of the first celebrity members of the Club joining in December 1901. Two years before she had moved into Mason Croft in Church St. and was settling into her role as grande dame, patron and benefactor in the town. She was invited to respond to the toast to art and literature at the 1903 Birthday luncheon, and spoke with her customary coyness:˜The mayor had asked one of the least among the students of literature to respond for the greatest of professions” one who was moreover altogether the wrong sex to undertake such a responsibility”, she was reported as saying in the Stratford-upon-Avon Herald (24 April). By November she had, more robustly, resigned from the Club, a result perhaps of her single-minded campaign to defend historic Stratford. That year her opposition to the location of a new public library in Henley St. a few doors from Shakespeare’s Birthplace made her enemies throughout the town and especially among the Trustees of the Shakespeare Birthplace Trust whom she described as “brewers and retired tradesmen who really care nothing at all about the Poet’s scarred fame”. Some of them, G.M. Bird (wine merchant),  W.G. Colbourne (proprietor of the Red Horse Hotel) and George Boyden (editor of the Stratford-upon-Avon Herald), were also members of the Shakespeare Club. It ended in the defeat of her libel action at Birmingham Assizes in December 1903.

The joint authors of the book, Susan Brock and Sylvia Morris, are giving a fully-illustrated talk about the history of the club, including links and memorabilia relating to Marie Corelli, at 7 for 7.30 on 27 July at The Old Slaughterhouse, at the back of Sheep Street, Stratford-upon-Avon. For more information email info@escapearts.org.uk