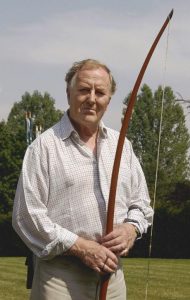 On Thursday 3 August 2017 one of the UK’s best-loved actors, Robert Hardy, died. His family described him as “Gruff, elegant, twinkly, and always dignified” and most of his admirers would agree. I remember him best as Robert Dudley in the 1971 TV series Elizabeth R to Glenda Jackson’s Queen, just one of his many roles. Late in life he found an entirely new audience through the Harry Potter films.

Although Shakespeare did not feature greatly in his later career, as a young man he was immersed in it, spending several years performing at the Shakespeare Memorial Theatre, in London and on Tour. Like many people of his generation his career necessarily stalled when he was called up during the Second World War. He had previously been a student at Oxford where he had become friends with Richard Burton. After the war he returned to University and completed his degree, then became an actor.

He was taken on in 1949 by Anthony Quayle to work at the Shakespeare Memorial Theatre to play a string of small parts in plays such as Cymbeline and Henry VIII. The following year he continued to work at the SMT, appearing in Measure for Measure and King Lear. In 1951 he took part in Anthony Quayle’s triumphant cycle of four history plays from Richard II to Henry V, celebrating the Festival of Britain. Hardy played Hotspur in Richard II and Henry IV Part 1 and Archbishop Scroop in Henry IV part 2, as well as Fluellen in Henry V, reuniting him with old friend Richard Burton who was playing Henry V. During these years he also performed, first as Friar Francis and then as Claudio, in revivals of John Gielgud’s production of Much Ado About Nothing.

During this period Hardy worked on a large variety of Shakespeare’s plays with many of the best actors and directors at work of the 1950s: not just Gielgud, Quayle and Burton, but Peter Brook as the director of Measure for Measure, Michael Redgrave, Peggy Ashcroft and Gwen Ffrangcon-Davies. Also in the company were other young and talented actors such as Barbara Jefford and Alan Badel. 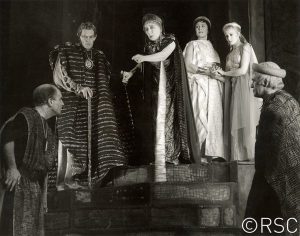 In the 1980s Sally Beauman described the performance conditions of the time: only four weeks was allowed for rehearsals, with brief technical and dress rehearsals, and  no previews. The theatre could not be closed for a single night when a new production was brought in. Actors were used to this “baptism of fire” and it was to stand Hardy in good stead when he moved into TV.

After this period with the SMT ,which included a spell in the West End, he played Laertes to Richard Burton’s Hamlet and Ariel in a production of The Tempest. He returned to the SMT for the 1959 season, the starriest that had ever been seen in Stratford-upon-Avon. Paul Robeson was to play Othello, Laurence Olivier Coriolanus, Dame Edith Evans as Volumnia, and the Countess of Roussillon in All’s Well That Ends Well, Charles Laughton both King Lear, and Bottom in A Midsummer Night’s Dream and Mary Ure played Titania and Desdemona. In this amazing line-up Robert Hardy was tribune Sicinius Velutus in Coriolanus, Oberon in A Midsummer Night’s Dream, the aging King of France in All’s Well That Ends Well and Edmund in King Lear.

The following year Hardy was offered the opportunity to work with Peter Hall, the newly-appointed Director of the Stratford theatre, shortly to be renamed the Royal Shakespeare Company. He declined, apparently disappointed with the range of parts offered. 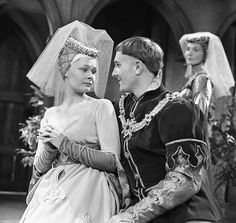 Judi Dench (Princess of France) and Robert Hardy (Henry V) in An Age of Kings, 1960

Another door immediately opened. The BBC was undertaking the screening of Shakespeare’s history plays in fifteen live episodes, one a fortnight, in 1960. It was an extraordinarily ambitious project, as John Wyver says “An Age of Kings remains the only occasion when a single company and production team has taken on for television all eight of Shakespeare’s major History plays.” More than three million viewers regularly tuned in. With only two weeks between screenings the actors were allowed four days to learn lines and just a week’s rehearsal, then a couple of days for camera rehearsals before the live broadcast. Even though Henry V, with its battle scenes, suffers from being staged in a studio, Robert Hardy’s Henry V was one of the great successes of the project. Clips of his wooing of the French Princess (Judi Dench) are available on YouTube and after many years of being unavailable the whole series was finally released on DVD by Illuminations in 2013.

Less well-known than his acting, Hardy was also an expert in the history of the longbow, the weapon which won the battle of Agincourt for the English.  He was consulted by archaeologists involved in the raising of Henry VIII’s flagship, the Mary Rose, also presenting a TV documentary and writing two books on the subject, and was Master of the Worshipful Company of Bowyers in the late 1980s.

In the SMT season brochure for 1951 he was described as “A young actor from whom great things are expected”. Robert Hardy fulfilled all these expectations and more, and we are particularly lucky that some of his Shakespeare work remains accessible.

2 Responses to Robert Hardy and Shakespeare