Playbills in the spotlight

The British Library’s Digital Scholarship blog has today, 9 November 2017, launched their new crowdsourcing site In the Spotlight. This project encourages the public to help transcribe information about historic performances from the BL’s major collection of theatrical playbills dating from the 1730s to the 1950s. I first saw an announcement of this project a couple of months ago.

I’ve long been a lover of playbills, some of the most ephemeral of materials, always printed on flimsy paper in a wonderful variety of styles. They bear witness to developments in theatrical entertainment as well as the evolution of printing techniques. Early bills were small, text-only and factual, while later bills could fold out into several pages, and included illustrations and vivid descriptions of what was on offer.

A combination of publicity material and programme, people made their own collections, but just as easily could have used them to start the fire in the grate the day after the evening out. The very first production of Shakespeare known to have been performed in Stratford is recorded in a single playbill that is now in the Folger Shakespeare Library in Washington, DC. It was for a performance of Othello, at the Town Hall on 9 September 1746. There is no other surviving record of the performance but because of the bill we know it was put on by John Ward and his company (Ward was to be the grandfather of the great actress Sarah Siddons). We also know that it was designed to raise funds to restore “the curious original monument and bust of that incomparable poet, erected above the tomb that enshrines his dust, in the Church of Stratford upon-Avon Warwickshire [that] through length of years and other accidents become much impair’d and decay’d”. 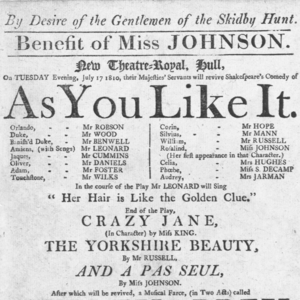 Quoting from the website,  “these playbills list entertainments at theatres, fairs, pleasure gardens and other such venues. Small ‘handbills’ were circulated amongst theatre-goers enjoying the performance while larger ‘great bills’ were posted on walls and windows. The Library’s collection of approximately 234,000 playbills has been bound into over 1000 volumes, some of which have been digitised – and now we need your help to bring them back into the spotlight.”

“These playbills offer a wealth of historical detail with thousands of personal names of actors, playwrights, composers, and theatre managers. Less well-known and even forgotten plays are preserved alongside popular performances and much-loved dramas. Some of these plays may not have been independently recorded in printed form, while some songs may not have been committed to any printed score – transcribers may well discover previously lost plays or songs.”

Their interest to Shakespeare-lovers is obvious. Shakespeare is the author whose plays have been most consistently performed over the centuries since he worked. Many performance histories have been written, but working on the BL’s collections, covering many regional theatres as well as those in London, is certain to expand our knowledge of what was being performed, when, by whom and in what form. If you want to join in the fun, go to the website and sign up.

Back in May 2017 the Folger Shakespeare Library that I mentioned above also wrote a piece about how they are trying to get to grips with their collection of over 200,000 playbills. [If you want to read it you may have to search for “playbills” as the most recent post comes up first]. They haven’t yet taken the plunge into photographing the bills and allowing people to mark them up or enter information as the BL has, but they are working on entering data from their old card catalogues onto their online catalogue so that at least some information can be found, with bills being grouped by theatre. In her post Sarah Hoyde explains the limitations of the current approach: “The records…don’t include exact dates for the playbills at this time, identification of the playbills’ printers, or any information about the shows or actors they advertise.” Plenty of scope for the future there then!

Having worked with the relatively modest (only around 15,000) collection of playbills kept at the Shakespeare Centre in Stratford myself I’m very aware of the pitfalls for cataloguing: bills are often not dated, there are masses of inconsistencies in the names of theatres, the names of plays, authors and performers (some of whom adopted stage names). Their fragility also means that handling has to be kept to a minimum: just working through a folder or box containing playbills inevitably adds to wear and tear.

I’m thrilled, though, that attention is being given to these neglected items, often dismissed as ephemera but that convey the excitement and immediacy of live performance across the centuries.