Shakespeare and the actors 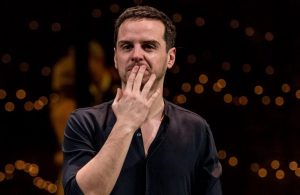 The annual Olivier Awards ceremony took place on 8 April 2018, and this year, sadly, there were no awards for any Shakespeare productions. Even more unusually, there were only three nominations, all for Robert Icke’s production of Hamlet at the Almeida: Andrew Scott for Hamlet, Tom Gibbons for Sound Design and the whole production for Best Revival.

When it opened at the Almeida the production received outstanding reviews and transferred to the much larger Harold Pinter Theatre. The production so successful it was recorded and screened over the Easter weekend. If you’d like to catch up with this production it will be available on BBC IPlayer until 30 April, and in case the whole thing is too much there’s also a clip of Andrew Scott performing “To be or not to be”.

Scott’s performance, and the production as a whole, could not avoid comparison with that of Benedict Cumberbatch as both are stars of the BBC’s Sherlock. When Cumberbatch performed Hamlet at the Barbican Theatre in 2015 tickets were snapped up almost immediately and on its live cinema relay it was said to have been seen by 750,000 worldwide. The production hit a number of problems not least the overwhelming audience reaction that led to Cumberbatch having to plead with them not to record the show on their phones. There was also a feeling that it was a “five-star Hamlet trapped in a three star show”. Icke wisely avoided this possibility by engaging a top-notch cast.  Some of the reviewers, perhaps expecting Hamlet to be a star vehicle, were surprised to find that the play is much improved by being performed by a uniformly strong company. There are links to some of the reviews here, here and here.

Maybe Andrew Scott didn’t get the Olivier award because he’s just not an attention-grabbing actor. There is certainly no drop in interest in Shakespeare and the actors who bring his words to life. In fact at the moment there is a great deal of focus on individual actors who are sharing their thoughts about performing his major roles. 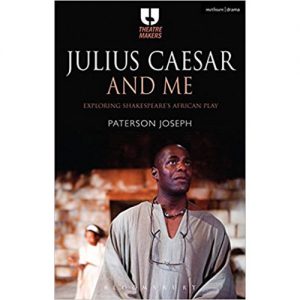 Julius Caesar and Me, by Paterson Joseph

Back in 2012 the RSC staged a production of Julius Caesar with an all-black cast. The experience greatly affected Paterson Joseph who played Brutus, as he has now published a book in which he writes about of rehearsing and performing the role. He’s also thought deeply about the play and its wider importance in the world today. The book is entitled Julius Caesar and Me: Exploring Shakespeare’s African Play. This post from the Folger Shakespeare Library’s Shakespeare and Beyond blog contains an extract from the book in which he discusses the translations of Shakespeare made by Julius Nyerere, the leader of Tanzania. And here’s a link to a TV interview with Paterson Joseph in which he talks about playing the part.

Also just published, by Nick Hern Books, is Antony Sher’s book Year of the Mad King. For King Lear, as for his other major Shakespeare roles, Sher has kept an account of his preparations, the rehearsals and the performances, illustrating it with his own drawings. Nick Hern Books have published a post based on the book.The original production was in 2016, but it is currently being revived and this RSC production is now playing at BAM in New York until 29 April. 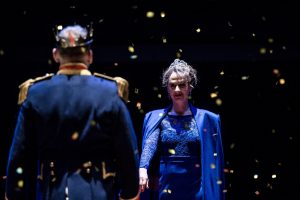 Another leading actor in a major Shakespeare role who’s been talking about her experiences is Niamh Cusack, 2018’s Lady Macbeth for the RSC. From 9-13 April Radio 3 Essential Classics included interviews with her, talking about her varied career in music, theatre and TV including her current work. They’re not easy to find but the interviews are available on BBC Iplayer until the end of April.

Finally, In McKellen is taking part in a live event broadcast to cinemas nationwide on Sunday 27 May, his own birthday weekend. Entitled Ian McKellen: Playing the Part it will be hosted by Graham Norton. It’s not quite clear what the live element of this will be, but the website tells us:

Built around a 14 hour interview, Playing the Part uncovers McKellen’s story. From his upbringing living through the war, working through repertory and West End theatre becoming a pioneering stage star, coming out and being a leader in the campaign for equality, to his mainstream film breakouts as Magneto and Gandalf. His work and influence transcends generations, celebrated here in this fully authorised insight.

McKellen: Playing the Part features unprecedented access to private photo albums, a wealth of never-before-seen archive material, including diaries written when he was 12, and unseen behind the scenes of theatre shows and films, alongside his personal thoughts on a life long lived.

The summary doesn’t mention his Shakespeare work but it’s been such a central part of his career that McKellen it is sure to figure. Shakespeare may not have won any awards this year but he’s still an integral part of the lives of many of our best actors.